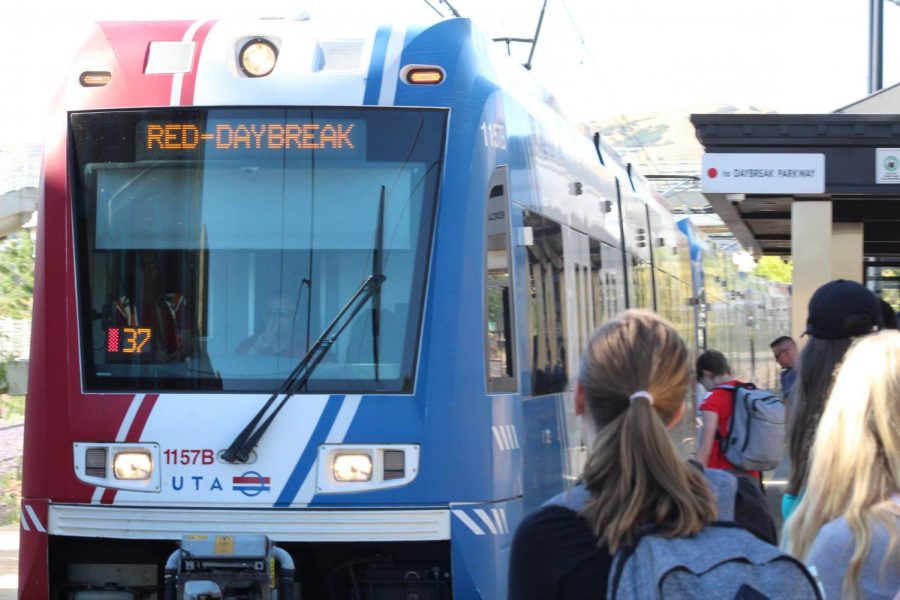 Riders prepare to board Trax in Salt Lake City on Aug. 27, 2019 | Chronicle archives

Salt Lake City is trying to keep up with the population and ensure everyone can go where they need to safely. The government advertises “zero fatalities” as a golden goal, but there’s already been nine Utah traffic fatalities in 2020. What exactly is the state hoping to solve to reach that zero goal? The Utah Department of Transportation, the Wasatch Front Regional Council and University of Utah students had a lot to say on what they believe are the real problems.

Why Are There Problems?

“Utah’s road system is one of the best in the United States,” Knowlton said. According to him, this is because the state invests a lot on roads and the state’s leaders are proactive. The leaders need to continue being so to keep up with demands that come with a growing population.

“Over the next 30 years, we’re going to see Utah’s population double. And we need to be making smart decisions for the future and planning ahead for all that growth,” said John Gleason, a spokesperson for UDOT.

According to Gleason, Utah adds 58,000 people every year. To put that in perspective, it’s almost double the student body of the U, and equals the population of the city of Taylorsville.

“Eventually we’re not going to be able to build [roads], or do we want to? We’re going to double the size of our population. We don’t want to double the size of our roads,” he said. “We have to encourage other methods of transportation. Pedestrian and bike traffic, taking transit is huge. So, we’re looking with all of our projects to how we can incorporate those forms of transportation into those projects.”

Knowlton singled out Interstate 15 as a key transportation facility that can no longer be widened. “As you widen and add lanes the marginal benefit of the additional lanes goes down. So, two skinny roads are a lot more powerful than one really wide road, in terms of moving people,” he said. Utahns often see that I-15 is constantly under construction.

“We are starting to see a lot more growth in new valleys,” Knowlton said. “That means those commuters are commuting a much longer distance. And when you add those commutes onto our transportation system, it puts a lot more burden on [it].”

State-wide Issues
On Friday, Jan. 24, two people were killed when an elderly woman drove down the wrong side of Utah’s Interstate 215, colliding with on-coming traffic.

“Unfortunately, we have a number of wrong-way driver’s incidents that happen quite frequently,” Gleason said. “We don’t usually have a terrible tragedy that results in those cases, but we are always looking to improve signage, to let people know these are exits. That, you know, you’re not supposed to enter here.”

“Safety should become an even bigger priority in the planning and execution of our transportation system,” Knowlton said. “[Safety] is something that [the Utah Department of Public Transportation] cares a lot about.”

The Wasatch Front Regional Council wants to “build consensus and enhance quality of life by developing and implementing visions and plans for a well-functioning multi-modal transportation system, livable communities, a strong economy, and a healthy environment,” according to the mission statement in their website.

“But, UDOT and cities, when you drill down to the details, they say they care about safety but will often prioritize other outcomes other than safety more than I think they ought to,” Knowlton said. “When you have roads going through town, we tend to prioritize speed over safety more than we should.”

Along with speed on city roads, Knowlton singled out distracted drivers as another safety concern. He acknowledged the responsibility of finding a solution to the problem of distracted drivers falls more on the state legislature than it does the state’s department of transportation.

“We could have substantially stricter laws that penalize or fine when people are caught driving distracted,” Knowlton said. “Utah still lacks in laws and enforcement relative to other states [when it comes to policing distracted driving].”

California is one of the states that has stricter laws against driving distracted when compared to Utah, he pointed out. He explained that drivers in California are too afraid of the consequences of using their phones while they drive, while in Utah that isn’t the case.

“There are too many potholes and the lack of streetlights make it hard to see at night,” said Amanda Currie, U senior and biology major, who believes there are more problems than just distracted driving when it comes to the safety of Utah’s roads.

“I used to commute so that was very problematic,” said Kaylon Draney, a junior in material science and engineering. “I would take TRAX because of it. Still, even on campus, especially going up to the dorms, that main road going to Officer’s Circle, there’s a ton of potholes, which is annoying.”

“I’ve noticed a lot of potholes,” said Curtis Sessions, a grad student in material science and engineering. “I mean just right by my apartment on 13th East so it’s pretty scary. I’ve noticed this a lot more this year for some reason.”

“I think it is a good idea. The roads and infrastructure do need improvement,” Currie said.

Hoping to Solve It
“We [UDOT] generally have around 180 to 200 projects every year that look to improve traffic flow and hopefully get people to where they’re going more efficiently and safely,” Gleason said. “Safety is our top priority.”

Students had their own ideas on what the focus of some of the projects could be.

“I would say what needs to be done is better pedestrian access,” Sessions said. “When I walk every day, I cross at University Street and there’s no stop sign or anything. But there are two crosswalks and getting people to stop pretty much means that you have to walk out there and make them stop or they’re gonna hit you.”

The safety of the roads around campus and in Salt Lake City was brought to question. “Some people don’t stop anyway. I’ve seen cars stopped and a motorcycle will go around the cars and almost hit the pedestrian walking across. I think in general, in Salt Lake, with these big wide streets that have little usability for pedestrians, it makes it really hard to walk around everywhere,” Sessions said.

“In Utah, the lane markings are really bad. It’s like on the road, a little bit of rain, and suddenly you can’t see any of the lines,” said Erik Steenburgh, a senior in mechanical engineering. “I know in other states they’ve got like reflective paints and reflective bumps — even in states with snow, they’ve got reflect bumps. That would be a huge help to drive with.”

As for public transportation? “Buses also tend to do more harm than good. They also get stuck in traffic and take a really roundabout way to get through. So, you end up spending more time getting from A to B than just in your car,” Steenburgh said.

“TRAX could be improved,” Draney said. “We have basically three lines, and [there are] parts of the city that we can’t reach except on a bus,” he said. “It’s difficult for some of them [students] to get around and a lot of them could use the TRAX.”

Draney pointed out that taking TRAX is harder on weekends, with the different stop times and shortened schedule on Sunday making it difficult to get around.

There are also initiatives to bring forth issues Utahns face in regard to roads and transportation to make sure the people are heard. “There was a petition that was started — people asking if you can make it more reflective. … We’re always working on ways to improve: [the] reflectivity of the striping, and more weather resistant beads. … Those are things that we’ll continue to work on,” Gleason said.

More information on the Wasatch Front Regional Council can be found on their website and also see their Wasatch Choice 2050 map.