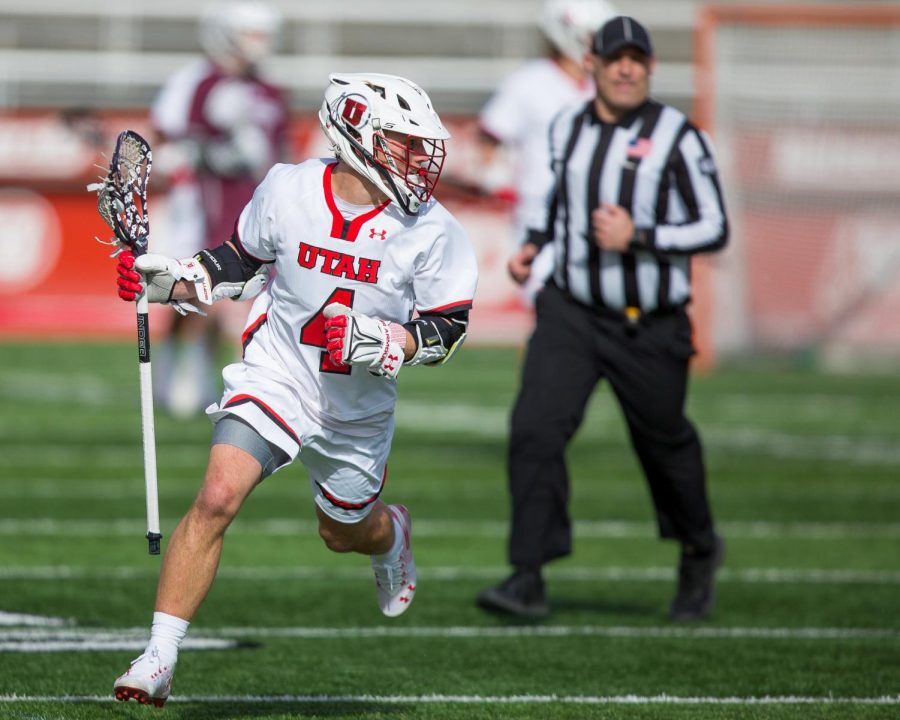 University of Utah Senior Jimmy Perkins (4) runs for a pass during an NCAA Lacrosse game vs. Bellarmine University at the Rice-Eccles Stadium in Salt Lake City on Friday, Feb. 1, 2020. (Photo by Abu Asib | Daily Utah Chronicle)

The University of Utah men’s lacrosse team put up a good fight in front of the home crowd at Rice-Eccles Stadium on Saturday but ended up falling to No. 17 Air Force 8-9.

First Half
The Utes saw a lot of success early on as senior and team captain Jimmy Perkins was able to rally three goals in the first period against Air Force.

“We knew we were playing a good goalie and we wanted to make our first few shots count,” Perkins said. “We preach a team game and we are playing our best offense when we move the ball and get our opportunities no matter who it is.”

Despite the early lead, Air Force seemed to always have a response for the Utes. The score was tied going into halftime 5-5.

Second Half
To begin the second half, Utah came out with a strong offensive push and Mac Costin scored to put the Utes up by one. Perkins then found the back of the net yet again on an acrobatic shot as the shot clock expired to give the Utes a 7-5 lead.

But from that point on, it would be all Air Force as the Falcons would finish the game with dominant ball possession on a 4-1 run. The Utes struggled to get stops and Air Force made the most of their opportunities, refusing to let Utah out of their defensive end for the majority of the fourth quarter.

The Utes had one final offensive push fueled by a diving goal from junior Josh Stout. This would cut the lead to just one with 2:23 left in the fourth quarter. Unfortunately for the Utes, that would be the final goal of the day, as Air Force’s defense stepped up big in the final minutes.

“We took good shots but we didn’t keep passing until we got that great shot,” Stout said. “There are certain times when you need a big play and you get away from the fundamental things by doing something silly that ends up costing you.”

The Utes drop to 1-2 on the season and back-to-back losses to Top 20-ranked teams.

Words from Coach
“I believe we are capable of beating these teams,” said head coach Brian Holman. “We’ve got to figure out how to take what we are learning from these games and get better. At some point we will break through to this next level of play.”

Next Week
The Utes will continue their home stand as they face Furman University (1-2) on Saturday, Feb. 22 at 12 p.m.