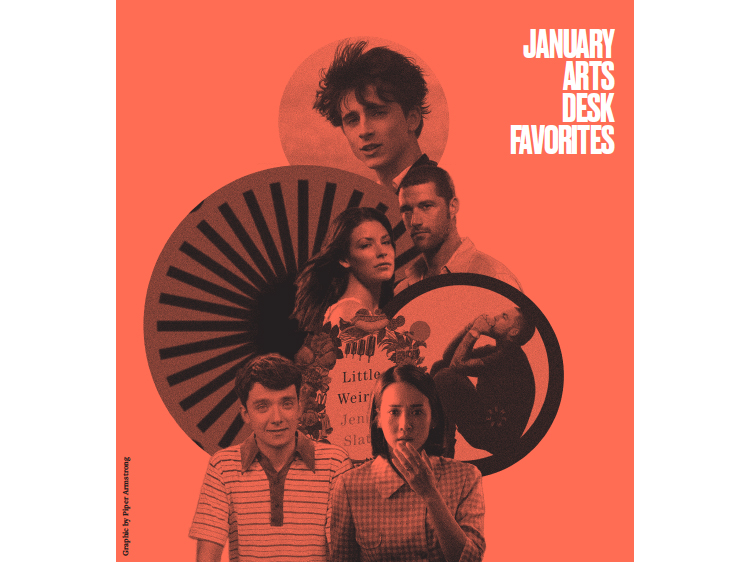 Palak Jayswal
The new year equates to trying new things, right? For me, the first new thing happens to be one of my favorites from this past month. “The Miniature Wife and Other Stories” by Manuel Gonzales is a book I was assigned to read in my creative writing workshop. As someone who sticks to one genre when reading (romance) I was pleasantly surprised to find out how much I loved this book. Its sci-fi-esque lens gives new insight to everyday events and it’s a delightful read sheerly because it’s so wacky.

Chris Payne
“Sex Education” — the hit British comedy-drama series from Netflix — dropped a second season this January, and I’ve been happily hooked again. This has been one of my favorite television shows ever, with a plot that is hilariously over the top while staying relatable and impactful with an equally phenomenal cast. Characters feel alive and important as the show progresses, and it’s all too easy to become invested in each person’s story and development. I’m still fitting episodes in between classes and assignments, but I’ve heard this second season is even better than the first. Trust this voice in a newspaper — watch it.

Hannah Keating
Knowing I’d spend much of Christmas break in transit, I decided to try a medium I hadn’t explored — audiobooks. This meant that January was spent completing some incredible stories after hours of listening. My favorite was “Little Weirds,” written and narrated by Jenny Slate. Something about the whimsical and vulnerable way each chapter is crafted around a moment of observation from her own life makes for an incredible listening journey. Slate’s extended metaphors for her identity and her experiences — involving everything from old dogs, ghost hauntings, red geraniums and deaths — made me fall in love with her transformation in this poetry-like memoir. I highly recommend it.

Parker Dunn
With the 2020 Oscars premiering early February, January for me was all about playing catch up and seeing all of the best picture nominees I apparently missed out on in 2019. Having only seen “Marriage Story” and “Joker,” I had a lot of work to do and a lot of homework to ignore. Aside from “Ford v Ferrari,” which I ended up not seeing: “Jojo Rabbit” surprisingly made me both laugh and cry alongside little German Jojo and his imaginary friend, Hitler; “Little Women” was also an emotional roller coaster;  “Once Upon a Time in Hollywood” took me back to an unfamiliar 1960s Hollywood; “1917” increased my appreciation and sympathy for soldiers of all nationalities; “Parasite” was a unique look at class discrimination; and “The Irishman” was 3 hours and 30 minutes long.

Abigail Bowé
This past month, one of my favorite art events had to have been going to the Sundance Film Festival. I had never been before, and the aura of the empty theatres filling in with audiences to see world premieres provided for a genuinely magical sensation. Tickets are less expensive than I thought — $27 for a show — and even then, a much higher price would be worth it. It’s important to support new and incoming artists and filmmakers. Besides, with stories to be told from numberless angles of life experience, joys, heartbreak and victories, watching good movies don’t just entertain us — they make us into better people.

Oakley Burt
My favorite January release is Mac Miller’s posthumous album “Circles.” I had been listening to Miller since his debut album “Blue Slide Park” in 2011. I watched him grow and evolve as an artist with each album. When he died in 2018 — a month after releasing “Swimming” — I was devastated. Miller had finally self-discovered on “Swimming,” and in the blink of an eye, he was gone, unable to grasp his full potential. Now, with “Circles,” Miller has given the world a little insight into where his artistic future was headed. It’s a beautiful companion piece to “Swimming” — a wispy, dreamlike album full of intimate and introspective tracks. “Circles” is a culmination of his artistry and a fitting end to his aspirational life.

Arielle Gulley
With the holidays over and the new school semester beginning, my mind was all over the place in January. I was excited for a new year full of new music from some of my favorite artists. An album I really enjoyed in January was Halsey’s “Manic.” The album has a lot of new sounds and really shows Halsey experimenting with different genres and musical styles than what is typically her norm. She explained that the album is reflective of her own struggle with bipolar disorder and the times she feels manic. The album contains hit singles put out in the last year like “Without Me” and “Graveyard” alongside some new material of hers. Suga from BTS, Alanis Morissette and Dominic Fike are some of the artists featured on the album, and if that doesn’t put into perspective the contrasting sounds this album brings, nothing other than listening to it will. The music is different from previous Halsey albums which may defer listeners, but I think it reflects her growth as an artist, and in my opinion, the album was a good listen.

Cade Anderson
Not only do I love the way “Lost” transports me to the unique world of every main character, but I also love the way it transports me back in time. Everything from the cargo shorts to the slightly grainy, oversaturated editing style is a relic of the way things used to be — and although I was way too busy watching “Suite Life of Zack and Cody” to even know this show existed when it originally aired, something about that early 2000s essence feels so safe and familiar to me. At the start of January, I was on the lookout for a mysterious, captivating TV series to immerse myself into and I’m happy I chose this one.

Kate Button
During the month of January, I happened to see “Little Women” in the theater on two occasions. In both cases, as I sat in the theatre, surrounded by some of my closest friends, Greta Gerwig’s adaptation of Louisa May Alcott’s novel came to life. As Gerwig plays with the story’s timeline, the audience is thrown into the narratives of the March women. Their lives are simultaneously chaotic yet full of love and hope. As a passionate exploration in desires for gender equality, Jo March’s story as a hopeful writer in antebellum America showcases an aspiration and talent for the arts, yet her battles through misogyny are powerful and demand attention. Despite seeing it once, as I returned to “Little Women,” the story still pulled on my heartstrings with the same intensity as my first viewing — and I can’t wait to see it again.