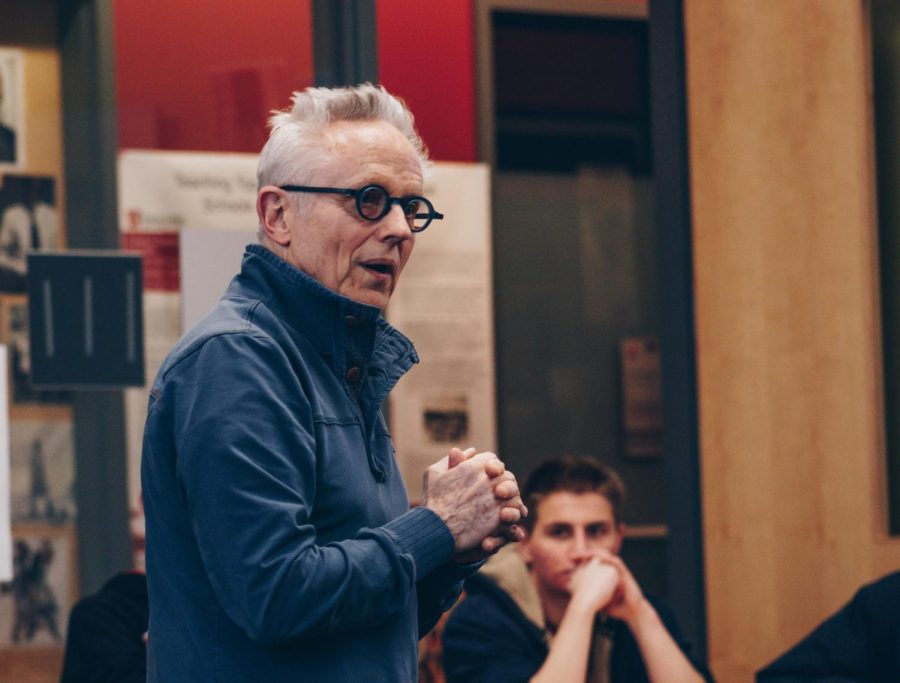 The Honors College’s Philip Bimstein has taught a variety of courses since he began as a part-time professor 10 years ago, from Praxis Labs about Alzheimer’s and aging to a meditation course titled Radical Quiet. Now Bimstein will become a full-time professor in summer 2020.

In high school, Bimstein’s folk and rock band was signed to Parrot Records label, a division of London Records. While they toured around local Chicago, the band didn’t find any major success, so Bimstein went on to the Chicago Conservatory and got a degree in theory and composition while he minored in piano.

His journey in music continued in his 1980s new wave and punk rock band, Phil ‘N’ the Blanks, which produced six music videos and three albums. Bimstein’s band had music videos on MTV, charted on Billboards and were reviewed in magazines such as Billboard, The New York Rocker and Playboy. They also toured around the Midwest and East Coast. Billboard called the band “snappy and relevant.”

After his band days, Bimstein went to UCLA and studied film scoring.

“I like change, once I’ve done something — I like to go in a different direction,” Bimstein said.

Over his decades of music, he was also commissioned to do a piece for the Salt Lake Alternative Music Festival, which he called “Garland Hirschi’s Cows” after the cows that mooed outside his house and their owner, and he has composed much more experimental music since then. He wrote a symphony for his partner and composed music which has been played in Carnegie Hall, Lincoln Center and more.

After UCLA, Bimstein moved to southern Utah, where he eventually became mayor of Springdale for eight years. “It had me notice that sometimes the way the town business was conducted or unfolded was similar to the way music worked,” he said.

Bimstein said a good dialogue between citizens worked in the same way a good jazz or blue brass band jammed together. While mayor, he received a large three-year grant by Meet the Composer, a New York non-profit that provides composers with the ability to live off of composing, which he used to make music that reflected the landscape and people of southern Utah.

A documentary aired on KUED about his life and the music he composed about southern Utah, which he said was a great success. The documentary won two Emmy awards, one for production and one for music composition.

Bimstein’s time as mayor and his music inspired by southern Utah gave him the idea for the first class he taught at the U, which is called Composing a Community, and he has been teaching it since 2010.

Rebecca Kenney, a first-year philosophy major, took Composing a Community in her first semester at the U. She is also currently taking Radical Quiet, another of Bimstein’s classes. Kenney said that all of Bimstein’s life experiences are important to his class and filter down through his teaching.

“He’s able to consolidate big academic ideas with music and art and politics in a way that makes them all feel relevant and interconnected with the experience of life,” Kenney said.

Bimstein said that while he only intended to teach that one class, over the years he has come up with ideas that he finds value in and the Honors College also does, such as Radical Quiet, which is based on contemplative ways of being and of observing the stillness but also helping someone to be a better student and learner.

“Coming to class is always a release from the stresses of daily life and learning to incorporate mindfulness in an academic setting is so important,” Kenney said.

After several years of teaching, Bimstein asked last year to be a full-time professor and will start as that this summer. “I just realized more and more that this is a community of people and of interests that I love being a part of,” he said. “I love being apart of the University of Utah, but particularly the Honors College because it has such a passion for the same things I do.”

Kenney said Bimstein is an asset to the U and that it is evident in the number of people that want to get into his classes. “Everyone wants to feel more present, more engaged, more connected, and his classes achieve that in a way that’s really personal and self-driven. He’s also just a great lecturer and has such a broad knowledge base to pull from,” she said.