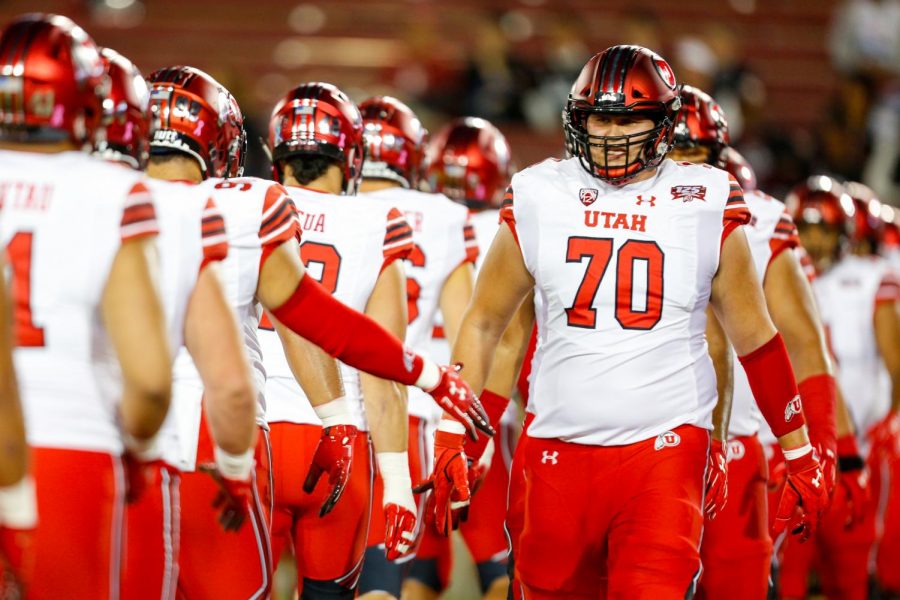 With seven minutes left in Super Bowl LIV, the Kansas City Chiefs trailed the San Francisco 49ers 20-10. It seemed as though all hope was fading and that the 49ers would walk away victorious. But fast forward through those final seven minutes, which included near-perfect plays, and the Kansas City Chiefs, along with former University of Utah offensive lineman Jackson Barton, had been crowned Super Bowl Champions with a final score of 31-20.

Barton was always destined for greatness. He was born to former Utah athletes Paul Barton (men’s football and baseball) and Mikki Kane Barton (women’s basketball and volleyball) who saw so much success of their own at the U. After their college careers, the Bartons decided to stay close to their alma mater and raise their family in the Salt Lake Valley.

Jackson Barton attended Brighton High School where he saw great success. He was named first-team 5A all-state as a junior and senior and second-team as a sophomore. He ended up as a four-star recruit by Rivals.com and ranked No. 7 nationally at his position and No. 1 overall in Utah. To no surprise, Barton would commit to play for the U and carry on his family legacy.

As a Utah Man, Barton was a four-year letterman, a two-year starter and was named first-team All-Pac-12 as a senior. Barton played in all 53 games since his redshirt freshman year including appearances on the line in 44 games with 29 starts. Following a great senior season, where the Utes would claim the Pac-12 South, Jackson would enter the NFL draft.

Barton was selected by the Indianapolis Colts as the 26th selection in the seventh round.

“Going through the draft was very surreal for me,” Barton said. “I was always on edge waiting for the phone call. I had been getting a lot of free agent deals from coaches who didn’t have picks, which I was grateful for, but when the draft call came, I was very grateful I got the opportunity to go that route.”

Jackson Barton’s younger brother Cody Barton was also selected in the 2019 NFL draft as the 25th selection in the third round by the Seattle Seahawks.

“Not a lot of people can say that they went through an NFL draft with their brother in the same year,” Barton said. “I’m very glad we got that experience and that’s something we can always cherish for the rest of our lives.”

After being selected by the Colts, Barton was named to the practice squad. It was just a short stint as Barton continually showed improvement and received several phone calls from different NFL squads. One of those squads was the Kansas City Chiefs, who were short on men and saw a lot of promise in the young rookie lineman.

Barton finally accepted the Chiefs’ offer after several phone call conversations and joined a team in the hunt for a Super Bowl. The Chiefs would finish the season with an impressive 12-4 record, finishing at the top of the AFC West.

The Chiefs found themselves in a familiar situation as they trailed the 49ers in the Super Bowl. But, just as before, the Chiefs stars came out to shine as Patrick Mahomes lead the Chiefs to three straight touchdowns and won the game 31-20.

“Everyone kept the course and had a good mindset because we’d been in tougher spots before,” Barton said. “Everyone knew that every play counted and we couldn’t stall any longer because if we did, it would’ve been the game. It was really cool to see this resilient team rise to the occasion.”

Barton is currently on a four-year $2.59 million dollar contract with the Chiefs. He has aspirations of becoming a starter but understands he has to work extremely hard to get there.

“I want to be a starter for the Kansas City Chiefs,” Barton said. “All I can do is get better and compete. But nothing is guaranteed. You’ve got to do the ordinary things extraordinarily. I hold my own destiny in my hands and I’ve got to go out there and take it.”

As Barton exits his rookie season as an NFL Champion, he looks to the future with high hopes of leaving an even greater personal legacy.