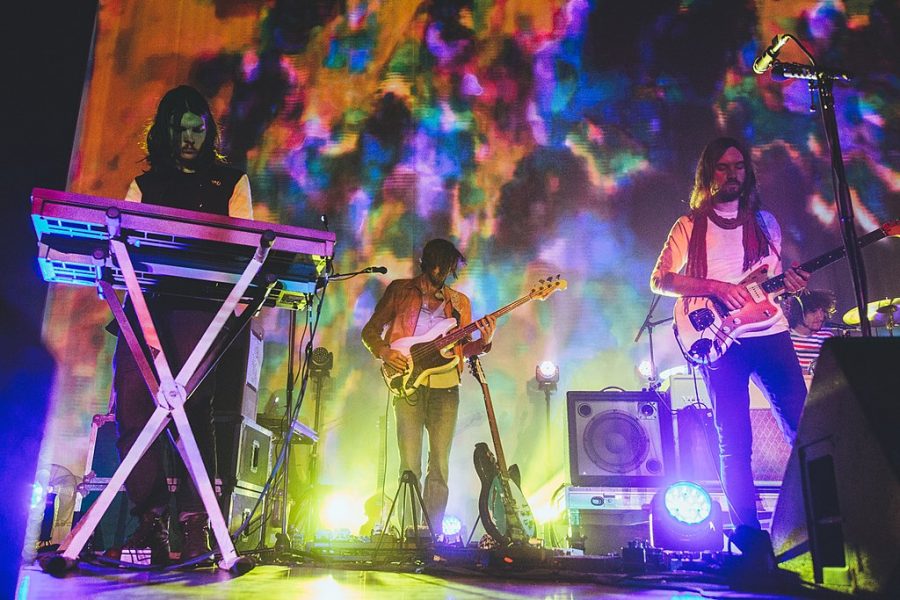 On Feb. 14, as a gift to music lovers worldwide, Tame Impala released their fourth studio album. Following a five-year hiatus from their previous album, “Currents” — which launched the band into 2010s rock fame with “The Less I Know the Better” — Tame Impala’s latest work showcases a carefully crafted love letter to the relationships that are able to transcend any temporal or linear bounds. Frontman Kevin Parker writes, records, produces and mixes all of the music. With “The Slow Rush,” Parker provides a more intimate space for his discussions of the changes and adaptations that time brings. Full of the iconic Tame Impala psychedelic rock, “The Slow Rush” also embraces influences from ‘70s pop, hip-hop and soft rock.

Track by Track
“The Slow Rush” opens with “One More Year” — a gentle introduction into the album’s time-centric thematic content. The track is airy while the lyrics point towards hopes for the future. As a newlywed, Parker wrote lyrics that have clearly been influenced by his relationship: “I never wanted any other way to spend our lives / I know we promised we’d be doing this ‘til we die.” This opening track leads into “Instant Destiny” — one of my favorite Tame Impala songs and one that further delves into the idea of fate and forever that accompany discussions of marriage. “Instant Destiny” begins with groovy hooks that reel the listener in, but it’s the slower verses that demand attention to Parker’s intimate reflections upon making the “crazy” decision to commit to forever.

Next on the album are “Borderline” and “Posthumous Forgiveness.” For the album, Parker reworked “Borderline” to punch up the bass lines and add more spacey production elements. Parker’s efforts to improve “Borderline” are successful in adding more cohesiveness to the album, but the fact that he has gone in to rework a song also reveals his own struggles with perfectionism. Coupled with “Posthumous Forgiveness” — a six-minute exploration of grief and loss — these two songs suggest feelings of anxiety for choosing the right course of action and regrets with past mistakes. Yet, as Parker sings, “I wanna say ‘it’s alright’ / You’re just a man, after all, / And I know you have demons / I got some of my own” — we all have our own flaws, but forgiveness can help us to transcend any wrongdoings.

Composing the middle tracks of the album are “Breathe Deeper,” “Tomorrow’s Dust” and “On Track.” Altogether, these three tracks successfully showcase the various time-based anxieties that Parker encounters — staying in the moment with “Breathe Deeper,” feeling nostalgic in “Tomorrow’s Dust” and looking towards the next step with “On Track.” In an interview with Triple J, Parker said, “Human relationships with time create so many different emotions — being obsessed with the past, being overwhelmed with nostalgia, being anxious for the future, confident about the future and living in the moment.” It’s clear that Parker has spent a significant amount of energy thinking about time and our relationships with it, but with “On Track,” Parker seems to have gained an optimistic view towards life. He sings, “Strictly speaking, I’m still on track / All of my dreams are still in sight / Strictly speaking, I’ve got my whole life.”

Following “On Track” is “Lost in Yesterday” — the last single released before the album dropped. In the same interview with Triple J, Parker shared that “Lost in Yesterday” centers around the idea that “nostalgia is a drug to which we are all addicted.” Coupled with a “Groundhog Day”-esque music video, “Lost in Yesterday” leans into themes of revisiting history through jazz-inspired rhythms and enchanting circular drum beats that persist throughout the track. As another single from the album, “It Might Be Time,” also appears in this latter half of the album — embracing ‘70s pop influence and finally deciding to confront the negative thoughts that may come with changes over time.

Some of the final tracks on the album, “Is It True” and “Glimmer,” suggest anxiety for the future and uncertainty with what will come next. While Parker is typically known to prioritize the drums in his works, these two tracks heavily feature strong bass lines that echo sentiments of struggling to stay true to yourself. On “Is it True,” Parker said, “Young love is uncertain. Let’s not talk about the future. We don’t know what it holds. I hope it’s forever but how do I know?” Compared to the other tracks of the album, “Glimmer” stands out in both its length and content. As an almost completely instrumental track, Parker uses the span of just two minutes to build themes of hope and desire for the future. “Glimmer” utilizes loops and explorative instrumentals as Parker plays with the idea that the future can also bring inspiring chances for change.

For the final track on “The Slow Rush,” Parker echos the beginning of the album, but from a new perspective within “One More Hour.” As the longest track on the album, Parker uses this song’s length to reveal that he has truly overcome his anxieties surrounding time. The track wanes in and out of crescendos and powerful pieces to stripped back, gentle and intimate verses. For his conclusion, Parker has begun to accept that he can only live in the moment as that’s all that he can control. The future may still be foreboding, but it no longer brings fear.

Final Verdict
In classic Tame Impala style, “The Slow Rush” heavily relies upon strong drum rhythms and spacey elements that create a psychedelic and detached perspective from which Parker analyzes his relationships with time. While he may have never expected to garner cult-like status and headline several festivals — including Coachella in 2019 — Parker seems to have taken his fame in stride and remains true to himself. On “The Slow Rush,” Parker pulls back the curtain to invite the listener into some of his most intimate and existential anxieties.

From the album, my personal favorite tracks are “Instant Destiny” and “On Track.” While I relate to the anxieties and worries that Parker illustrates, these tracks present a sense of optimism and acceptance of the here and now that I am still working towards. From the explorations within “The Slow Rush,” Parker has gained an aesthetic distance that has separated him from the obsessions over time. He has transcended these anxieties to reach a point where he can live in the moment. As the sole creator on every level of the album, “The Slow Rush” opens a window to Parker’s inner processes — and with “Instant Destiny” and “On Track,” we can see that Parker has reached a meditative point of peace.

In comparison to Tame Impala’s discography, “The Slow Rush” signifies a move towards a more honest approach to music production. For fans of Tame Impala, we have spent many years getting to know Parker and we’ve waited five years for this latest album. But “The Slow Rush” gives control back to Parker who then invites us into these moments of true emotional anguish. From trying to be a perfectionist to regrets for past and future actions, Parker has struggled with learning to stay present and in the moment.

“The Slow Rush” opens an avenue of intimate discussion, and its steps towards pop and dance genres indicate that Tame Impala will embrace the adaptability and change that can only come over time.