Tan France on Diversity and ‘Being that B—-‘ 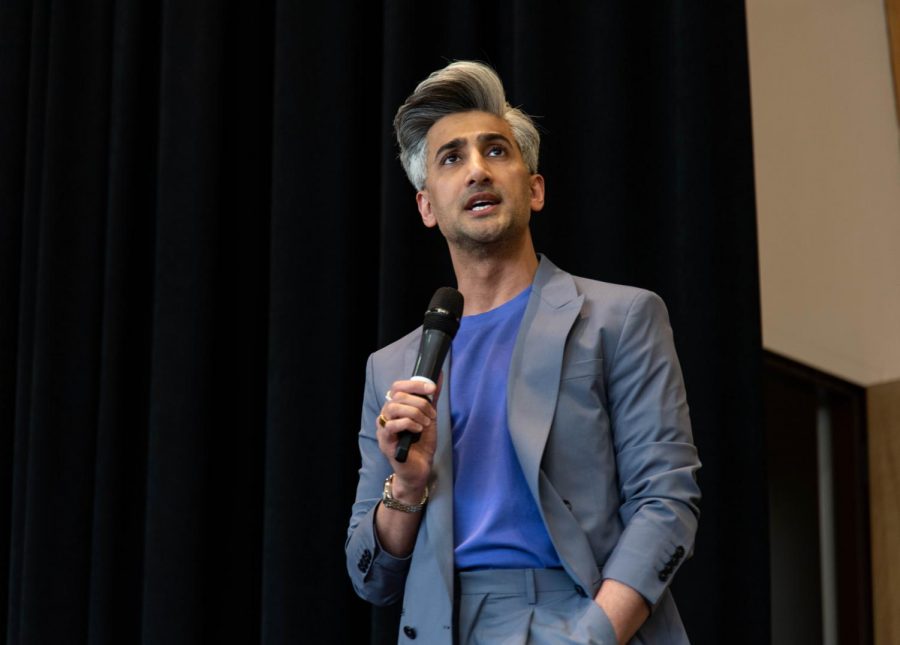 On Feb. 28, 2020, University of Utah students and local residents lined up around the Union in anticipation, waiting to hear keynote speaker Tan France at the annual Conference on Diverse Excellence hosted by the Associated Students of the University of Utah. The theme of the conference was “Hate Has No Home Here.”

Keynote speaker Tan France, known for the Netflix shows “Queer Eye” and “Next In Fashion,” spoke about diversity and inclusivity at the University of Utah. Greeted with massive applause, France entered the A. Ray Olpin Student Union sporting a gray suit and blue sweater with the infamous “french tuck.”

The conference was set up with three workshops that addressed unpacking privilege, confronting unseen biases and building on support systems.

“This conference aims to foster creative and pioneering social justice pedagogies at the University of Utah, and we hope to have this reflected through workshops,” the description of the event read. Workshops included “Dressing Like a Congresswoman,” led by Charlen “Cha” McNeil, the resident director for social justice initiatives at the U.

McNeil talked about how representation matters in positions of power. She spoke about her own experience as a person of color at Columbia University — a predominantly white institution — and her feelings of imposter syndrome.

McNeil said it’s important to empower students and represent them in their community.

Other workshops discussed Islamophobia on a college campus, the value of international students and use of pronouns.

At the conference, France shared the stage with Abdul Osman, associate director of the ASUU diversity board, who moderated the talk.

“Interviewing Tan France felt like I was interviewing someone I’ve known all my life,” Osman said. “He was so nice before, during and after the keynote.”

France spoke to an overcrowded room about this experience growing up as a British Muslim gay man and how he overcame many of the difficulties in his life.

France spoke about what representation meant for him, which made him feel seen and less alone. France mentioned that when he was growing up, he didn’t feel seen because there wasn’t a version of himself on TV.

“I’m hoping that when people watch TV now and when they see people like me on TV, they’re like ‘I can be that b—-.’”

He also talked about personal experiences growing up surrounded by racism and Islamophobia. He recalled getting beat up as a child on the way to school for simply being a person of color.

Additionally, France spoke about bleaching his skin in order to fit in, finding joy in fashion and expressing his true self as he aged.

Brinly Wilson, a senior in communications, said she was invited by her friend and decided to skip work to hear him speak.

“I love what Tan France stands for and I think he is a very powerful figure … I think he can make a significant impact on how we view ourselves in terms of diversity and confidence and loving ourselves,” she said.

Nancy Wang, a freshman film major, said she liked how France focused on education and being kind to people who may be ignorant and don’t understand what they are doing or saying wrong.

France received a standing ovation as he left the stage.