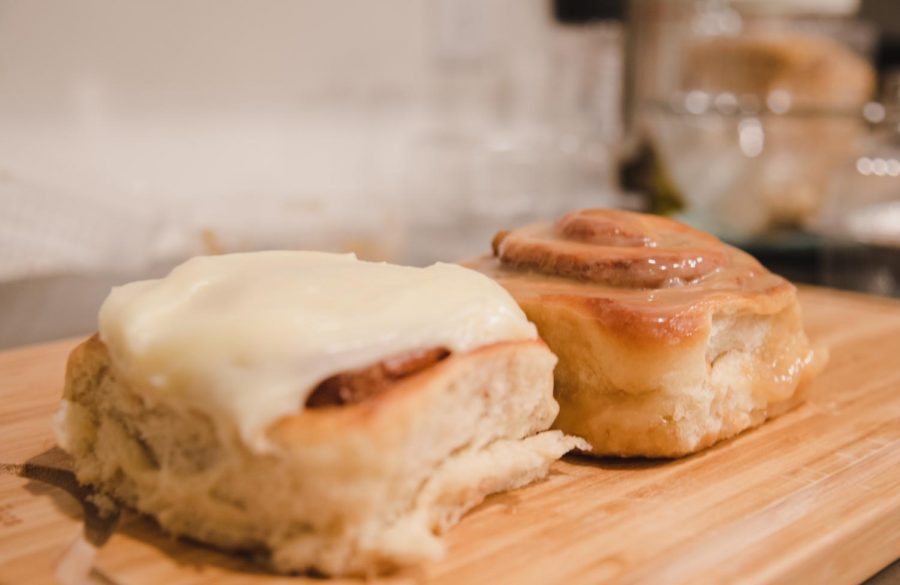 "They reminded me of the cinnamon rolls my mother made on Sunday mornings when I was younger." (Photo by Savannah Vance | Daily Utah Chronicle)

It seems to always be late at night when we tend to get those insatiable cravings for something sweet and all of the restaurants are closed. All hope seems lost. However, if you drive down Highland Drive and pay close attention, in between a gas station and a pub, you’ll find Munchies. The late-night bakery is only open at night and specifically caters to those who want a fresh, hot brownie but have no desire to preheat the oven or grease a pan.

The local bakery based in Millcreek opened up April 20, 2018 and has been serving up their sweet creations ever since.

As you walk into Munchies, you are immediately met with the sweet smell of what they’re concocting in the back. There’s a counter where you can order and comfy seating along the wall where you can sit while waiting on your order. The menu is full of vegan options, which was a pleasant surprise. My friend and I ordered their monthly treat — a vegan chocolate tart topped with raspberries. I also ordered a vegan chocolate chip cookie and two cinnamon rolls — one vegan and one not. They asked if we were alright with waiting a few moments to allow them time since they bake their cookies fresh.

Behind the front counter is the kitchen, so while we sat and waited, we were able to witness the hustle that goes into preparing the sweet and watched them fulfilling orders. We waited no more than five minutes and I had a bag full of my treats with a hot cookie fresh out of the oven on top. The cookie melted in my mouth and was so soft. The chocolate tart was surprisingly rich, and pairing it with the raspberries created the perfect balance of sweet and tart flavors. The cinnamon rolls were the last thing we tried, but they truly turned out to be my personal favorite amongst the rest. The rolls were warm and soft. They reminded me of the cinnamon rolls my mother made on Sunday mornings when I was younger.

I have such a giant sweet tooth and Munchies satisfies my sugar craving every single time I’m there. I would consider this place a local favorite of mine and one that goes underappreciated by the community. It’s reasonably priced and open late, both of which make it the perfect match for college students or anyone interested in late-night sweets. The bakery accommodates those who are up late studying and in need of a break, as well as anyone hanging out at night and wanting cookies. Too often when it’s late at night we are given the choice of fast food chains or late-night diners when we want something sweet. Munchies gives you that homemade taste, so we don’t have to sacrifice quality just because it’s midnight.

Special Recommendations
You cannot go wrong with the cinnamon rolls here. While cinnamon rolls tend to be dry or go over-the-top on frosting, their rolls are light in texture and the frosting is more of a glaze that compliments the dough perfectly. They’re warm and sweet and I always end up regretting that I didn’t order more. The vegan cinnamon roll is comparable to a caramel roll in taste and color and it surpasses any vegan cinnamon roll I’ve had in the past.

Pick up in store or arrange delivery at munchiesslc.com