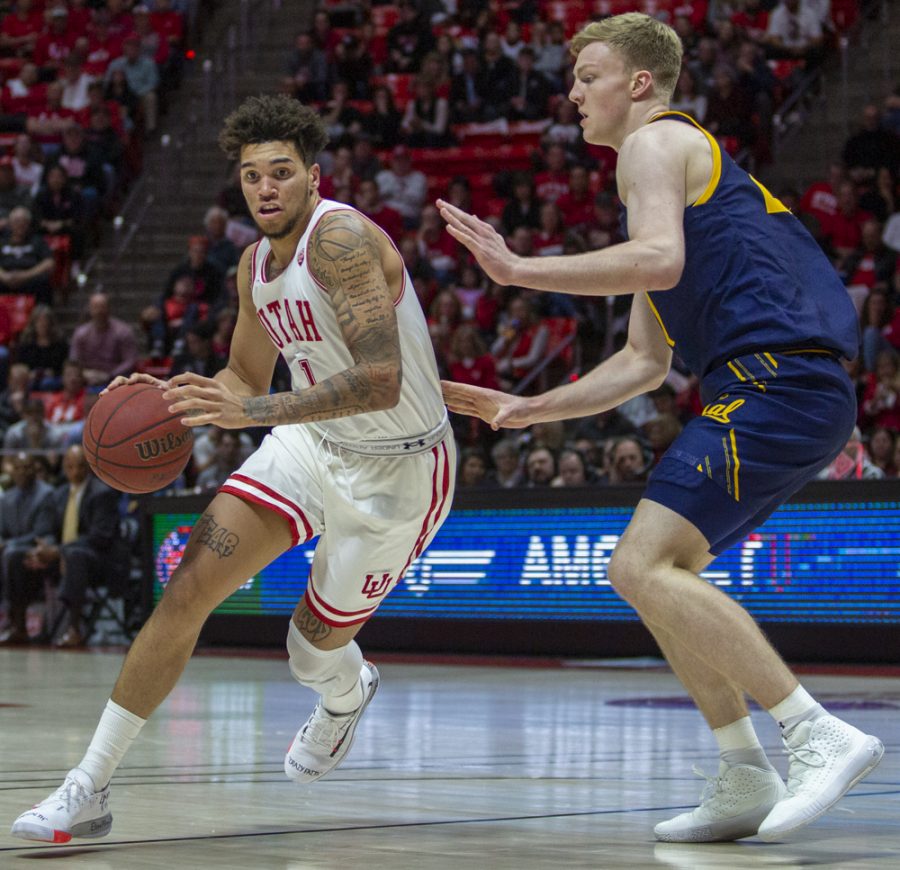 By Casey Overfield and Brayden Ramsay

The University of Utah Runnin’ Utes took their final road trip of the season this past week, taking on the Stanford Cardinal and the University of California Berkeley Golden Bears. Heading into the weekend, the Utes were 15-12 overall with a 1-7 away record.

Utah vs. Stanford
The first half started out as a disaster for the Utes. The team struggled with an early 14-2 deficit before getting their second bucket of the game with 12:50 left to play in the first half. The Cardinal kept piling it on in the first, moving their early lead to 26-9 with just over eight minutes left to play.

Branden Carlson and Both Gach finally were able to pick up Utah’s first consecutive buckets of the game with 5:30 left until halftime. The Utes continued to chip away at the Cardinal’s early lead to take a 12-point deficit into the break.

“We just absolutely got punched in the mouth defensively. We played hard. Offensively, we looked like a junior high team to start the game,” said head coach Larry Krystkowiak of his team’s first-half performance. “Give a lot of credit to Stanford with their intensity. They play like a team that was on the bubble and you know, all those turnovers, 15 points in the first half. I think nine of our first 11 possessions were turnovers.”

Utah’s second-half performance was much better than their first. A Carlson slam dunk would ignite the Utes to make a major push in the final 20 minutes of play. The Utes would come within six points on multiple occasions before a Stanford 7-0 run would push the Runnin’ Utes to a breaking point.

Folding was not an option. Utah’s youthful determination would be apparent as defensive stands and points in transition would help the Utes fight back into contention. Carlson would accumulate a career-high eight blocks on the night, forcing the Cardinal to settle for more outside shots.

The Runnin’ Utes closed Stanford’s lead down to three, but couldn’t come any closer as the Cardinal would take the victory 70-62.

Timmy Allen’s 17 points led the Runnin’ Utes in a game where Gach was able to reach double digits (15) for the first time since Jan. 4.

Utah vs. California
On Saturday, the Utes headed across the bay to Berkeley, California, where they faced off with the Golden Bears.  The two teams battled it out for the final road game of the regular season.

The Golden Bears took the early lead, and they kept the upper hand for the first part of the first half, until after the first timeout when Utah broke it open with an 8-0 run.  Once the game hit halftime, the score read Utah 28, Cal 24.

In the second half, Utah’s offense stepped it up, and three Utah players — Allen, Gach and Alfonso Plummer — each hit double-digit points for the team.

Plummer hit a key 3-pointer in the final 10 seconds of the game, which was followed by two free throws from Gach to knot the score at 69-69, which caused the game to go into overtime.

The overtime quarter went back and forth until Cal scored five unanswered points and never lost the lead.  In addition to their points, the Golden Bears capitalized on a number of turnovers and mistakes from the Utes to eventually end the game with a score of 86-79.

Although the loss was hard, there were a number of positives that came out of Saturday’s game, including a career-high 23 points by Plummer. Allen also contributed 26 points, and Gach was up there with 19. This game was the first since the matchup with BYU in Dec. where two Utah players recorded 20-plus points in a single game.

The Utes held strong on defense, never allowing the Golden Bears to take a double-digit lead, and both Allen and Mikael Jantunen grabbed eight rebounds.

Next Week’s Matchup
The Runnin’ Utes will be back in action next week for Senior Night against the Colorado Buffaloes. The game will be played on Saturday, March 7 and will tip off at 12:30 p.m. Utah will honor it’s only senior, Marc Reininger, after the game.

Utah’s game against Colorado will be televised on Pac-12 Networks and radio broadcast on ESPN 700.