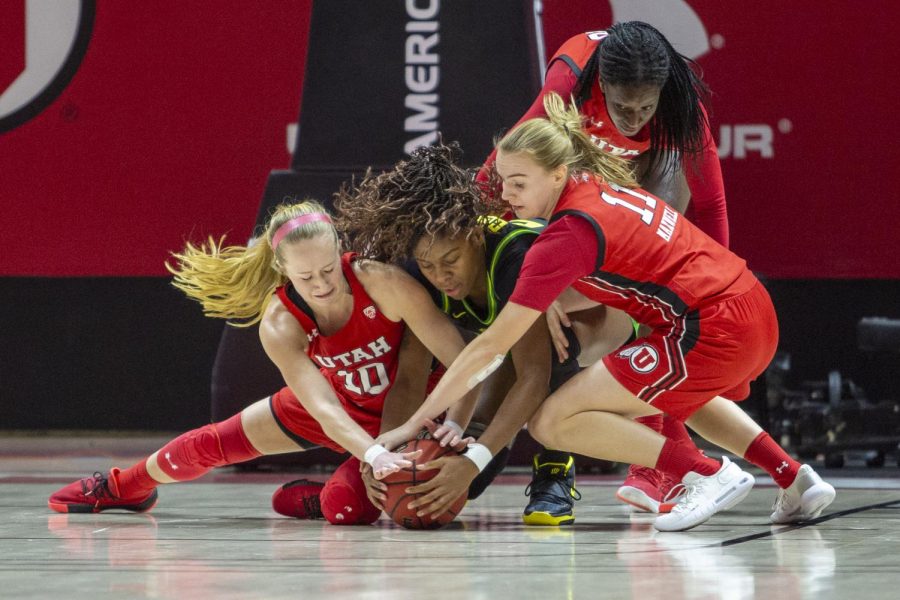 University of Utah players dive for a lose ball during an NCAA Basketball game vs. the University of Oregon at the Jon M. Huntsman Center in Salt Lake City, Utah on Thursday, Jan. 30, 2020. (Photo by Jalen Pace | The Daily Utah Chronicle)

The University of Utah women’s basketball team (13-16, 6-12 Pac-12) dropped their final games of the regular season this weekend as they turned their sights to the Pac-12 tournament.

Utah dropped a close one on Friday against USC (16-13, 8-10 Pac-12) 66-69. The Utes started slowly out of the gate, which has been a trend for them lately. They trailed by eight at the end of the first quarter, and the score was mostly in that range for the rest of the game. They kept it close and they cut the lead to only three with under four minutes remaining. They couldn’t quite get there in the end, and dropped a close one on the road. The loss gives USC the higher seed over the Utes in the Pac-12 tournament. Freshman Brynna Maxwell had 18 points on 5-9 shooting. Sophomore Maurane Corbin had 10 on 5-5 shooting off the bench.

Then, the Utes had a tough task on Sunday going up against No. 9 UCLA (25-4, 14-4 Pac-12). Utah was overmatched from the start, falling behind early and never recovering. UCLA is a great team who played a complete game. Senior Kiana Moore led the Utes with 11 points. Junior Julie Brosseau also had 11. None of the Utah starters scored in double figures.

The Utes have now lost five of their last six games and are struggling going into the postseason. They play in a very tough conference with six of the 12 teams ranked in the Top 25 nationally. They have a tough task ahead of them in the Pac-12 tournament, and they will need a strong performance there to strengthen their NCAA tournament resume.

They will at least need a win against Washington and a strong performance against Oregon for the committee to feel inclined to include them. They have some good wins to their name, but with a poor conference record, even against tough competition, it will be tough to get in without a strong showing in the conference tournament. They have a big weekend ahead if they want to try and get into March Madness.

The Pac-12 tournament will take place on March 5-8 in Las Vegas.