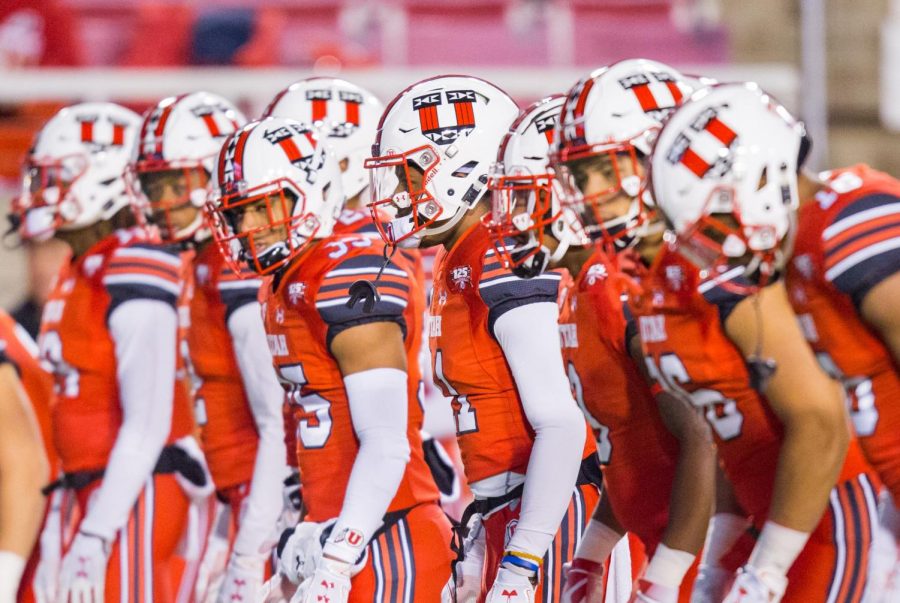 The University of Utah Football team lined up during warmups prior to kickoff in an NCAA Football game vs. the University of Arizona at Rice-Eccles Stadium in Salt Lake City, UT on Friday October 12, 2018.(Photo by Curtis Lin | Daily Utah Chronicle)

The Ute name is here to stay. The University of Utah announced on Tuesday, March 3 that athletic teams, as well as the school, will still don the name “Utes” for the next five years.

The school has been using the Ute name since 1972 with the tribe’s support.

The use of the Ute tribe name remains controversial, however. Some Ute tribes — including the Ute Mountain Ute Indian Tribe and the Southern Ute Indian Tribe — are not involved in signing the contract. Charles Sepulveda, an indigenous professor at the U, expressed discomfort with the mascot in a recent interview. In September, student Social Justice Advocates hosted an event encouraging students to cheer “Go Utah” instead of “Go Utes.”

While the athletic department already aims to educate fans about how to use the Ute name in an appropriate manner, the new deal will increase educational efforts about the tribe that the school represents.

Starting next year, all first year students will be required to be taught things about the Ute tribe at their mandatory new student orientation.

This adds to the list of things the U and the tribe have agreed on in previous contacts, which includes the U supporting members of the Ute tribe and other Native Americans who attend the U, providing financial payment to the tribe and supporting K-12 students on the reservation in Fort Duchesne.

The deal also renewed the contract for the basketball, football and gymnastics teams to host their annual Ute Proud games that are popular with many fans.

At the Ute Proud football game, the halftime entertainment is provided by the tribe.

“We are honored to continue using the Ute name and we acknowledge the special responsibility our athletes and fans bear to the Ute Indian Tribe,” said athletic director Mark Harlan in a statement. “Ute history is Utah history. We look forward to carrying the name forward with understanding and respect toward our state’s namesake people.”

“The Ute Indian Tribe is pleased to continue its partnership with the University of Utah,” said Luke Duncan, chairman of the Ute Indian Tribal Business Committee, in a statement. “This agreement renews our shared commitment to building genuine respect and understanding of our tribe’s history, as well as our goal to support our youth in pursuing their education.”

This month’s signing comes after the last deal was signed in April 2014.