No. 4 Utah Gymnastics Finishes Pac-12 Competition with Victory Over Stanford 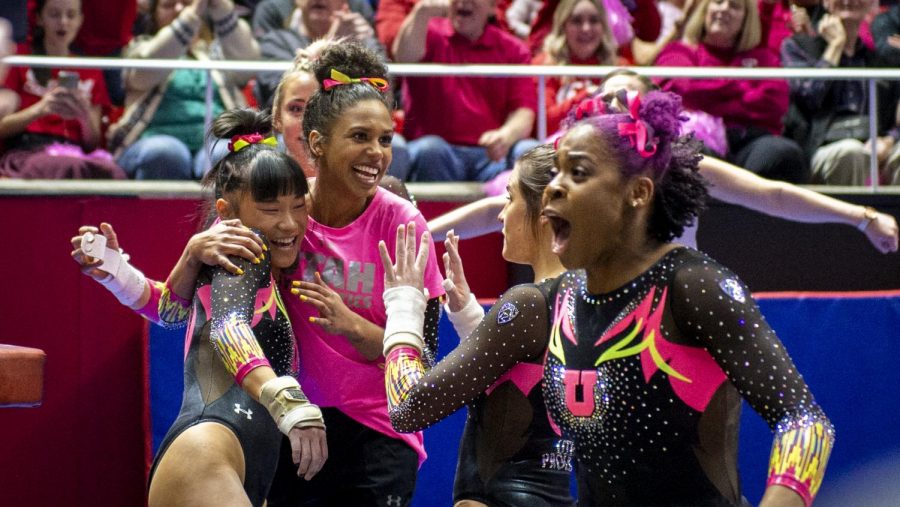 University of Utah women's gymnastics senior Kim Tessen reacts to her perfect 10 following her performance on the vault in a dual meet vs. The Stanford Cardinals at the Jon M. Huntsman Center in Salt Lake City, Utah on Friday, March 6, 2020. (Photo by Kiffer Creveling | The Daily Utah Chronicle)

The No. 4 University of Utah Red Rocks gymnastics team officially finished their in-conference schedule undefeated after they took down Stanford 197.750-196.725. There were lots of highlights for the team, including senior Kim Tessen finally earning the coveted perfect score of 10 on the vault.

This was the second 10 given to this team this season, and the first one on the vault since MaKenna Merrell-Giles did the same thing in 2018 versus Washington.

“This year I have been able to work hard in the gym and it has paid off,” Tessen said.

Head coach Tom Farden knew that Tessen was bound to earn a 10 at some point this season and that she has started to solidify herself as one of the best gymnasts in the land.

“I knew she was going to let one loose,” Farden said. “She had been blasting in training, so it didn’t surprise me when she set that up. As soon as she hit that table, she knew it was good and I knew it was good.”

Tessen’s 10 was not the only highlight of Utah’s season-high scoring vault lineup. Cammy Hall tied her career high score of 9.950. One judge even awarded Hall a 10 for her vault.

Tessen won the event title for the vault, and Hall took second place on the event.

While the vault was the best of the meet for the team, during their second rotation, there were lots of tenths left on the mat.

“Bars had good handstands and some good work over there, but again we were just misfiring on some of those dismounts,” Farden said.

Cristal Isa tied with Stanford gymnast Grace Waguespack for the event title on the bars. Both scored 9.90s on their routines.

Utah’s beam lineup was consistent as ever, with the team posting a 49.550. Maile O’Keefe won the event title with a 9.975. Just like Hall, one judge gave her a 10 for her routine. Both Isa and Abby Paulson posted 9.925s on their routines.

The Utah floor lineup was shaken up after Sydney Soloski appeared to injure herself on the first vault of the meet. While Farden says it looks like a quad injury, the team won’t know more until later. Tessen was able to slip back into the floor lineup and post one of two 9.900 scores for the Red Rocks.

While the scores look like it was a dominating win for the Red Rocks, the team was back home after facing a hard road stretch and not being home for almost the entire month of February.

“They have been locked in emotionally for so long,” Farden said. “They just beat the top half of the Pac-12 at their place meet after meet after meet, and they were a little flat tonight.”

But being backed by 15,000 person crowds does make things better when the meet is clunky, like Farden said.

“We love our fans,” said Alexia Burch. “And our equipment. And everything about Utah.”

The score Utah posted tonight will come in handy when the rankings are released on Monday.

“We are obviously all our own worst critics and we are not going to beat ourselves up too much,” Tessen said. “We had a lot of good highlights and that will really help our NQS [national qualifying score]. But, we are still working. We still need to hone in on some details.”