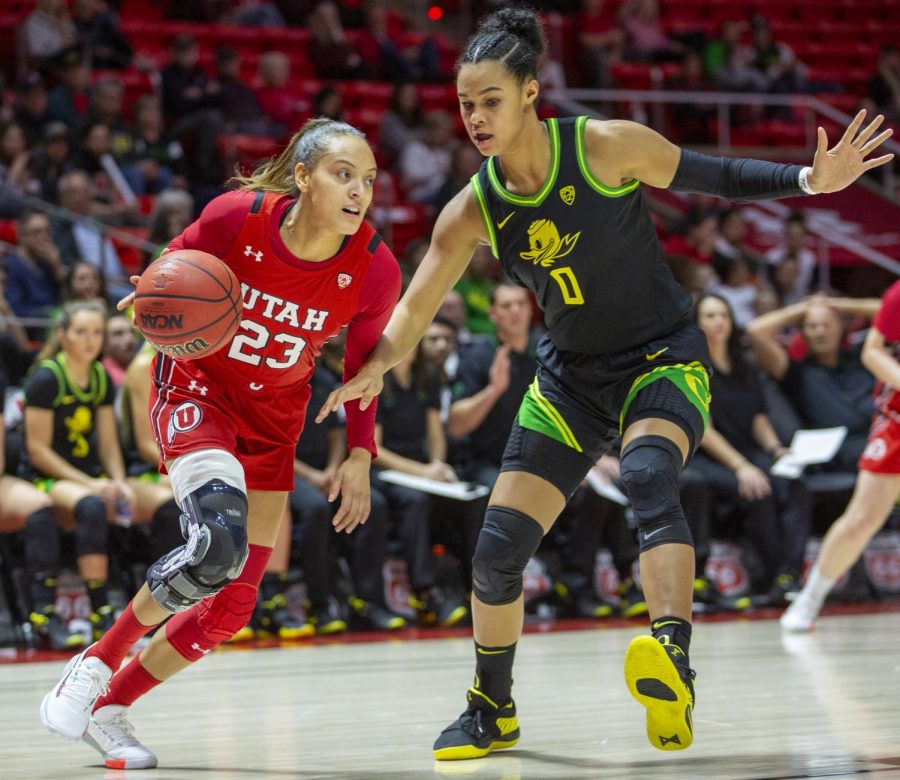 University of Utah senior wing Daneesha Provo (23) drives to the basket during an NCAA Basketball game vs. the University of Oregon at the Jon M. Huntsman Center in Salt Lake City on Thursday, Jan. 30, 2020. (Photo by Jalen Pace | The Daily Utah Chronicle)

The Utes won their first round matchup against Washington (13-17, 5-13 Pac-12) on Thursday before going into their match with the Ducks. Starting as the Pac-12’s No. 8 seed, Utah finished tied for fifth in the conference.

Utah played a great game on Thursday against the Huskies, winning 73-62. Utah has had troubles starting slowly or inconsistently throughout the season, but that was not the case here. The Utes finished the first quarter with a 21-17 lead. Utah led by four at the end of the third and took a 10-point lead with just six minutes to play behind a strong start to the fourth. It was a back-and-forth battle most of the night, but the fourth quarter run by the Utes put the game out of reach from Washington. They cruised to a big win in the first round of the Pac-12 Tournament.

The freshman duo of Brynna Maxwell and Lola Pendande powered the Utes, each scoring 17 points to lead the team. Maxwell went 5-5 from 3-point range.

After that, they had to get ready for conference powerhouse Oregon on Friday. Oregon, one of the best teams in the nation, is favored to win the conference and go far in the NCAA Tournament when the field is announced. Utah was hoping to go in, play their style and see what they could do against a great opponent.

They brought their intensity to the game, taking an early lead and keeping it at the end of the first quarter 19-16. Then the Ducks found their footing and rallied at the start of the second quarter. They never looked back, sailing through a 20-point blowout over the Utes. Pendande again had 17 and Maxwell had 12.

This game is something to build off of for the Utes. They played well in the conference tournament, getting a win before running into one of the best teams in the country. Their freshmen duo of Maxwell and Pendande led the team in scoring in both games, which is a great thing for their future. If those two can keep developing and getting better, Utah has a great chance to put together some competitive upcoming seasons.

In the meantime, Utah now awaits the announcement of the field of 64 for the NCAA Tournament. Because they are not a conference champion, they will have to get one of the 32 at-large bids left over. A solid season from Utah with many competitive games will put them on the bubble, but with a poor conference record it may be tricky to get in, regardless of how tough their competition was. If they are not selected, a WNIT bid is a likely possibility. Both brackets will be announced on Monday, March 16. Utah will then find out where they will be playing next to close out their season, hopefully with a deep tournament run.