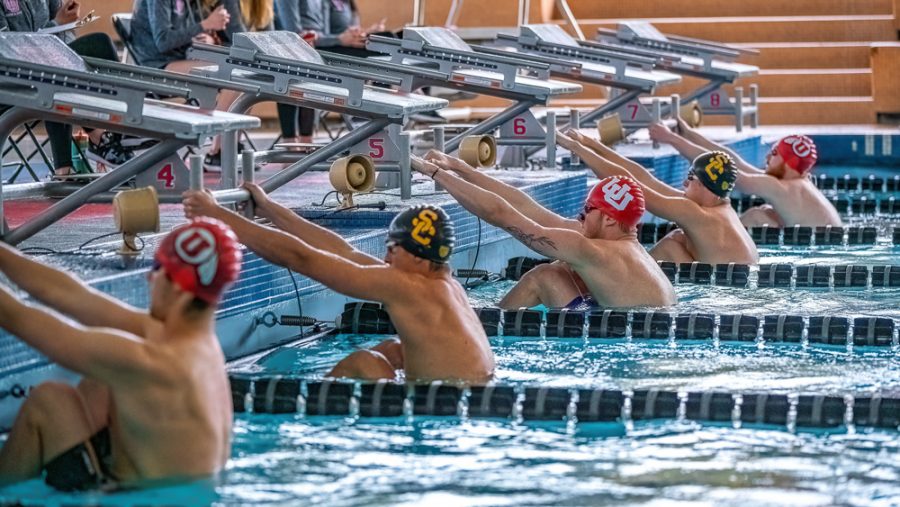 University of Utah Utes Men’s Swimming and Diving Team performs during a dual meet vs. University of Southern California at the Ute Natatoriam in Salt Lake City on Feb. 23, 2020. (Photo by Abu Asib | The Daily Utah Chronicle)

The Utah men’s swim team had a strong showing at Pac-12 Championships despite difficult competition, finishing fifth after four days of competition in Federal Way, Washington.

Day 1
To begin the Pac-12 Men’s swimming championships, the University of Utah set a new school record in the 400 medley relay.

In the final event of the evening, Utah’s team of Andrew Britton, Cooper DeRyk, Liam O’Haimhirgin and David Fridlander finished runners-up as they set a new record of 3:07.49. This was almost two-tenths of a second faster than the previous record set at the 2018 Pac-12 Championships.

In the other relay of the night, Utah swimmers Robert King, Cole Giandinoto, Rahiti De Vos and Finn O’Haimhirgin competed in the 800 free, where they placed sixth overall.

Day 3
As competition continued into the third day, sophomore Britton set a new school record in the 100 breast. Britton beat his own record from earlier in the season with a time of 52.95 as he placed fifth. He was followed by fellow Utah swimmer Jaek Horner, who finished with a time of 53.14.

Ben Waterman was sensational in the 100 fly prelims as he set the second-fastest time in Utah swim history with a time of 46.23. However, he struggled in the finals and ended up finishing eighth overall.

Day 4
The final night of competition was highlighted by De Vos, who took seventh in the 1650 free. He finished with a time of 14:57.07, the second-fastest time in Utah history.

Utah also saw a strong performance by Liam O’Haimhirgin who qualified for the championship final of the 100 free, where he placed eighth.