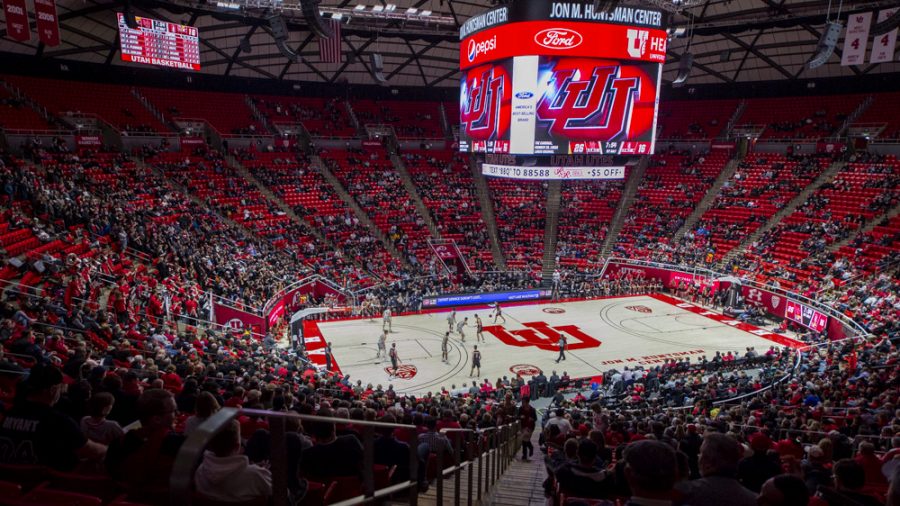 The University of Utah plays against Stanford during an NCAA Basketball game at the Jon M. Huntsman Center in Salt Lake City, Utah on Thursday, Feb. 6, 2020. (Photo by Kiffer Creveling | The Daily Utah Chronicle)

While the season might not have ended the way all the University of Utah winter sports would have hoped, members of the teams are still being recognized by both the conference and national outlets for their achievements this year.

After finishing the season with a 14-17 record, the future looks bright for the Utah women’s basketball team.

Freshman Lola Pendande also received conference honors. She was named honorable mention on the All-Freshman team from the Pac-12.

After a heartbreaking loss in the Pac-12 tournament, the men’s basketball team finished the season with a 16-15 record.

Timmy Allen was the lone member of the team to earn postseason accolades. Allen was named to the United States Basketball Writers Association All-District Team for District VIII. He is the first Runnin’ Ute to be awarded this honor since Kyle Kuzma earned the same title in 2017.

That wasn’t the lone award for Allen, he was also named to the Second-Team All-Pac-12. He is the first Utah sophomore since Jakob Poeltl to earn this conference award.

Gymnastics
The No. 4 Red Rocks gymnastics team was in the middle of a historic season when it was cut short. But all was not lost — the team was awarded the inaugural regular-season Pac-12 Championship.

Senior Kim Tessen was named an All-American on the vault and the bars. In her last competition at the Jon M. Huntsman Center, Tessen scored a 10 on the vault. Her season-high on the bars was a 9.975. She scored a 9.90 on at least one event each meet during the season.

Cristal Isa earned honors on the bars and the beam. Isa scored above a 9.875 on seven out of nine bar routines this season. On the beam, she scored 9.95 three times in a row.

Freshmen Abby Paulson and Maile O’Keefe were also both named All-Americans on the beam. Paulson took over the anchor spot and became one of the best in the country in the event. When facing UCLA and the meet came down to the final performance, Paulson came up clutch scoring a 10 for the team.

O’Keefe also was able to put up the big scores for the Red Rocks, posting two scores of 9.975 on the event. She also had six straight scores above 9.90.

Rounding out the All-American selections was Sydney Soloski who made the second team on the floor. Soloski scored 9.90 or above on six out of eight floor routines. Of those 9.90s, three of them were 9.950s.

At the conference level, Tessen was named the Specialist of the Year. Head coach Tom Farden was named the conference’s coach of the year. He led the team to their first undefeated season since 1993 and the second in school history. This is the first time a Red Rocks coach has won the honor since 2015.

Those were not the only awards the Red Rocks walked away with, eight gymnasts were named to the All-Pac-12 Teams.

Earning honorable mention was Adrienne Randall for beam and Missy Reinstadtler for bars.