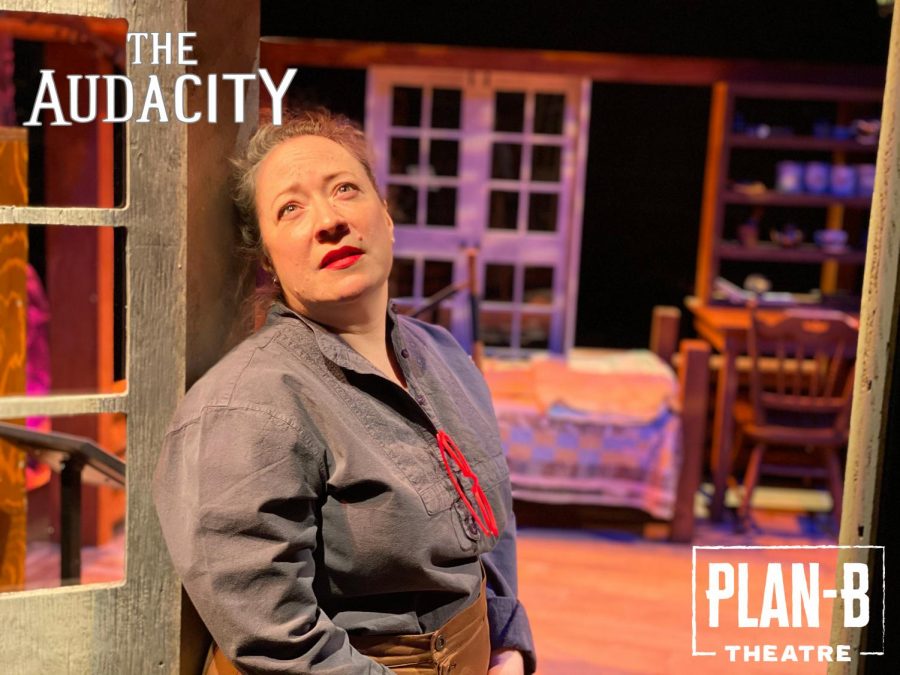 Plan-B Theatre has gone where very few theaters can during Salt Lake City’s recent stay-at-home directive — their show did indeed go on. With only six rehearsals with six feet of distance at all times, not to mention two building closures, they are still presenting “The Audacity” by playwright Jenifer Nii. Under the direction of Jerry Rapier, Artistic Director at Plan-B Theatre, the one-woman show was filmed while following all COVID-19 safety measures and is available to be streamed by the public from April 1 to April 5.

“The Audacity” centers around the lives of three Utah women, Elizabeth Bassett and her daughters, Josie and Ann, who homesteaded and lived in what matriarch Elizabeth named “Brown’s Park” through the turn of the 20th century. These women are brought to life by actor April Fossen, who weaves together stories of mothers and daughters in a seamless tale.

Fossen enters the stage as Chris, a modern-day lawyer, and mother seeking an escape from her overwhelming world who finds herself at Josie Bassett’s old home, now a historical landmark outside Dinosaur National Monument. Her story is unraveled in between the accounts of the Bassett women and those who knew them, following Elizabeth, a Southern belle who brought her husband to Utah for fresh air and taught her two daughters to shoot — Ann, called “Queen Ann of the Rustlers” for her fight in the cattle business, and Josie, the adventurous and strong-willed widow and four-time divorcee who had the audacity to live a life unexpected.

Within the confines of a small cabin setting, Fossen embodies these individual women with small yet significant accents — a pair of working gloves, a flowery scarf, an old walking stick and a pair of red-framed glasses. Each serves as a marker of entering a new space and time, but are simply tools in Fossen’s complex and captivating characterization of each woman. She did truly spectacular work — every moment was honest and rich, full to the brim with grace and might.

In terms of technical aspects, less was in fact so much more here. Transitional sounds helped an audience find footing in the jumping vignettes of modern-day and old times. Though subtle, I adored the use of lighting in a single room. The show had much more color than I would have thought possible, and the changes followed characters and tone shifts effortlessly.

However, the crowning jewel of the show is its unparalleled wordsmith. Even viewing the show from the relaxed setting of my own, Nii’s words are earth-shaking. Her most powerful construction was near the end of the show, where Chris finds a picture of Josie with her two boys and begins to relay her own experience of raising a daughter. She almost pities the irony in Josie’s story, saying, “The pioneer of feminism, and you had boys.” Unsatisfied with such a fate, immediately Fossen steps into Josie’s shoes, teaching her young son to shoot a gun, and says, “You are the best boy, you know that? Now, I want you to remember this. If you want to be the best man, you can stand to learn a lot from a woman.”

“The Audacity” is a living, breathing dialogue on the nature of motherhood, feminism and persistence in a world that seeks to undermine a community of powerful individuals full of independence, faith and ferocity. Nii, Fossen and Rapier designed a show of strength amidst the storm, with every piece intentional and powerful.

Though I was skeptical about streaming a live production, this format gave me so much. Maybe it’s due to the nature of self-isolation, but I had chills running up and down my spine when the character of Chris first falls away into the history of pioneer women and Fossen said, “People say, ‘How do you keep your sanity in all this quiet?’ But listen. Set aside all your thinking about all the hubbub that’s gone on during the day and listen. Do you hear ‘em? The voices of the earth. Telling their tales about what was and is and what’s becoming. Do you hear ‘em? Now, let the other thoughts back in, the ones you brought with you. Ask me again about sanity.” It is this clever and compelling up to its last moments when Fossen finally leaves the little cabin behind.

This article has been updated to correctly name the theatre company and the playwright. It is Plan-B Theatre and Jenifer Nii.