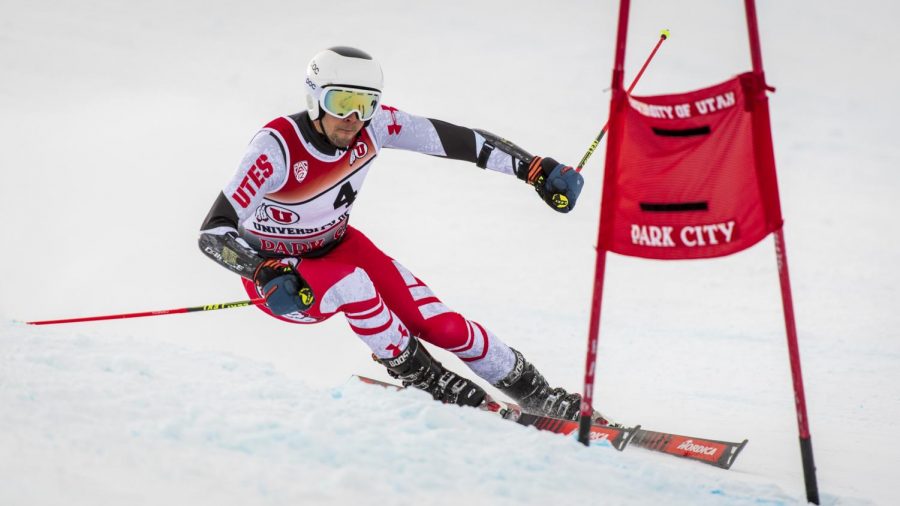 Addison Dvoracek from the University of Utah ski team competes in the Utah Invitational at Park City Mountain Resort in Park City on Saturday, Feb. 22, 2020. (Photo by Kiffer Creveling | The Daily Utah Chronicle)

Addison Dvoracek is a senior member of the University of Utah ski team, who has proved to have an intriguing route to finding his success on the slopes. From spending time on the national circuit to only receiving one offer to compete at the collegiate level, he has overcome injuries and other setbacks and still has his sights set for larger career goals in the world of ski racing.

Dvoracek is originally from Truckee, California which is located near beautiful Lake Tahoe. He was first on skis at the age of two, and his parents got him into racing around the age of seven. Since then, he has been racing non-stop.

Utah was Dvoracek’s first choice for school, however, when he was on the national team competing for two years before college, he was injured and had his hardest season to date. This injury limited his options as to where he could attend college to ski, so much so that the only offer that he received was from Montana State University. He competed there and began to bounce back into his former self as he won multiple races, and then he was looking for a program that could offer him the chance to compete for a title. His choice came down to the U and the University of Colorado at Boulder, and he chose to become a Ute.

Head Alpine coach JJ Johnson was Dvoracek’s coach on the national team for the two years before his injury plagued season, which allowed for a relationship to form that was easy to rekindle when they both were reunited at the U.

“He had his pick of schools after his years at Montana State and he wanted a little change, a team that could compete for the title, and this was a little closer to Reno for him. Since he has been here it has been awesome to work with him again,” Johnson said.

He likes to stay rounded in all of his events but admitted that he has found more success in one of the specific race styles called the Giant Slalom.

“Giant Slalom has been better for me definitely over the last few years, but although we only do slalom and giant slalom in college, Super G and Downhill have been good as well,” Dvoracek said.

For the average reader who isn’t on par with the racing lingo, the difference between the event types is the distance between the gates in which the skiers make their way through. Downhill gates are the furthest apart, which means the skier’s main focus is on the speed at which they descend the course, while slalom has the tightest gates, which makes the skier focus more on the technical aspect to couple sharp, crisp turns to allow them to be efficient as well as fast.

For Dvoracek, he loves the speed aspect, as well as the forces that come with the required sharp turns. This plays hand in hand with why he enjoys Giant Slalom in his college races more than Slalom, due to the fact that the gates are further apart in the Giant Slalom, allowing for speed to be more of a factor, playing directly into his strengths as a racer.

The ski team here at the University of Utah has enjoyed tremendous success over the years, acquiring the top talents around the world and being a staple in the national championship picture year in and year out. These accolades are impressive, but there is more work that goes in behind the scenes. In addition to being dedicated to their craft, these athletes still have to balance being full-time college students, which is a feat in itself.

“The hardest part of being a student-athlete is the balance of doing school and skiing. We spend so much of our time training and with our competition season that it is definitely a tough balance. Being able to set aside time to work on school especially when you’re on the road, yeah I think that is the toughest,” Dvoracek said.

When asked to offer an attribute that set Dvoracek apart from others on the team, Johnson was very quick to say it was his personality.

“He can focus at any time but he has a really good balance and he can brush anything off. Sometimes you need to tell him when to turn it on, but he does it right away. He keeps everyone loose and relaxed and is a pleasure to work with and is a glue to the team,” Johnson offered.