On the Frontlines of a Pandemic: First Stop Testing 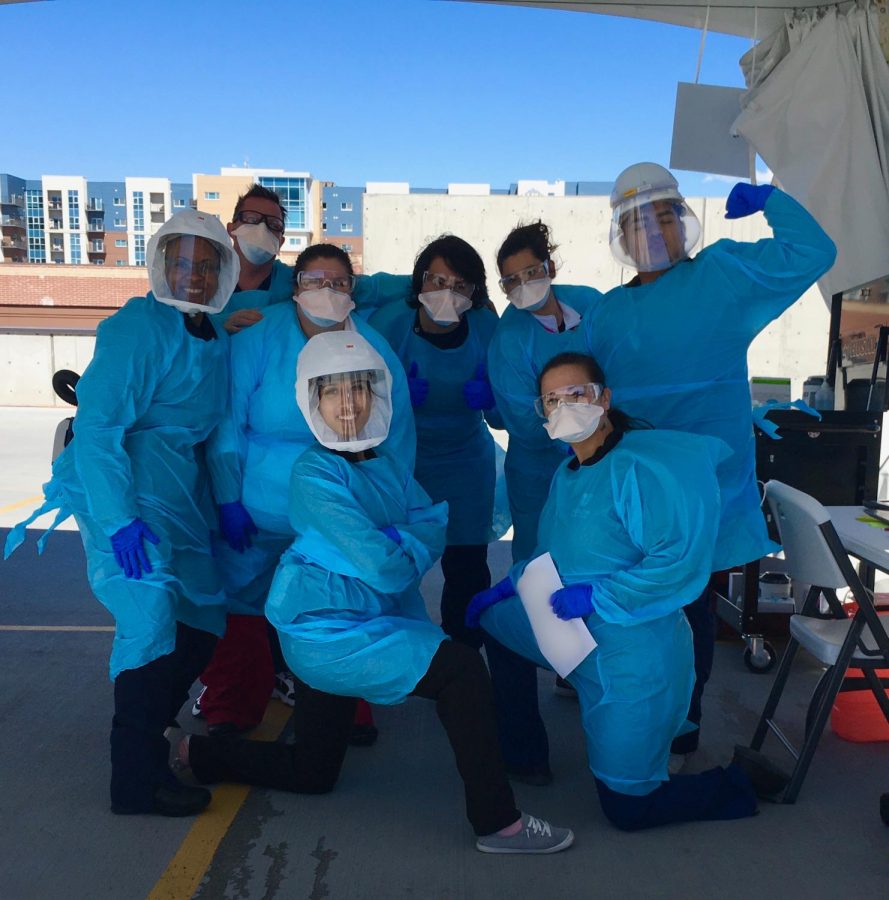 The jobs of U students working in health care have changed drastically during the COVID-19 pandemic. (Courtesy Alexis Olivas)

On a regular day, medical assistant Alexis Olivas would be checking in patients in the primary care floor, taking their vitals, doing their intakes and reporting back to her assigned physician.

Now, she’s in the Sugar House Health Center parking lot, where white tents are stationed for testing. Olivas’ new job, like many other medical assistants in the field, is testing patients for the disease caused by possible novel coronavirus, COVID-19.

In a matter of weeks, the University of Utah Health Care has transformed its parking lots to drive-in centers where people in the community can come and get tested if they’ve shown symptoms of the virus. U Health currently has five drive-up testing centers.

Lines of cars wrap around the Sugar House Health Center from the front into the main parking lot, where Olivas huddles with her team, all dressed head-to-toe in personal protective equipment, ready to go out into the field. Nine times out of ten, Olivas is one of the medical assistants swabbing patients.

Olivas is a third-year student at the U studying sociology. She said she knew she’d always be the first one in the front lines, but she didn’t think it would happen so soon.

“It’s just so surreal, how different it is now. And to see everyone come together and adapt to so many changes — it’s pretty amazing,” Olivas said in a phone interview.

As of April 18, according to the Utah Department of Health, there are currently 2,931 cases in the state of Utah and 25 deaths. There are also 59,944 people who have been tested. Olivas said on the busiest day, she has seen about 250 patients in 24 hours.

The U health website says that patients with any one of the symptoms for coronavirus can be tested. As the testing capacity has increased, the standards for receiving a test have changed, and now state officials encourage those with symptoms who were denied a test to try again.

However, there has been debate about whether patients should be tested if they are presymptomatic. According to a study by CDC conducted on the cruise ship Diamond Princess, more than 46% of passengers and crew members who had the virus were asymptomatic.

According to the CDC, symptoms may appear two to 14 days after exposure based on incubation periods. Individuals who may not show symptoms have been carriers and silently spread the virus. Olivas said that deciding who gets tested is complicated.

“It’s so confusing because it’s changing so often, the protocol. And when to test patients, they have to pass certain criteria,” Olivas said.

“Because so many patients will be asymptomatic, not showing any symptoms and they’ll test positive. And then other patients will come in [with] high fevers and stuff and then they’ll come back negative. I think that’s why it’s so confusing right now,” Olivas said.

She said there have been concerns expressed as to why not everyone, including health care workers, are being tested frequently for the virus.

“I honestly don’t know the reason for that. I think they’re just trying, in my opinion, not to overwhelm ARUP — the laboratory staff doing unnecessary tests,” Olivas said.

The test, according to Olivas, is invasive. The test requires the health care provider to reach back inside the nasopharynx — the upper part of the throat behind the nose — and swab for 20 seconds. She said it’s common for patients to have a nosebleed afterward.

In these last weeks, Olivas has roomed with Natalie Wilson, another medical assistant who also works at the Sugar House Health Center to limit the exposure to her family.

Wilson, a third-year pre-med student studying health society and policy, lives five minutes away from the clinic. Her schedule, similar to Olivas, has changed drastically in light of the pandemic. Wilson now spends most of her time at the clinic.

Wilson said her first time on site was surreal.

“My first day, I just remember being so paranoid that personal protective equipment wasn’t on correctly, even though we had to go through training and complete modules and two online classes for it all,” Wilson said in a phone interview.

As the days continued, she said she began to feel more relaxed and established a routine she’s gotten used to.

When the Daily Utah Chronicle asked Wilson about personal protective equipment shortages in other parts of the nation, such as New York, she said she’s aware of the shortages but doesn’t currently believe her clinic has one.

“We are preserving PPE and we are making sure that there’s no contamination risk,” Wilson said. “The hardest thing for me is that I could be a potential risk to everyone, to the people around me. We’re healthcare workers, we know the risks. But we know we want to expose as little people as possible. ”

In New York City, at the epicenter of the pandemic, health care workers are facing a shortage of PPE. One nurse, Imaris Vera, went on Instagram to share her story about quitting her job because she didn’t feel safe working at her hospital. (The video has since been deleted.)

“America is not prepared and nurses are not being protected,” Vera said in the Instagram video.

U Health released a document which is under constant review about approved PPE Alternative and Conservation Measures.

The document stated, “most staff will be issued one procedural mask per day. Some clinical areas (i.e. ORs and COVID accepting units) will be allowed additional masks.”

According to a video briefing on March 27 for U Health employees, U Health Surge projections are expected to peak in May.

As for now, health care workers like Wilson and Olivas continue to work on the front lines, hoping people will stay at home and flatten the curve.

“Just be patient and stay home. That’s the biggest thing everyone has to do right now is just stay home,” Olivas said.