Pop-Cultured: Tattoos are an avenue for self-healing 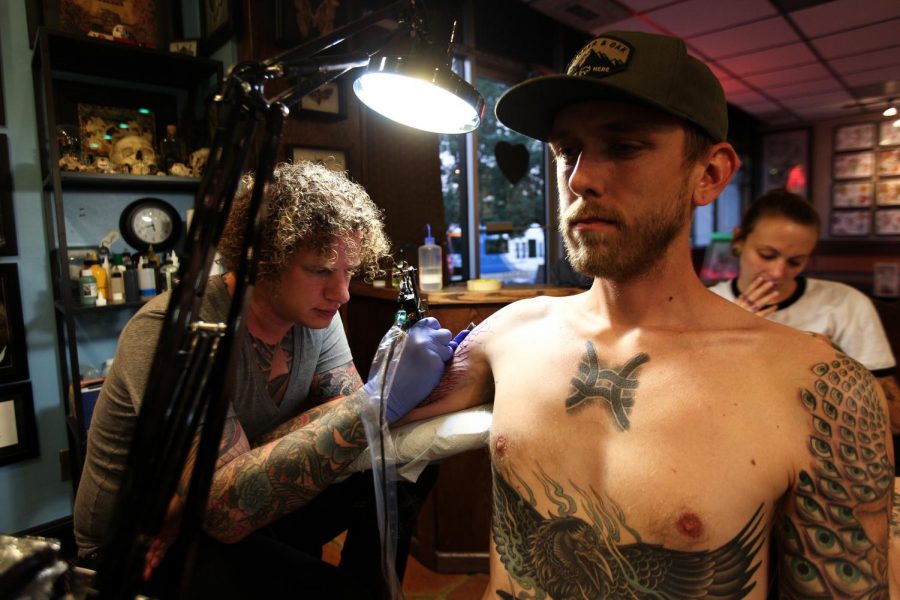 Before I discuss my perspective on tattoos as a former member of the Church of Jesus Christ of Latter-day Saints, I feel it’s crucial to acknowledge why we even have these art forms to begin with. Although the earliest evidence of body art is on a man named Ötzi who died around 3250 BCE in the Italian Alps, the practice has been most widely practiced over the past few millennia in East Asia and Polynesia, where the word “tatau” originates.

In New Zealand, for example, tattoo evolved as nearly ubiquitous language-specific patterns identify genealogy and social status while endurance of the pain grants tribe membership and spiritual protection. When sailors took a liking to tattoo and explorers like James Cook brought it to Europe, the public perceived it as a perversion of one’s God-given body. Through the eighteenth and nineteenth centuries, in attempts to assimilate into Western Christian culture and be respected by rising imperialist powers, cultures like Tonga and Japan saw rapid declines in tattoos and even had them outlawed.

I’m grateful for dedicated indigenous artists who have kept the art of tattoo alive so that people like myself can express ourselves with it today. Obviously, the tattoo doesn’t function as a sacred group ritual in industrialized Western cultures like the U.S., but it still communicates a lot of valuable social information here. After all, artistic self-expression is a human universal. We love using dialect and hairstyles and water bottle stickers to brand ourselves, because it’s fun, but also because we crave easy categorization tactics that help organize and process the overwhelming amount of social data in front of us. Enter the tattoo. Different images say very unique things, but having a tattoo in and of itself signals a rejection of traditional Western beauty expectations. In Utah — a state literally founded and still operated by a religious community which believes body modifications are sins — the tattoo signals a rejection of the dominant way of thinking here.

Ironically, it wasn’t until my first year here in Utah, at BYU, that I started to want tattoos. As an angsty, closeted bisexual and a transplant from the Southeast, I immediately wanted to present myself as someone separate from the Provo hivemind. That’s not to say I didn’t love my freshman year, because I did. I made some beautiful friendships and I gained twenty-five pounds from Chick-Fil-A and dining hall donuts. But being surrounded by people who would report me to the Honor Code Office if they knew I was dating guys (when a trusted friend and roommate of mine put it together, he did just that) made me start considering new ways of self-expression. I needed both myself and the strangers I encountered to see that I didn’t carry the prejudice that was the status quo in Provo.

I think this is a common experience for residents of Utah, particularly in Salt Lake City. Members of the LDS Church sometimes feel a desire to signal their separation from the community’s more harmful ideas, while ex-Mormons sometimes feel a desire to signal their transformation since leaving. This unique cultural interaction makes for an intriguing attitude about body art, one that reinforces its social salience.

Tattoos as Catalysts for Self-Acceptance

In Utah, a tattoo certainly functions as social self-expression, but there’s something much more personal going on here, too. Body art is a way to reclaim one’s body after traumatic experiences or after spiritual shelves full of questions have shattered. It is an avenue for self-healing. By choosing to get an image sketched onto your skin forever, you must make the decision (even if subconsciously) that this is your body and you are the ultimate arbiter on its appearance. To those raised in high-demand religions, this can be a radical idea, as the body is often the epicenter of spiritual scrutiny. Regulation of food and sex is the high-demand religion’s favorite arena.

Throughout my teenage years, I internalized the message that the soul is divine but the human body, with all its pride and hunger and pitfalls of mortality, is inherently flawed. So, it was less of a conscious choice and more of a de-facto conclusion: I would follow the lifestyle that was going to save me from myself. What I consumed and what I did with my appearance no longer fell under my jurisdiction. I loved the flavor of coffee but I refused to drink it; I knew I wasn’t straight, but I fought with every fiber of my being to be.

When the self-repression finally became unbearable, I started taking some major steps away from the religion, but the process took years. Leaving a high-demand religion means untangling its ideas from your own, forcing you to hold each piece of yourself in the light and make the painstaking decision of whether or not you will carry it forward. After transferring to the U and settling into Salt Lake, I impulsively strolled into a tattoo studio one afternoon. I chose to leave the hatred of my humanness in the past and I decided there is no one who has greater authority on my body than I do. This is a decision every post-Mormon or ex-Mormon has to make at some point in the timeline of their healing.

My boyfriend always says that not all tattoos have meanings, but they all have stories. It’s true. The piece I have on my tricep, for example, literally just came from a T-shirt design I liked when I was online shopping. I’ve since attached a pretty special meaning to this tattoo, but it was a totally arbitrary process — the picture meant nothing at the start. And herein lies the ultimate beauty of body art. Tattoos don’t inherently mean anything at all. Objectively, they’re nothing more than ink injected into skin. All the rest — what the picture symbolizes to me (if anything at all) and what its existence tells you about me when you meet me — is completely dependent on subjective human perception. From a DIY stick-and-poke to Japanese irezumi, there’s no underlying universal reality behind a tattoo, so we get to create and evolve it.

I’m hopeful that as a society we’ll continue dismantling the stigma around body art. A personal preference to not alter your own skin is totally respectable, but the visceral, knee-jerk reaction to treat tattoos as dirty is boring and it’s rooted in the subjugation of indigenous lifestyles. Whether it’s used for self-expression or spiritual healing, a tattoo is a beautiful and powerful art form.