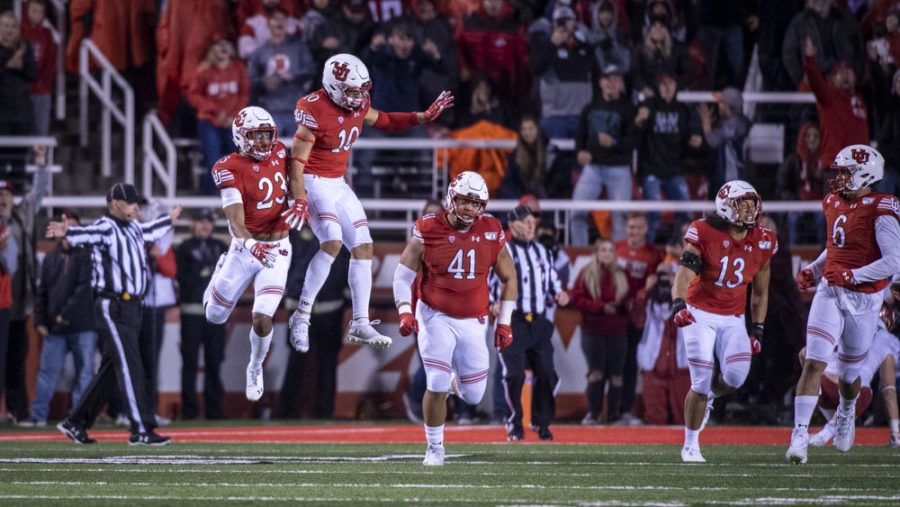 University of Utah senior defensive back Julian Blackmon (23) celebrates with R.J. Hubert (10) after stopping Washington State on their fourth down during an NCAA Football game at Rice Eccles Stadium in Salt Lake City, Utah on Saturday, Sept. 28, 2019. (Photo by Kiffer Creveling | The Daily Utah Chronicle)

Despite a difficult end to the 2020 football season, the University of Utah produced seven NFL Draft picks and five signed priority free-agent deals.

The first Ute selected in the 2020 NFL Draft was cornerback, Jaylon Johnson, who was taken by the Chicago Bears with the 50th pick in the second round. Johnson is coming off a remarkable season where he earned second-team All-America honors from Walter Camp, the AP, Sports Illustrated and USA Today. He was also first-team All-Pac-12 after starting in 13 games for the Utes. Before Johnson suits up for the Bears he’ll continue to heal his recently repaired torn labrum.

The next Ute taken in the draft was safety Julian Blackmon, selected 85th in the third round by the Indianapolis Colts. Despite a knee injury — which sidelined Blackmon late in his final season — he still had a remarkable 2019 campaign. Blackmon earned second-team All-America honors from the AP and AFCA, and he named a first-team All-American by Sports Illustrated. Blackmon was also fourth on the team with 60 tackles and tied for first with two forced fumbles.

Right behind Julian Blackmon was beloved Utah running back, Zack Moss. Moss was selected 86th overall in the third round by the Buffalo Bills, becoming the highest draft running back since 1982. Rightfully so, Moss came off a phenomenal 2019 season as he became Utah’s career rusher with 4,167 yards. In addition, he was also named Pac-12 Offensive Player of the Year and Pac-12 All-Conference first-team.

Following Moss was strong safety Terrell Burgess, who was drafted 104th overall in the third round by the Los Angeles Rams. Burgess started all 14 games for the Utes in 2019 as he led the backfield with 81 tackles and was second in fumble recoveries, recovering two. For his performances, he earned an honorable mention All-Pac-12.

With the 114th pick in the fourth round, the Arizona Cardinals selected defensive tackle Leki Fotu. Fotu was a defensive nightmare for the Utes opponents in his final season as he recorded 9 tackles for loss, 29 tackles and two pass breakups. These statistics would earn Fotu second-team All-America and first-team All-Pac-12 in his senior campaign.

Surprisingly, defensive star Bradlee Anae dropped to the fifth round but was selected 179th overall by the Dallas Cowboys. Not only did Anae have a fantastic final season, but he had a record-breaking career for the Utes. Playing defensive end, Anae was awarded the 2019 consensus All-American, 2019 Morris Trophy and two-time first-team all-conference. In addition to his awards, he broke two Utah school records with 30 career sacks and 210 sack yards. No doubt, Anae was a steal for the Cowboys.

The final Ute selected in the draft was defensive tackle John Penisini — drafted by the Detroit Lions in the sixth round, 197th overall. Penisini played in all 14 games and was second on the defensive line with 38 tackles. For his efforts, he was named Second-team All-Pac-12.

While it will be difficult for Utah to rebuild after the departure of so many key players, it is incredibly impressive that the Utes produced 12 players signing NFL contracts.

Head coach Kyle Whittingham continues to prove he is a phenomenal coach who not only cares about the needs of the team but also the individual potential and future of each player.