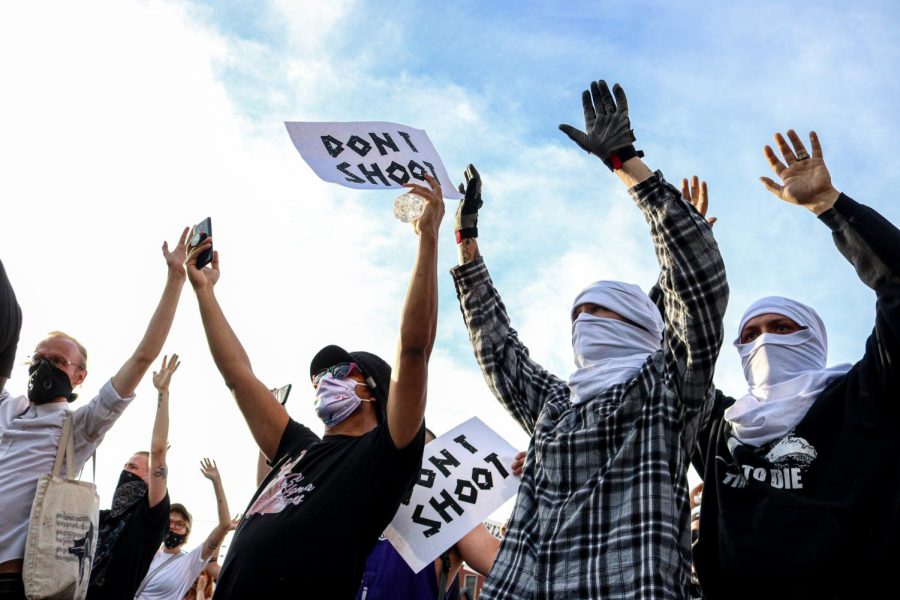 The people of Salt Lake City gathered again on June 1 to protest police brutality and the killings of black people across the country and in Utah. The protest was organized by the Party for Socialism and Liberation Salt Lake and started at the corner of Washington Square Park.

Protesters gathered around the park in masks to protect themselves against COVID-19, holding up signs which read “Black Lives Matter” and waiting to listen to the guest speakers.

Moira Turner, a member of PSL and the designated spokesperson for the group, said that they were highlighting the voices of black people inside and outside of their organization and planned it to be peaceful.

“Our goal as organizers and as people is to build resilient structures that combat racism over the long run,” Turner said. “We want to build these organizations of working class, oppressed and colonized people so that we can fight back over time.”

At the protest, there were about a dozen civilians that designated themselves as medical help with red crosses taped onto their clothes. They were handing out water, masks and other equipment to protestors.

The protest began with several speakers, the first being Daud Mumin.

“Everyday we come out here, demanding that our people are treated as human, not as animals, to stand on our streets and be able to breathe, to not see our men and women being kneeled on,” Mumin said. “Today, I’m angry. Stop f—ing quoting MLK.”

At one point he directly addressed Mayor Erin Mendenhall and Chief Mike Brown, calling them out for not being a part of the crowd that day and blocking off streets.

“Black lives are not expendable. We are not negotiable. We’re not here to ask, we’re here to tell, and every single day we are going to continue speaking louder and louder,” Mumin said.

Marvin Oliveros, with Justice for Cody, lost his brother Cody to police violence and spoke about the issues with police and the laws that he believes are problematic. He spoke about local law enforcement, specifically the Salt Lake Police Department harassing and stealing winter survival gear of unsheltered residents.

Oliveros also highlighted legislation like H.B. 415, which “prohibits a municipality from establishing a board or committee with certain powers over a police chief.” Utah Against Police Brutality claims this bill came after it worked to create legislation for a police oversight board.

During the speeches and chants, which were peaceful, an alert was sent out announcing there would be a weeklong curfew that would begin from 8 p.m. and last until 6 a.m.

Amaal, another speaker who is a senior at the University of Utah studying history and is a member of the PSL, spoke about corruption in the system as a whole.

“George Floyd and Breonna Taylor were not isolated events of a few bad cops. They were, rather, an example of an entire system rooted in the criminalization and death of black people in this country,” Amaal said.

Deja Gaston, who moderated the speeches, also spoke on the reason PSL organized the event.

“The deliberate devaluation of black lives, not just my life, but every person of color, is under the white supremacist capitalist state,” Gaston said.

Protesters then walked from Washington Square Park through the City Library to the Salt Lake Police Department building, where they were met with officers surrounding the building. Protesters proceeded to chant, “No justice, no peace, no racist police,”“hands up, don’t shoot” and “stand up, fight back.”

Thousands of people stood face to face with officers standing in front of the building, holding signs and chanting.

At one point, a Salt Lake police officer, Metui Tautuaa, took a knee after demonstrators asked officers to kneel with them in solidarity. An action meant to symbolize a way to peacefully protest, it started back when quarterback Colin Kaepernick sat and later knelt during the national anthem before his team’s preseason games of 2016.

When asked about why he decided to take a knee, Tautuaa said, “To keep them calm. We don’t want any violence. That’s the last thing we want to do.”

The gesture was considered small by speaker Daud Mumin. Mumin said the act itself was performative.

“That means nothing to me because you’re going to continue serving and protecting those that hold their interest. You’re going to be protecting and serving a very dangerous police force. I don’t have time to negotiate black lives,” Mumin said. “But what’s going to happen once [Officer Tautuaa] leaves the protest? Nothing.”

Demonstrators then moved to the streets, blocking off 300 E 400 S. In front of them were armed police officers and military style tanks. As the 8 p.m. curfew approached, organizers encouraged people to head back to Washington Square Park and some made their way to the Capitol Building.

Ten minutes away from curfew, the police standing face-to-face with remaining protestors said they were unsure how they would enforce the curfew, and it was not their call to make. When the time came, they moved protestors out of the street and onto the sidewalk, and then stood and watched protestors for around 30 more minutes.

A protestor, who wanted to remain anonymous, spoke openly to them about not being allowed to access the steps of the capital at the protest on Saturday, May 30.

“I see those steps as liberty. When I see police officers keeping me from accessing my capitol steps, I see that as a sign of oppression,” he said.

Eventually, Lex Scott, the head of the Black Lives Matter Utah chapter, showed up with a megaphone and told them to go home and not get violent. She emphasized her efforts to get a police reform bill passed and she didn’t want them to mess up the work she had put in.

A protestor threw a water bottle across the street towards police and rubber bullets were shot in response. The crowd at the street corner mostly dispersed at that point.

Some crowds remained at the Capitol, but streets near the Salt Lake City public library and SLCPD building remained filled with armed police. Police were located all over the city, blocking major roads and standing on the roof of the City library.

“The majority of people were arrested for failure to disperse,” the tweet said.

“All across the world, America is on trial for the crimes they have committed against us. This is nothing short of a genocide,” Amaal said in her speech to protestors. “We ask the people of the global community to stand in solidarity with us, like we are doing with our brothers and sisters out in Minneapolis, fighting for their lives.”