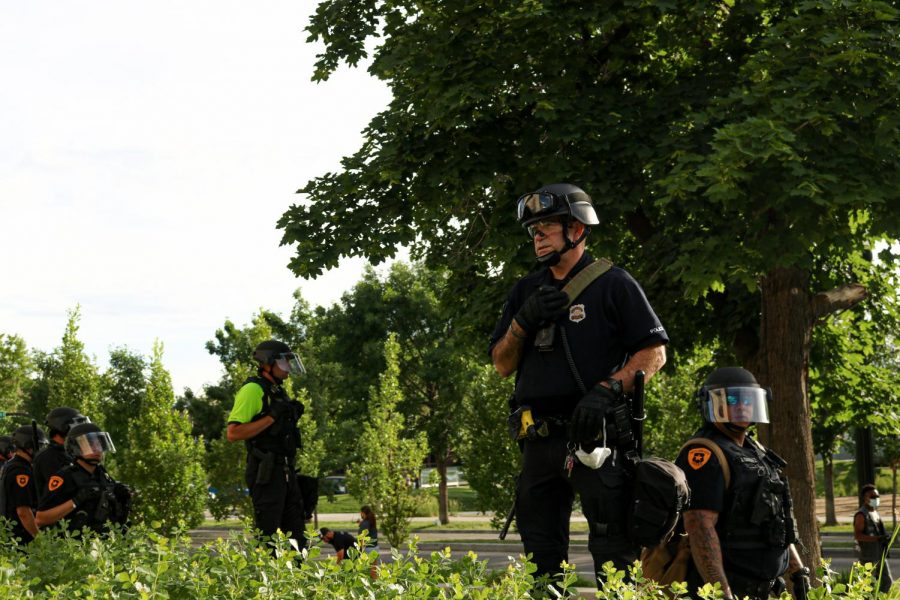 The council meeting, which lasted five hours, was mainly made up of civilian comments. The flood of comments came in light of several protests in Salt Lake against police brutality, which were sparked by the killing of George Floyd by the Minneapolis Police Department.

Protests held in recent days by Utah Against Police Brutality and the Party of Socialism and Liberation were met with a large police presence, the National Guard and enforced curfews.

During the June 1 PSL protest — which started at 6 p.m. —  a weeklong 8 p.m. to 6 a.m. curfew was announced. The announcement arrived while protesters were listening to speakers at Washington Square Park.

As the meeting started, a few council members took the opportunity to make statements about the recent events happening around the country. One such statement came from District 4 councilwoman Ana Valdemoros.

“As a person of color myself, I want to make it clear that I ran for office because I believe we can work on solutions towards justice and equality,” said Valdemoros. “I strongly reject attempts to make me take a side or politicize this issue. Demanding that we pick a side is a big reason we are in this mess. There are no sides. It’s not an either-or proposition. It is not us versus them. It’s just us.”

These statements were alongside city council members Amy Foster, Andrew Johnston and Darin Mono, who displayed “Black Lives Matter” signs in their background or badges on their clothes.

Both statements and displays of “Black Lives Matter” did not sit well with all attendees.

“I do see that many of you are wearing or displaying the words ‘Black Lives Matter,’” said Stephanie Schubert,“but I’m wondering what are you actually doing to stand for black lives? If that is all you are doing to show solidarity, your words are performative and meaningless.

Schubert moved on to Valdemoro’s statement at the beginning of the meeting, saying, “It is extremely disappointing to hear you state that you are neutral and simultaneously declare your support of police and black lives.”

Schuber then mentioned that “the National Guard and Police officers responded violently to protesters both in Salt Lake City and across the nation.” To close her comments, she said, “To quote Desmond Tutu, ‘If you are neutral in situations of injustice, you have chosen the side of the oppressor.’”

Many commenters expressed disdain and anger at this curfew. Attendees of the meeting were allowed two minutes for specific comments and then an extra two minutes in general comments if they wished.

One resident, who identified themselves as a homeowner across from Liberty Park, said curfews are a tool used in Latin America to suppress people, and they would “expect this from Donald Trump, but not from Erin Mendenhall.”

Over five hours and 114 comments, all but one reiterated the desire to decrease the police funding and presence of SLCPD.  Residents identified themselves as social workers, teachers, university students, local activists and homeowners.

Countless people also submitted comments via email before the meeting.

Many comments were similar in their demands. Residents asked for a decrease of at least $30 million for the proposed police budget, to redistribute the allotted money into education, resources for unsheltered residents, social services and some said “literally anything else.”

After 53 comments, Chris Wharton from District 3 informed the public they had already instituted a hiring freeze of officers, as many initial commenters had demanded a freeze after believing there would be a new hiring of 23 police officers.

Wharton also said to his knowledge, the only increases in the budget were for a victim-survivor advocate, increased de-escalation, implicit bias training and salaries they were obligated to increase.

“James Rogers’ behavior this entire meeting has been just kind of unbelievably dismissive and disdainful. I’m pretty blown away to see him leave the frame — to see him text, to see him visibly laughing at protester’s comments,” said Kelsey Harrison, an art history professor at the U.

Ashley Hamilton, an SLC resident, shared her personal experience with the police being dismissive towards her in an attempt to report a sexual assault. She said one officer gave her a form for filing a property destruction and another officer told her the case would most likely go nowhere.

“They did pick up my case and the guy was convicted,” Hamilton said, “but I had to go through two different men dismissing what I was saying, and that’s a reflection of a lack of training. If we are going to give them $84 million, we need to understand how that budget is being spent … because we have to do better. It’s unacceptable and we have to do better.”

Among callers were several University of Utah students, including the president of the Black Student Union and junior at the U, Maryan Shale.

Daniel Johnson, a junior studying business at the U, echoed this sentiment.

“First, I’d like to start off by saying I can see everybody on the stream is very tired at this moment, but just imagine not being constantly your life as it is mine as a black man in this society. You do not get a break and being up to 11:52 [p.m.] is not even the start of how I feel in this experience,” Johnson said.

Thandi Msiska, a black undergraduate student and research assistant at the U, said the amount of money allocated to SLCPD is abhorrent and embarrassing.

Msiska acknowledged the council advocated for Pride Month, but said by enacting the curfew, militarizing the police and allocating $84 million to SLCPD, they are disgracing the black trans woman, Marsha P. Johnson, who led the Stonewall riots.

“The world is watching, literally. Why are there swarms of officers dressed like they’re about to go to World War Three? And who are they fighting? It is clear that police officers in downtown Salt Lake are not there to protect people,” Msiska said.

Others highlighted that a curfew forces a confrontation between peaceful protests and police, it targets lower-income residents who may work graveyard shifts and could hurt black and brown people who are unaware of the curfew.

“I feel like this curfew is a way to continue to oppress black individuals in an attempt to avoid addressing the problem of police brutality and I quite frankly am pretty outraged by this. I demand that the curfew be lifted,” said Mackenzie Bledsoe, a SLC resident of District 7.

The American Civil Liberties Union of Utah posted on their Instagram that they felt the curfew was a violation of people’s constitutional rights and they would pursue steps to protect First Amendment rights of residents.

On Wednesday, June 3, Mendenhall tweeted she lifted the weeklong curfew which was enacted on June 1 after facing massive backlash from SLC residents. The curfew was lifted after two days of peaceful protests.

Mendenhall announced in a tweet she had signed the Obama’s Foundation commit to Action Pledge, which she said would make a review of force policies in an attempt to be transparent with the public.

After hearing all comments past midnight, council members unanimously motioned to postpone voting on the budget, which was frequently discussed to a future meeting.