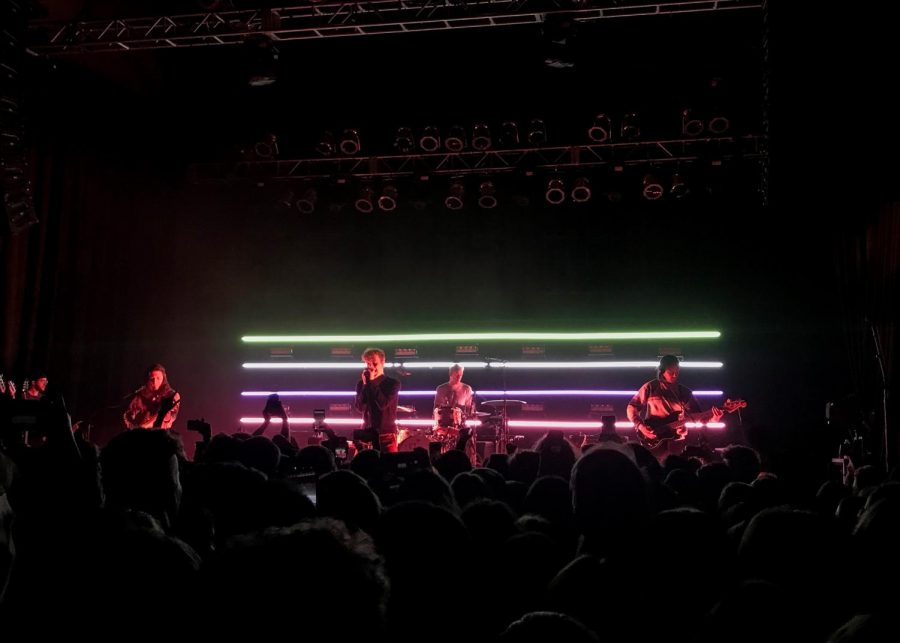 Earlier this year, on Feb. 21, COIN, an indie-rock band from Nashville, released their third album, “Dreamland.” Known for their upbeat and brightly optimistic anthems, this third album successfully continues the COIN sound that we’ve come to know and love, but they have also branched out to some more honest and less processed areas.

Now working under their own record label — The Committee for Sound and Mind — COIN clearly has much more control over their music. In the past, I’ve sometimes complained about COIN’s music bordering on “too pop” for my taste. With this latest album, however, COIN manages to balance between their pop-filled past with new adventures into airy, instrumental and stripped-back pieces.

Over the course of two years on the road, COIN wrote and recorded the album, “From Nashville to Seoul to London to Los Angeles… everywhere but a studio. For the past two years, we made this album in green rooms, bedrooms, airplanes and buses. ‘Dreamland’ is a patchwork quilt of everywhere we’ve been – a sonic journal of orchestras, out of tune guitars, church choirs and iPhone voice memos,” said Chase Lawrence, COIN’s lead vocalist.

Prior to the album’s release, COIN had released seven singles — “Simple Romance,” “Cemetery,” “I Want It All,” “Crash My Car,” “Let It All Out (10:05),” “Youuu” and “Valentine.” With only 14 tracks on the album, I was initially worried that the sheer amount of singles released before the album would mean that the album itself wouldn’t be as successful or exciting. Yet, upon my first listen of the album, I realized that “Dreamland” remained a captivating source of escape. Each track conscientiously flows into the next, and the range of classic COIN pop anthems to new indie ballads presents something for everyone.
Tracks
“Dreamland” opens with “Into My Arms,” a quick-paced dive into COIN’s anthemic brand, and in this opener, COIN fully welcomes the pop genre. The chorus is filled with the repetitive hook, “Get out, get out of my head / out of my head and into my arms.” The following tracks on the album are three of COIN’s more upbeat singles. Placed together, this introduction to “Dreamland” transports the audience to a place of optimism and happiness — even as COIN discusses themes of longing and navigating relationships.

“Dreamland” is the first of COIN’s albums to introduce instrumental interludes, and in this album, they effectively serve as transitional elements between various sections of the album. The first, “Dreamland Sequence” breaks up the first introduction portion of the album from the middle, and in this orchestral track, the choir leads into Lawrence’s repetition of “I wanna be here, I wanna love here / I wanna be here, I wanna see here.”

Through tracks like “Cemetery” and “Nobody’s Baby,” COIN continues to apply their optimistic indie pop genre to confront emotions of greed and finding yourself in the face of uncertainty. On “Youuu,” a track that COIN says will break your heart into 1,000 pieces, the lyrics beg, “don’t move on” because “it’s always been you.” Even in heartbreak, COIN offers a way to cope and move past painful moments. As one of my favorite tracks from the album, “Babe Ruth” offers a laid-back exploration of fate disrupting any plans. Lawrence sings in the second verse, “I was gunning for the rest of my life… whatcha gonna do when the universe puts your hand in mine?”

On each album, COIN presents a different take on their recurring track, “Lately.” In the “Dreamland” version, “Lately III” stands out as it blends orchestral elements with electric beats. In the pre-chorus Lawrence sings, “But who, who am I-I kidding? / I want you right back in my arms / Right back in my arms.” In this reference to the album’s first song, “Into My Arms,” COIN continues to be delightfully self-referential.

“Heaven Hearted” is the second musical interlude in “Dreamland,” and in just a minute and 22 seconds, the repetition of “Oh, tell me if it’s real” addresses the idea of coming back down to earth as if waking from a dream. This track smoothly and almost seamlessly transitions to the album’s final track, “Let It All Out (10:05).” The album continuously builds up to this finale, and “Let It All Out” is the culmination and a realization of what COIN has been trying to accomplish. COIN sticks to their true identity and finally strikes a chord of what is at their heart. In a tweet from the band’s account, they explain that the mic cuts out during the outro, and in that imperfection, the song is honest to reality.
Final Verdict
On the whole, “Dreamland” feels as though COIN is trying to find their identity after years of touring and working with various labels. COIN embraces this challenge rather than hide from it, and they have some truly spectacular moments on the album that suggest new directions for the band. In “Dreamland,” COIN recognizes their humanity and offers an escape from the current world as they introspectively consider what their future looks like.