Changing the Game: Athletes Share their Voices in Support of Black Lives Matter 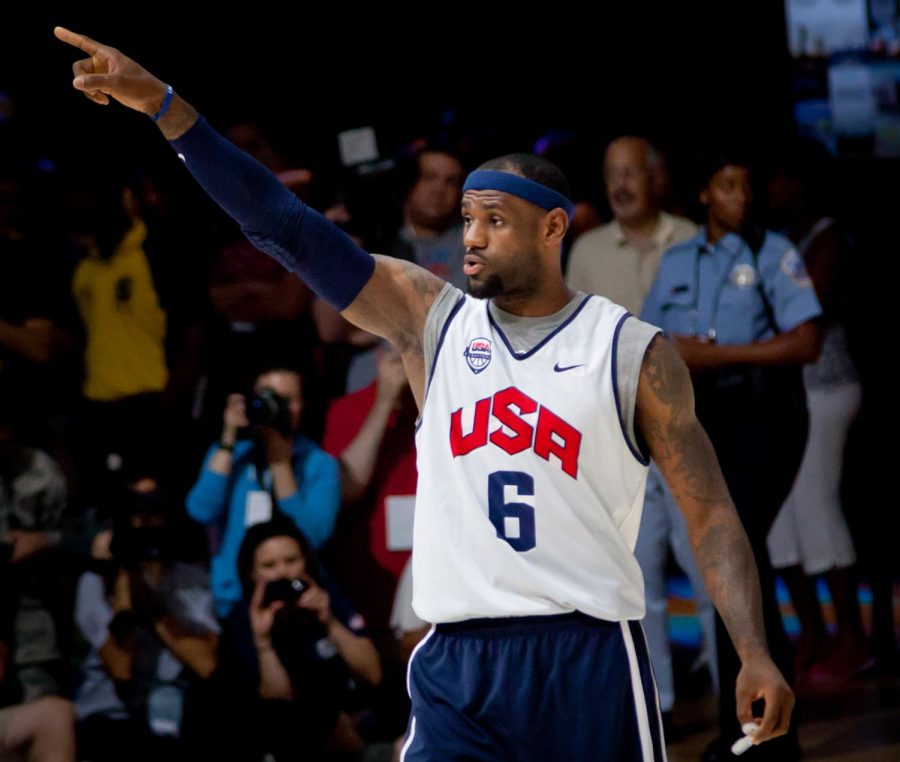 LeBron James in 2012 on the US National Basketball team. Image via WikiMedia Commons

As America moves into its second full week of protesting over the murder of George Floyd, an unarmed black man killed while in police custody, a growing number of professional and collegiate athletes have taken to the streets or social media to make their voices heard.

As the face of the NBA and one of the most recognizable and respected athletes in the world, LeBron James has been leading the charge of athletes expressing solidarity and calls to action for the Black Lives Matter Movement. James first posted a picture to Instagram of former Minneapolis police officer Derek Chauvin kneeling on Floyd’s neck next to a picture of former San Fransisco 49ers quarterback Colin Kaepernick kneeling in protest during the national anthem. James captioned the post, “Do you understand NOW!!??!!?? Or is it still blurred to you??” James continued to post BLM material in the following days.

A majority of NBA players followed James’ lead in posting support for the protests against police brutality. Rockets guard Russell Westbrook and Spurs guard DeMar DeRozan took to the streets in Compton for a peaceful walk. Joined by rapper Kendrick Lamar, the trio made a big statement by taking a direct part in the protests. Other NBA stars, such as Golden State’s Steph Curry and Klay Thompson were spotted participating in a march in Oakland.

Not only are the players taking a stand, but NBA coaches have taken action and formed a committee to address racial injustice and reform. The committee includes coaches from around the league, including Gregg Popovich, Steve Kerr, Lloyd Pierce, David Fizdale, and Stan Van Gundy. Considering that about 75% of NBA players are black, the league has been the most vocal of mainstream sports.

Jumping to the NFL, the support for protests has been abundant from superstars such as Patrick Mahomes. However, the NFL has been under much more scrutiny than the NBA, stemming from their past handling of players kneeling during the national anthem. NFL players and fans criticized the league so harshly that it prompted Commissioner Roger Goodell to release an official statement that the league had mishandled the peaceful protests of years previous and supported current movements for justice.

Goodell’s statements have incurred criticism from a variety of sources, most notably President Donald Trump. In a tweet posted on June 7th, President Trump took a direct aim at Goodell and the NFL.

“Could it be even remotely possible that in Roger Goodell’s rather interesting statement of peace and reconciliation, he was intimating that it would now be O.K. for the players to KNEEL, or not to stand, for the National Anthem, thereby disrespecting our Country & our Flag?” Trump said in the tweet.

While the protests, both current and past kneelings, have been focused towards drawing attention towards police brutality against the Black community, many fans continue to have a negative view of the kneeling, claiming it is offensive towards the US flag and the armed forces.

Athletes from every sport have chimed in to show their support for the BLM movement. While this is not the first time athletes have used their platforms to take a stand, the sheer volume of athletes and the united message is genuinely astounding. As protests and calls for change continue, athletes will play a pivotal role. As the stars of the country, wielding immense influence, their actions and statements will serve to either galvanize or alienate many.