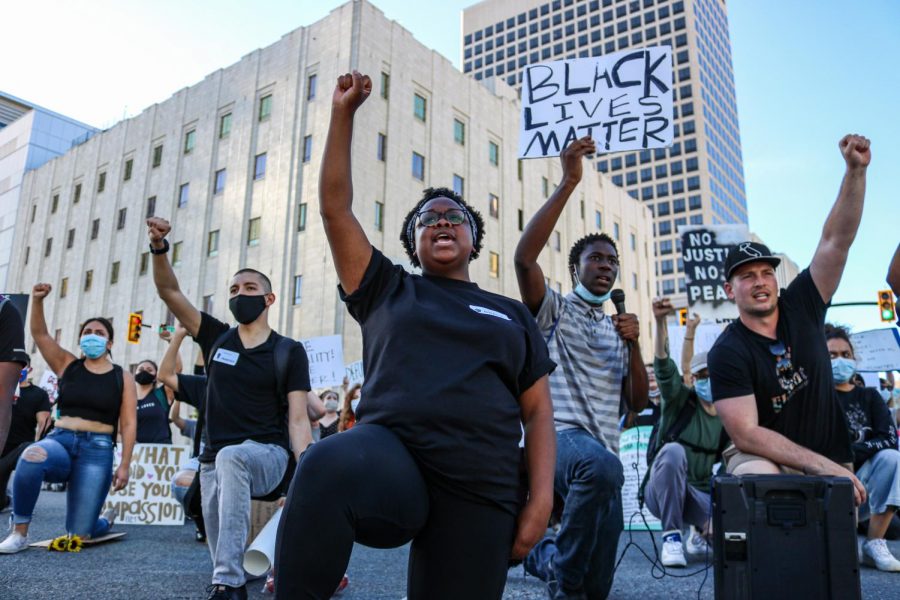 Grace Cunningham and Ammon Roberts take a knee with fellow protestors after marching from the state capitol to the Wallace Bennett Federal Building in solidarity with the Black Lives Matter movement on June 9, 2020. (Photo by Ivana Martinez | Daily Utah Chronicle)

After the ninth day straight of protests in SLC, the PSL organizers have three main demands — to defund the Salt Lake City Police Department, re-open all cases in which SLCPD has killed someone to have them investigated by a non-police body, and release all protestors immediately, dropping all charges.

“We need to learn, we need to educate ourselves because Frederick Douglas said, ‘knowledge makes a man unfit to be a slave’ and ‘we will no longer be slaves to this state,’” Daud Mumin said. “And we keep on chanting, this is what democracy looks like. No, this is what fighting against fascism looks like.”

Another speaker, Prince Mugisha, spoke about his grandfather’s experiences working under the Belgian colonial regime and how his family fled to America to get a better life, but couldn’t flee the racism here either.

“The truth is that every Black person has a shadow of racism and discrimination that follows them even more closely than their actual shadows. A shadow that we cannot escape by going indoors because even in our own beds we can be murdered in cold blood like our sister Breonna Taylor,” Mugisha said.

Protestors chanted “take it to the streets, to f— the police,” as they marched to the courthouse and down SLC streets.

There they heard from SLC kindergarten teacher Jeremy Reynoso, who spoke about the prison industrial complex, the disproportionate jailing of people of color, specifically Black people, and the need to fund education here in the state.

“When we don’t value education, we fail to put it in our state budgets. Failing to fund public education instead, we are investing in injustice, fear and long-suffering. There is no freedom in ignorance,” Reynoso said.

Organizers emphasized that instead of having police they need to stop criminalizing poverty, homelessness and drug addictions by actually addressing the root issues, which they said is capitalism.

“When we lift people out of poverty and choose to invest in the people, then we divest from the hardships communities have to face, who get by on a day-to-day basis, have been working their entire lives, just to have basic necessities,” Gaston said.

Speakers at the protest pointed out the system was never broken; it’s been working the way it’s supposed to. They marched once more to the Gallivan Pavillion and then back to the Federal building.

While protests organized with similar intentions have been taking place consistently for over a week, momentum has yet to slow down and protests are planned for the rest of the week.

Typically protests take place at 6 p.m. at the Utah State Capitol. Demonstrators march through the streets and go on for hours demanding change and proclaiming “Black Lives Matter.”

While calls to defund the police get louder in the streets, SLC residents have also consistently contacted the SLC council and taken over two consecutive Tuesday meetings with demands to decrease the proposed $84 million police budget for the 2020-2021 fiscal year.

The number of participants in the June 9 city council meeting exceeded 150.

Many of these comments encouraged decreasing the police budget and called for the eventual abolishment of the police department. Many participants addressed the option of police reform but cited it as being proven to be ineffective.

“I don’t care about implicit bias training, or how much SLCPD supposedly cares about people of color in our community because the death of our community member Bernardo Palacios says otherwise,” Ted Hershberger said.

Several others called for the firing or resignation of Police Chief Mike Brown, as well as the prosecution of the officers involved with the shooting of Bernardo Palacios-Carbajal.

The tone of comments ranged from disappointed and frustrated to furious and upset. A few participants were in tears as they addressed the city council, all called upon the community leaders for accountability and action.

“There’s not one thing that any of us can do that can bring Bernardo back, nothing we do will bring him back,” Stephanie Finley said, “but whatever we do moving forward, we could save every other life that would be taken otherwise. And Bernardo should not be dead right now.”

In the working session earlier this afternoon, Chief Brown said that there is no systemic racism within the police department — which many participants addressed and called it a lie.

“I demand for the resignation of Chief Brown, who was shown to be completely out of touch with the needs of this community, which for many folks means the difference between life and death,” Devon Esick said.

“I’m a part of the already small, underserved and underrepresented community in Utah that is the black community,” Natasha Cadet said, “we make up only 1.06% of Utahns, but 10% of people killed by the police at a disproportionate rate of 9.21 times.”