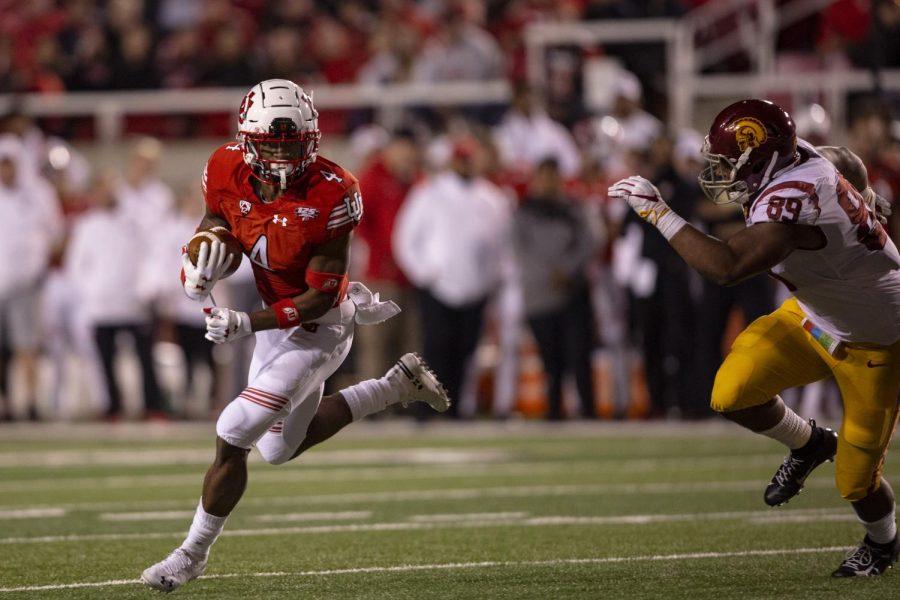 University of Utah freshman running back TJ Green (4) carries the ball against the USC Trojans during an NCAA Football game at Rice Eccles Stadium in Salt Lake City, Utah on Saturday, Oct. 20, 2018. (Photo by: Justin Prather | The Utah Chronicle).

As the Black Lives Matter Movement continues to make waves across the country, athletes at the University of Utah are showing their support for the cause no matter where they are.

While most teams and individual coaches have released statements in support of the cause, some student athletes are going beyond the notes app in their phone to support the important cause.

Utah football junior running back TJ Green has been attending protests in his home city of Chandler, AZ., while junior snapper Noah Rodriguez-Trammell has been taking photos at the protests in downtown Los Angeles. Sophomore wide receiver Cameron Gardner has also shared photos of himself at protests with a sign that read “Keep Rising, Be the Change.”

The Chandler Police Department also shared a photo that showed Green walking with a local officer during the protests.

Graduate transfer quarterback Jake Bentley released a powerful statement about the movement, writing about how just being there for his Black teammates isn’t enough anymore.

In his statement, he continues by saying, “Why can’t we be the generation that puts an end to racism? Why can’t we shock the world and kneel with a fellow black teammate? Your views on the kneeling might be completely different than theirs. But that’s not the point, the point is that you recognize the pain and suffering that the black community is in and have been in for generations due to racial inequality. While you might not have experienced the same pain, you recognize the need for change in America.”

Former Utah football corner Jaylon Johnson shared his thoughts stating, “As a black man, a father, and a leader, this is my message. These current and recent events shouldn’t bring the Black and minority community together due to the fact that it has been like this. We need to stay together and grow together. We have to treat each other with love and mercy as we want others to do to us. We have to educate our generation and the ones that are coming after us that there is no divider and all men and women are created equal. I wouldn’t know what I would do if my daughter was treated as if she was beneath anybody on this earth.”

On June 4, a group of players from the women’s basketball team was at a protest at the Utah State Capitol showing their support of the cause.