“Mayor, What Happened to His Fingers?” Protesters Head to SLC DA Office to Demand Justice for Bernardo Palacios 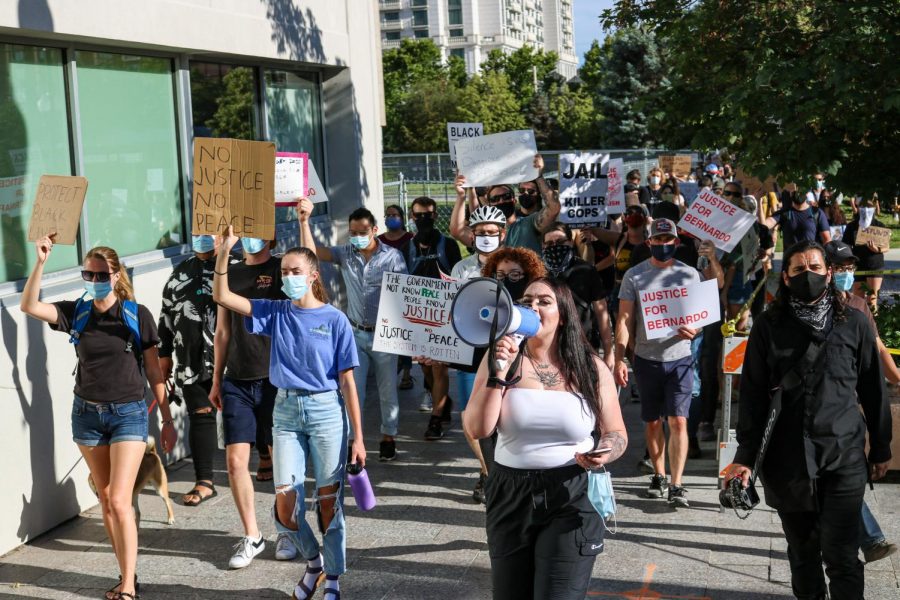 Every night since Wednesday, June 17, the day Bernardo Palacios-Carbajal’s case arrived on Salt Lake District Attorney Sim Gill’s desk, Sofia Alcala and protestors have been outside his office demanding justice for Palacios-Carbajal.

Palacios-Carbajal was fatally shot in the back over 20 times by police officers on May 23. The bodycam footage was released on June 5, and showed Salt Lake City police officers chasing the man several blocks before shooting him.

His last words were, “Officer, I don’t want to die.”

“I started out protesting for Bernardo by myself on his corner… Now look,” Alcala said as she gestured to the crowd of over 100 protesters.

The protesters covered windows with signs that were mass-produced by a group — Local Propagandists — and pictures of Palacios-Carbajal.

Alcala expressed frustration as she talked of a deal with the office that they had made last night. They said they would leave all the posters up if protesters stopped using a ladder and a specific type of tape. However, all the signs from the June 24 protest were removed by the morning.

Victories were also noted, though, and Alcala said Sim Gill has plans to release his report on Palacios-Carbajal’s death next week, a process that has typically taken about 6 months for other victims of police brutality.

After chanting in front of the offices, “DA, what’s your play? Put these killer cops away,” protestors marched to 400 S. and Main St., where they occupied the intersection, blocking any cars or Trax trains for over 30 minutes.

Alcala said they decided on that specific location because all three Trax lines run through the intersection, and they wanted to mess with the city’s money. Protestors stood there, against ongoing traffic until police officers escorted vehicles down the road.

“In this capitalist country, they don’t care about our f––ing lives, but they care when they are losing money,” Alcala said.

Emanuel Hill, another organizer, said that if they can put enough pressure on Sim Gill and turn the community on him, he believes the DA will prosecute the cops.

“Honestly, what we’re trying to do is piss the community off enough to go to the source of the problem and that’s Sim Gill,” Hill said.

A prominent demand among the protestors was the release of the full body camera footage on May 23. Partial footage was released on June 5, but the video cut off before it showed what happened to Palacios-Carbajal’s fingers.

While they marched, protestors chanted, “Mayor, what happened to his fingers?”

When the Rose Park resident was buried on June 6, the Palacios family buried him in gloves because all 10 fingers had been shot off of his body, despite body camera footage revealing his fingers were still attached after he was dead.

Once all the cars stopped by the protest moved out of the intersection, protesters moved to the Salt Lake public safety building, which houses the SLC PD. The building was surrounded by barricades after damage was done to the building and several protests met there earlier in the month.

A group of protesters immediately went to work and started moving barricades, cutting zip ties and breaking them down. After only about 10 minutes they had the barricades in piles and protesters could walk straight up to the doors, where they taped more posters demanding justice.

Some protestors picked up all the trash and police tape and laid it on the concrete to spell “BLM,” meaning Black Lives Matter.

The group then moved to 500 S and State St. and continued chants before returning to the DA’s office and dispersing for the night with plans to come back tomorrow, and every night after until justice is served.

A member of the Rose Park,Brown Berets who wanted to remain anonymous said that if Sim Gill does not prosecute the cops that killed Palacios-Carbajal, they will continue to show up every night until they get justice for his family.