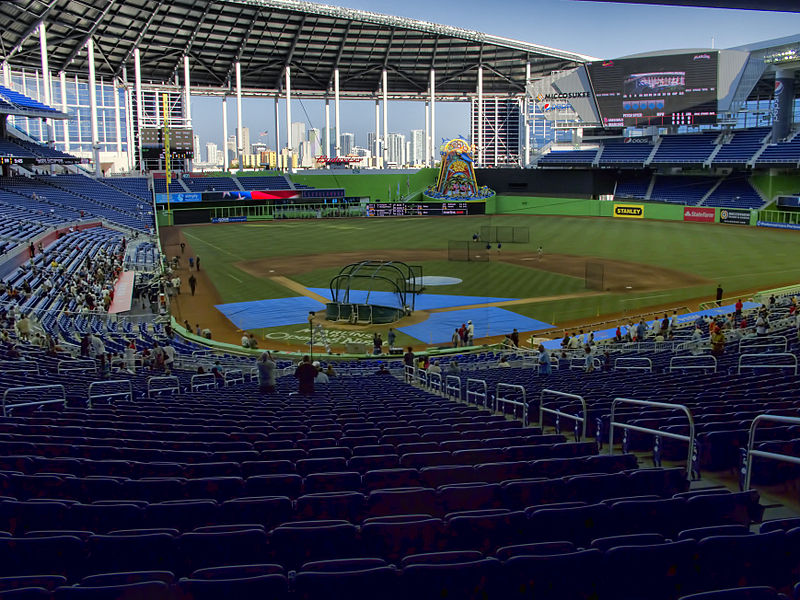 The field at Marlins Park with the Miami skyline in the background. In left centerfield is the Home Run Feature that animates should the Marlins hit a home run. The equipment on the field is for a Marlins batting practice in preparation for Opening Day 2012. (Image via Wikimedia Commons)

Baseball is a sport of rhythm. A steady day in and day out drum roll of games. There is no lag time, no multi-day breaks like the rest of the big four North American sports. It is a constant. That constant has been corrupted by the pandemic.

Baseball has a problem. That problem stems from two teams, the St. Louis Cardinals and the Miami Marlins, who have both had massive breakouts over the past two weeks. Major League Baseball rosters that experience this outbreak have seen it take a 50% clip of their perspective rosters. To put that in perspective, half of a 53-man roster in football is about 27 players.

The Marlins began the MLB’s roller coaster dalliance with coronavirus just over two weeks ago. Eighteen players on the Miami Marlins tested positive for COVID-19. That is over half of the team’s 30-man roster. Even more concerning is the fact that while playing the Phillies, the Marlins allowed some players with positive COVID-19 tests to play.

That disastrous decision delayed the Phillies series for the next week, as well, as they awaited test results out of an abundance of caution. Altogether, 21 total games have been postponed due to outbreaks of COVID-19 throughout MLB.

Just this weekend, the Cardinals had 13 players test positive for COVID-19. Canceling their series with the Detroit Tigers, yet they are still expected to play the Cubs at the end of this week. The Cardinals reportedly rumored to have ventured out to a casino together, though it is just a rumor and has been denied by the organization it could provide a plausible explanation for the teams break out.

The Cardinals report coming out just days after Rob Manfred, the commissioner of the MLB, threatened to shut down the baseball season if numbers did not start to go down, a threat the commissioner has not followed through on yet as of August 4.

MLB is in a league of its own right now in American sports. It is the only league in the United States to be holding competition outside of a bubble. The NBA reported a week ago that for the second straight week, no players had tested positive for COVID-19 within their bubble. The National Hockey League also reported that one week into its return to play, there have been no positive tests within its Toronto- and Edmonton-based bubbles.

Meanwhile, the NFL has had over 40 players opt out of its upcoming season and a major head coach, Doug Pederson, test positive for COVID-19. Both Matthew Stafford and Gardner Minshew were originally placed on the league’s COVID-19 list, but were taken off after Stafford’s test was a false positive and Minshew joked that the virus “took one look at him and ran the other way.” They are also planning on not playing within a bubble.

This week Pac-12 players have begun to speak out regarding testing protocols and procedures at their respective schools, threatening to not play if major changes aren’t made.

All this news has dropped within the past two weeks. Such is the world in 2020. There is mounting evidence on what does and does not work as a successful way to play sports through COVID-19.