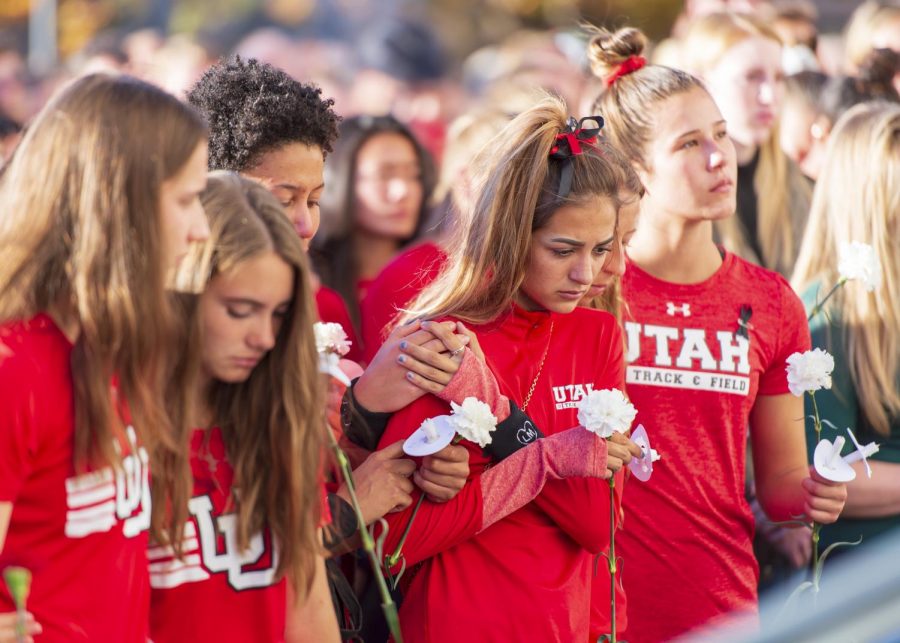 The Utah women's track and field team, students, staff, family and friends attend a vigil on the steps of the Park Building for Lauren McCluskey who was tragically killed on campus at The University of Utah in Salt Lake City, Utah on Wednesday, Oct. 24, 2018. (Photo by Kiffer Creveling | The Daily Utah Chronicle)

Emails between Jill McCluskey and University of Utah administrators obtained by The Daily Utah Chronicle show that Jill voiced concerns about sexism in the U’s police department to university administrators months before she and husband Matthew McCluskey filed a $56 million lawsuit against the U based on those same concerns. The U did not respond, and the McCluskeys later stated they filed their lawsuit because of this. In the emails, Jill also voiced concerns about sexism in the independent investigation surrounding their daughter’s death, which is not mentioned in the suit.

Allegations of Sexism in the Police Department
Three days after Lauren McCluskey was murdered on the University of Utah campus by her ex-boyfriend Melvin Rowland — a sex offender who lied to her about his name, age and background — U President Ruth Watkins announced there would be an independent investigation into campus police’s handling of Lauren’s case before her death. However, emails between Jill, Watkins and members of the committee allege sexism directed toward Jill.

The committee consisted of three members: John T. Nielsen, Sue Riseling and Keith Squires. “The members of the 2018 Independent Review Committee were selected based on their decades of law enforcement experience and the professional insights each brought to the task,” said Brooke Adams, executive communication manager for Ruth Watkins. According to a profile given in a press release from the U, Nielsen was an attorney and “[served] as the state’s Commission of Public Safety, Chief of the Criminal Division of the then Salt Lake County Attorney’s Office and legal advisor to the Salt Lake Police Department.”

On Oct. 29, 2018, about a week after Lauren’s murder, Jill emailed information for independent reviewers to Watkins, then-Chief of Campus Police Dale Brophy, then-Dean of Students Lori McDonald and Daniel Reed, Senior Vice President for Academic Affairs. Among other things, her email said that she had spoken with a friend of Lauren’s who had been there when Lauren met with police in person before her death. This friend — whose name is redacted in the email and could not be reached for comment — told Jill that the police’s reaction to Lauren made it seem as though the officers did not believe she was being blackmailed, and “downplayed it.” Jill’s email claims the friend informed her the police told Lauren the messages were a scam and that Rowland’s cell phone had been “hacked.” Jill also wrote that this friend said the police rushed Lauren through her report of the blackmail messages, and told her they only wanted information about that extortion accusation and nothing else. Lauren had tried to give them more information anyway.

Watkins responded to Jill’s email, thanking her for the information. The U later acknowledged in a Jan. 2019 statement that campus police “viewed Lauren McCluskey’s case through the lens of an extortion case, rather than as a case of potential interpersonal violence. As a result, there was an insufficient sense of urgency regarding the case.”

Requests for comment from Watkins were declined. Instead, Adams responded with information about the review on her behalf.

Allegations of Sexism in the Independent Investigation
On Nov. 9, 2018, less than a week after the investigation was formally launched, Jill wrote in emails to administrators that she was “losing confidence in John Nielsen as the chair of the review committee.”

Jill’s concerns started when she told McDonald that Nielsen had “bypassed” her and talked to her husband Matthew instead, despite the fact that she “was more involved in the police process.”

“He is reviewing how the police responded to a young woman’s complaints,” Jill wrote in her emails. “What is concerning is that, in appearance, he is exhibiting bias against women by only contacting my husband and bypassing me.” McDonald then arranged with Jill to give her contact information to Nielsen, although Jill assumed he already had it. He had not yet contacted her during the course of the investigation.

“I recommend that another female leader in law enforcement (or someone from outside Utah) head this committee,” Jill wrote.

McDonald responded, confirming that she had given Jill’s contact information to Nielsen. She also said that he had interviewed several students and staff members since then and may not have had time to reach out to her.

There do not appear to have been any other messages responding to these initial concerns. It’s unclear whether Jill’s emailed suggestion was considered.

On Nov. 16, Jill again emailed Watkins with more concerns about Nielsen. She wrote, “John Nielson’s words and behavior continue to make me doubt him. For example, I tried to explain to him that Lauren’s friends [redacted] told me that they felt he cut them off and steered the conversation to only the questions he wanted to discuss as they tried to provide him with information they felt was important and relevant.”

“He responded that he couldn’t imagine that to be the case and believes he is a good interviewer, dismissing the feedback I was trying to give him. He said that he will contact the students again, but if he does so in the same manner he did previously, it will not be helpful or productive,” Jill continued. “Perhaps Sue should be given the follow-up interviewing task, and I would go further to suggest that in interviewing females, Sue should be the member of the committee to do so. I am concerned that John will make [redacted] not want to share any information with him.”

Jill also wrote that Nielsen had asked her if she trusted “the review committee to do a good job” and she told him, “Not entirely,” because she would prefer more people with experience from outside Utah on the committee and because Nielsen hadn’t called her until she “insisted for him to do so.” In the email, Jill said that Nielsen became defensive after this and that he had given two different stories about his reasons for not contacting her earlier. In one, he told her he had originally felt “it was ‘sufficient’ to call Matt only” and in another he apologized and “said he had not gotten around to calling” her yet.

No one appears to have ever responded to this email. Nielsen could not be reached for comment.

“I’m not sure why they stopped responding,” Jill said in a later interview with The Chronicle. “I think they didn’t want to respond in the way I wanted, and thought it wouldn’t be fruitful.”

According to Chris Nelson, communications director for the U, the independent review committee did not go through any unconscious bias training. “One would expect they’re already bringing to their position a great deal of knowledge and sensitivity,” Nelson said. “We would assume … it would almost be inherent.”

Nelson noted that the one hesitation the university would have with providing these trainings is that independent reviewers could think “your requiring me to do training wouldn’t make me independent,” he said. Committee members were chosen because they were “independent of the university, but also knowledgeable enough to understand the context,” Nelson said. There is no formal selection process he is aware of because of how infrequently they occur, though he said members were chosen based on experience doing independent reviews and their familiarity with the context.

Of Nielsen, Jill said in her interview with The Chronicle, “He didn’t really listen to Lauren’s friends. … He’s not very self-aware, and even if he had training, I don’t think it would stick.” Jill stated that the U knew she did not appreciate her interactions with Nielsen, and that they did not send him to her house to report the findings of the investigation despite his heading the committee.

“I was being discounted and disrespected as a woman, and I was just very surprised,” Jill said in her interview. “It seems like in the other realms of my life I am respected. … I thought it was so ironic that he was investigating if a woman’s concerns were not taken seriously.”

The independent investigation concluded that there is no evidence that Lauren’s murder could have been prevented. No U employees — inside or outside of campus police — were disciplined for their handling of Lauren’s case. Some officers have since left the department or been disciplined for subsequent issues. Miguel Deras, an officer who showed explicit photos of Lauren to co-workers, was recently fired from the Logan Police Department over his misconduct in the case.

The Lawsuit
On another occasion on Dec. 21, two days after the investigation’s results were released, Jill emailed Watkins, expressing concerns that the U would not do enough to address safety issues. Although Watkins stated that she wanted to partner with the McCluskeys to help make campus safer, she also stated that the employees would be held accountable only if they did not improve, and did not respond to a follow up-email from Jill about holding employees accountable for what already happened.

The McCluskeys say this lack of response is part of what led them to sue the U, alleging in court documents that “the university has an official policy or custom of treating women differently based on irrational gender stereotypes,” and that this culture kept officers from preventing Lauren’s murder. At the press conference announcing the lawsuit, Jill said, “The university has taken no responsibility for Lauren’s preventable death. No one has been disciplined or held accountable in the campus police or housing. The same culture prevails in the campus police.”

The McCluskeys are going forward with a second $56 million state lawsuit after settlement was not reached in the federal one.