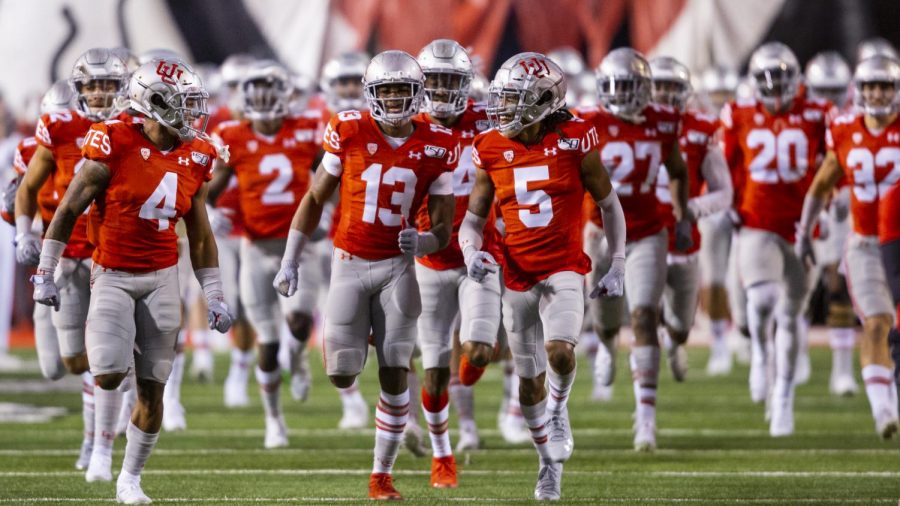 The University of Utah Football team rush onto the field prior to the start of the game in an NCAA Football game vs. UCLA at Rice-Eccles Stadium in Salt Lake City, UT on Saturday November 16, 2019.(Photo by Curtis Lin | Daily Utah Chronicle)

The University of Utah football team has handsome memorable jerseys — both good and bad — since signing their contract with Under Armour. There are just so many that everyone seems to have an opinion on which one is the best. So we decided to rank our favorite Utah football jerseys of the Pac-12 era.

In 2018, the Utes brought their coldest uniforms to the desert as they faced the Sun Devils of Arizona State. This new and improved whiteout uniform used a chrome and oversized drum and feather on their helmets. With the white top and white bottoms, the Utes truly put forth a uniform worthy of those mighty Wasatch mountains to the East. Unfortunately, the Sun Devils brought too much heat as they would upset Utah 38-20, but the Utes still looked good with that ice cold drip.

It takes a lot of courage to make a duck your mascot of choice. But when a former alumnus was the co-founder of Nike, it’s a pretty safe bet that you’ll have some unique uniforms that include the coolest looking feathered helmets around. That was until 2018 when the Utes decided to paint some feathers of their own as they welcomed Oregon to Rice Eccles. With a red helmet, hawk feathers, black top and red bottoms, it was indeed time to do some duck hunting. The Utes would go on to defeat the Ducks 32-25, and let’s just say they should think twice next time before flying south for the winter.

To commemorate the 150 years of college football the Utes went back in time — even further back than the last time BYU beat Utah — to the 1960’s as they wore a uniform resembling the 1966-67 seasons. With the alternate interlocking U’s logo, scuff marks hand painted onto a chrome helmet, bright red top and grey pants, the Utes took a page out of the history books and painted it perfect. To cap it all off, the Utes defeated both UCLA and Colorado while wearing these beauties. Hopefully, history is not forgotten as these are a much better looking throwback than the Utes have worn in recent homecoming games.

Dark Side of the Ute: Black Ute proud helmet, black top, black pants (vs Cal in 2019)

For the last few years, Utah has decided to pay tribute to the Native American tribe that the school’s mascot is named after with a uniform. This has included a tribal design inside of the university’s block U and then a stripe of the same design down the middle of the helmet. This year, the Utes took that very design and added a bit of swag with an all out dark mode. With a chrome Ute Proud tribal design, matte black helmet and black uniform to match, the Utes embraced tribal designs while looking incredibly intimidating as they crushed Cal 35-0. In summary, the dark side is a pathway to many abilities some consider to be — unnatural.

It’s no secret that for the last decade the Holy War has been a bit one sided. In fact, the last time BYU beat Utah, Barack Obama was in his first year of presidency, Apple had just released the iPhone 3, Utah was still in the Mountain West and Kalani Sitake was coaching at Utah. Despite it being so one sided, it’s nice to see that the U still puts on their best business attire to face that team down south. The Utes continually remind the Cougars that red is truly better than blue as for the last 2 seasons — and victories — the Utes have worn a red helmet with a clean white stripe down the middle, the classic drum and feather logo, red top and red bottoms. The Utes have done Ol’ Crimson proud as they have continued to dominate the Cougars in their superior red uniforms.

Ever since their first introduction, I’ve loved the Ute proud helmets but the version we were given in 2018 was really nice. While this year’s helmet had only a minor change from the year before, the stripes that were added to the tribal stripe that already donned the helmet was just the touch the helmets needed. You’ll see from my list that I love a good uniform set that has some contrast and the white helmet stood out so much more when it was accompanied by the red top and pants. Plus, we got a very iconic moment from this combo when Britain Covey threw a touchdown pass to Tyler Huntely.

This might be an unpopular opinion but I actually didn’t mind the jerseys the team used to don with the mountains across the sleeves. Some of the combos were better than others but when it was done right they were so nice. My favorite combination with that jersey still came when the Utes headed to Berkley to take on Cal. The all white uniforms looked so cool in contrast to the red and white mountains on the sleeves on the jersey. I’ve also always loved the whiteout helmet and wished they wore it more often because it is just so icy.

I have a love/hate relationship with the hand painted helmets that the team wears. Some have definitely been better than others — I’m looking at you, helmet with the cartoon U on the back — but there was just something so sleek about these helmets. Pair it with the white top and the red bottoms that just made it look so much better than it did when they wore it versus Oregon earlier in the season — I still love it with the black tops but not as much as I love it in this version. I think the red white red combo is severely underrated, the white tops always seem to pop more to me when they are sandwiched between a red helmet and red bottoms.

No, we are not Ohio State: 150 years of college football throwback (vs UCLA and Colorado in 2019)

If you know me, you know how I am not the biggest fan of the throwback uniforms the team usually wears for homecoming, but my stance on throwback uniforms totally changed when the equipment staff revealed this beautiful combo at the beginning of the season last year. I loved every little detail of this combo, from the lettering on the sleeves to the hand painted scuff marks on the helmet. It was also very refreshing to see a different version of the interlocking U’s that we usually see on the throwback uniforms. I really hope we get to see these uniforms again because they are something magical.

Yet another combo with the Ute proud helmet, why? Because they never fail to be some of the best uniforms the team wears. I love the matte black helmet always, and pairing it with a chrome version of the Ute proud block U and stripe is something that I never knew I needed until I saw it. I also love this combo because it takes the usual concept of blackout and turned it on its head. I would love to see the equipment team do something like this again for future blackout games or other themed games.