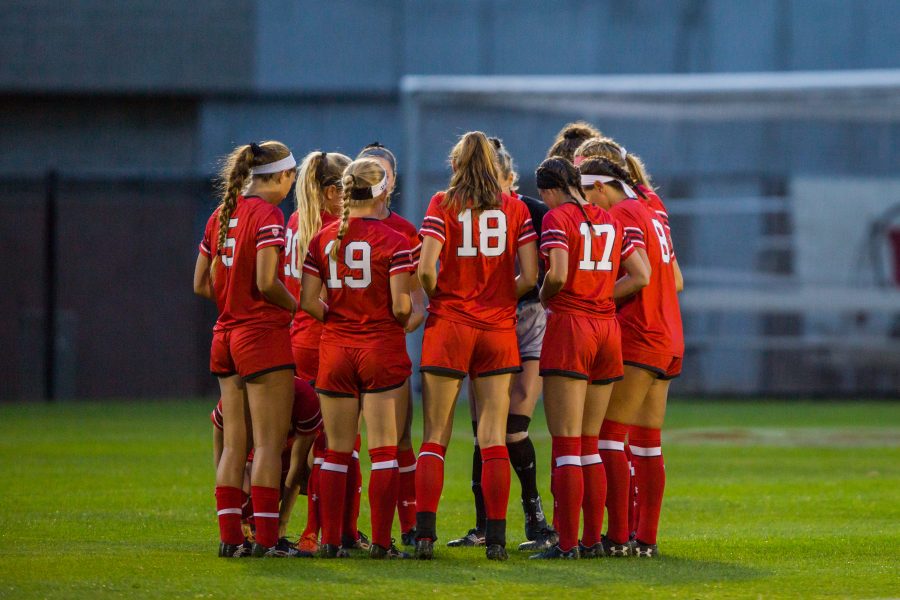 The University of Utah Women's Soccer team huddle up prior to the start in an NCAA Women's Soccer game vs. Washington at Ute Soccer Field in Salt Lake City, UT on Thursday October 04, 2018. (Photo by Curtis Lin | Daily Utah Chronicle)

On March 30, the eve of the International Transgender Day of Visibility, Idaho’s Republican Governor Brad Little signed HB 500 into law, banning transgender girls and women from competing in youth, high school and college sports consistent with their gender identity. The bill’s sponsors claimed its passing as a victory for women, Little himself stated he signed the bill to prevent girls from worrying about who they are competing against and, most recently, Utah Senator Mike Lee called the NCAA’s opposition to the ban “offensive” and “undermining” to cisgender women. In reality, though, this law hurts all women as it is patronizing, invasive and exclusive.

HB 500 does not support women. Instead, it plays into the cultural trope that women need to be protected and ignorantly labels trans women as other. Also known as the Fairness in Women’s Sports Act, this law only affects student athletes identifying as women. Based on statements made on social media by one of the bill’s sponsors, Representative Barbara Ehardt, it appears lawmakers made this decision deliberately, playing into the sexist assumption that trans men will never dominate in their sport and trans women will. Not only is this sentiment patronizing to cisgender women and trans men, but there is also no research suggesting trans women have an athletic advantage over cisgender women at any stage of their transition.

Less than a month after HB 500 was signed into law, the ACLU filed a federal lawsuit on behalf of two women claiming this law “threaten[s] to intrude upon the privacy and bodily autonomy of all women and girls engaged in student athletics.” The lead plaintiff, Lindsay Hecox, is a rising sophomore at Boise State University and has been speaking out against HB 500 since it was first introduced in Idaho’s legislature. As an aspiring collegiate runner and a trans woman, the impact of this law on Hecox is clear, but perhaps less evident is the impact HB 500 will have on the second plaintiff, a 17-year-old cisgender girl at Boise High School.

Known on court documents only as Jane Doe, this plaintiff joined ACLU’s lawsuit out of concern that a competitor may file a sex dispute to keep her from playing, citing her athletic build and more masculine demeanor. Since Idaho has not created a formal system for challenging a competitor’s sex, filing a dispute is as simple as contacting the student athlete’s school. If an athlete’s sex is disputed, the student must have their biological sex verified by a physical examination of their reproductive anatomy, genetic makeup or testosterone levels to be eligible to play. HB 500 weaponizes sex and gender such that any woman could be subjected to invasive exams because she is perceived to be too masculine or too good at her sport to be a “real” woman.

Both the NCAA and ICO have policies that allow trans women to compete on teams consistent with their gender identity, so HB 500 has made Idaho’s youth, high school and college teams more restrictive than any collegiate team outside of the state and the US Olympic team. This exclusiveness is completely unnecessary. According to Dr. Joshua Safer, “For a trans woman athlete who meets NCAA standards, there is no inherent reason why her physiological characteristics related to athletic performance should be treated differently from the physiological characteristics of a non-transgender woman.” Additionally, efforts to exclude subsets of girls from sports can undermine the benefits of participating in athletics, like higher self-esteem and psychological well-being, by creating a less supportive and inclusive environment.

Utahns like to make fun of Idaho, often treating the state like our country cousin, but it would not be surprising to see legislation similar to HB 500 emerge during Utah’s next legislative session or in Congress. Indeed, 20 bills were introduced nationwide in 2020 seeking to ban trans people from participating in athletics. This trend is frightening. Trans men and women belong on sports teams, and at least one study has shown that accepting transgender athletes in sports reduces stereotypes and discrimination in other areas. Moreover, it is evident that bans like HB 500 are harmful to every woman athlete. As Election Day draws nearer, it is important to research the platforms and values of those running for Utah’s legislature so we can elect officials who will ensure that if such legislation is introduced here, it will not pass.