Soter: Gen-Z Activists Should Treat COVID-19 Like the Human Rights Crisis It Is 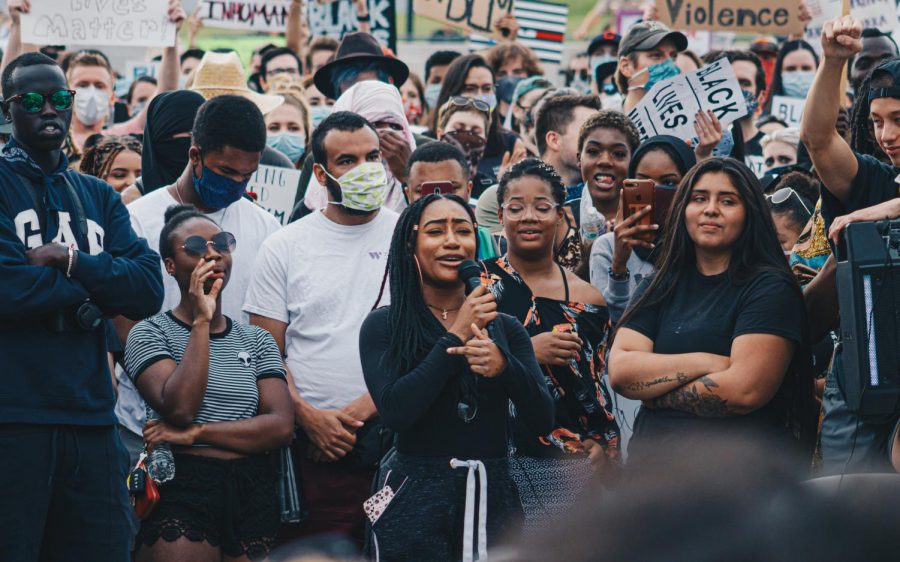 Protesters speak out against police corruption and violence during an open mic in front of the Utah State Capitol on June 5, 2020. (Photo by Mark Draper | The Daily Utah Chronicle)

Young people, especially those from Generation Z, seem to care a lot about their communities and the human rights issues within them. One in 10 college freshmen plan to participate in some type of activism during their college career if they haven’t participated already, and teenagers have been at the forefront of Black Lives Matter protests around the country since George Floyd’s murder on May 25. But there’s one major discrepancy in this trend — young people are one of the major contractors and spreaders of COVID-19 in Utah and elsewhere in the nation. Gen Z is perpetuating the pandemic instead of resisting it like the many other threats to human rights they have battled thus far. Young people need to tap into the compassion for humanity that we know they have and use it to stand up to the COVID-19 pandemic even if that might mean staying home.

Why is Gen Z not taking the pandemic more seriously? One possibility is that teens often have a mistaken sense of invincibility related to their psychological development. Because Gen Zers feel untouchable, they might not see any reason to uphold social distancing guidelines or mask-wearing regulations. The virus affects young adults as well as older people, yet they take no individual responsibility for it. A recent study found that 63% of young people don’t think their peers are taking COVID-19 seriously. As months of quarantine angst built up and the nice weather took hold, Gen Z has treated COVID-19 even more nonchalantly, and cases have surged because of it. By ignoring the problem, my Gen Z peers are just as dangerous to their communities as the right wing conservatives protesting school mask mandates in Utah County.

Despite their response to COVID-19, college-aged people believe strongly in their ability to change society by working together. Our generation has courageously chosen to stand up for some of the most pressing human rights issues in the world today. Student groups and teenagers like Emma Gonzalez and Greta Thunberg have led the way toward progressive change around problems from gun control to the climate crisis to reproductive injustice. But the pandemic has demonstrated that our impressive rap sheet doesn’t make us immune to hypocrisy.

It would be naïve to assume that every young person protesting, for Black Lives Matter for example, is doing so out of the goodness of their heart. While most young crusaders are probably sincerely motivated to make “good trouble,” as the late John Lewis put it, and bring about change, it’s only logical that there must be a subset of the group paying lip service to the cause as a means to get social media brownie points — or just participate in a social gathering after months of isolation.

All these factors raise an important question — do Gen Z members only support human rights issues that benefit them individually? Recently, someone I follow on social media began calling out people she had known in the past who had made verbally racist comments to her and then years later, in light of George Floyd’s death, began going to protests and publicly supporting the BLM movement. It’s sometimes hard to tell whether a person has really changed or just learned that supporting certain causes might benefit them from a social standpoint.

Unfortunately, due to the ineptitude of previous generations, the burden of solving human rights issues has fallen directly on our shoulders. And COVID-19 is a human rights problem — it has killed over 165,000 people in the US so far, especially Black and brown people, and shows no sign of relenting anytime soon.

Maybe Gen Z is speaking out about issues like police brutality while remaining silent about an equally threatening issue because we see COVID-19 merely as an inconvenient buzz-kill, and the impacts of police brutality and social inequity seem more concretely dangerous. Are we really that shallow? I hope not. For true change to take hold — for lives to be saved from the coronavirus as well as racist violence — we must be willing to pay the price even if that price is staying home next weekend.