Voting in 2020, An Unprecedented Election Year 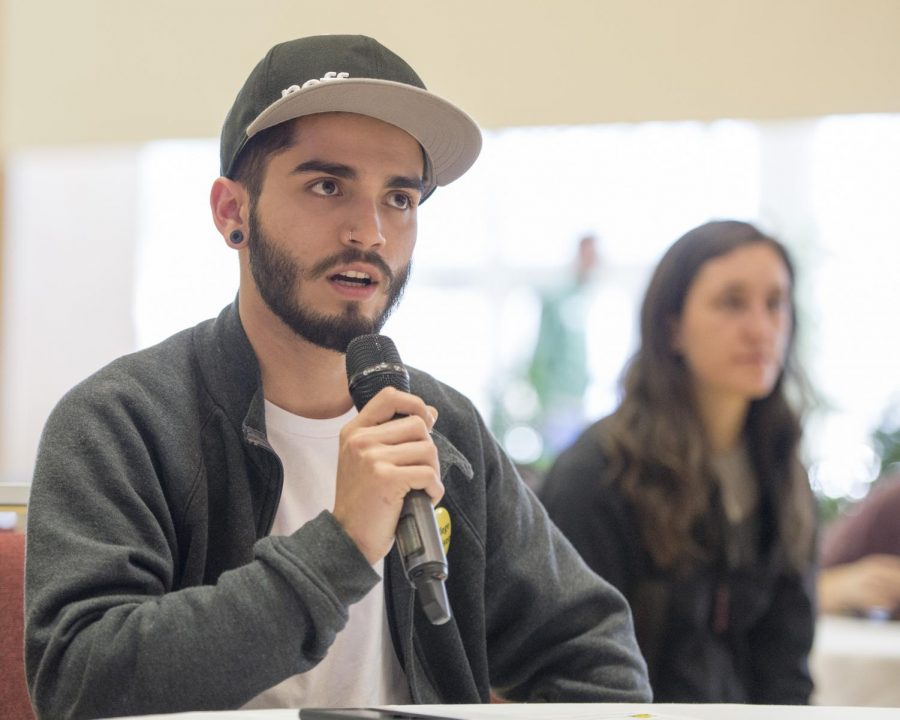 Jose Chacon, a junior in political science, asks a question while attending the University of Utah Prison Education Project talk in the Student Union Ballroom on Wednesday, April 5, 2017

By Kayleigh Silverstein and Natalie Colby

Donald Trump or Joe Biden is the choice many Americans are contemplating as election day in November approaches, and the year 2020, with many pivotal events and conversations, has changed the discourse surrounding the election.

COVID-19 has resulted in the death of hundreds of thousands of Americans, a tanking economy and a continuing discussion of how effective government structures protect its citizens.

The virus has also changed the way voting will happen in terms of access to the polls. Utah primaries in June took place entirely through mail-in ballots, and with COVID-19 cases continuing to rise, the system in the fall could be similar.

Geoffrey Allen, a University of Utah political science professor, said Utah has the mail-in ballot process down, but for other states, COVID-19 could drastically affect voter turnout and accessibility.

“For the Utah perspective, I expect it to not have a huge impact on things like turnout … the state has pretty good infrastructure for conducting safe elections,” Allen said. “In other places, there could be depressed turnout because people are less likely to show up because right now … there’s pretty good reason to believe that people will be scared and not wanna show up,” Allen said.

While it will affect voter turnout, Allen said it could be differential. Maybe older people are less likely to show up, and maybe younger people are scared and show up at a higher rate.

According to a study conducted by Tufts University, voter turnout in the 2018 national election among the group National Study of Learning, Voting, and Engagement students doubled that of 2014.

“I think voting is super important. There are a record number of people turning eighteen and thus being eligible to vote,” said Shaistah Din, a sophomore studying biology and health, society and policy.

The uptick in youth voting rates could be a reaction to increased tuition prices, which directly impacts students and their futures. When societal and political issues directly impact an individual or a group that individual belongs to, they may be more inclined to vote to make changes.

“I don’t think voting is the solution to all of our problems. However, having the people in office who match our values is a much-needed start,” Din said.

The death of George Floyd and the subsequent protests all across the nation have highlighted the systemic racism that exists within the United States. Amid protests in support of the Black Lives Matter movement, more young people and people of color are registering to vote. According to Color of Change, a nonprofit civil rights advocacy group, more people of color and students have been visiting their site to register to vote or update their registration since the protests began.

“There are so many societal or political issues that matter to me, I’m not quite sure where to begin. Access to free healthcare for all, raising the minimum wage, women’s reproductive rights, international affairs, etc. is what first comes to mind,” Din said.

Allen believes the main issues many college students and emerging adults will be concerned with are climate change and how COVID-19 has been handled.

Voting for the president goes beyond the name that appears on the ticket. It involves voting for the cabinet they will put in place, possible supreme court appointments, different executive organizations and executive actions.

“A lot of people don’t realize, the kind of scope of executive authority around environmental regulations around the Bureau of Land Management [have]. The administration has a lot of executive authority to kind of do what they think is right … It can have a lot of impact on your day-to-day existence where sometimes you might not think it does,” Allen said.

Local elections are also a core part of making a change in public policy, things like education, policing and public services. Many protests in Salt Lake City and city council meetings have discussed the budget, with two meetings exceeding 5 hours of citizen comments demanding the defunding of the police and funding for housing, education and public transportation.

“Those are largely provided at the city, county and state. And the people who make those decisions, oftentimes people who are elected … no one turns out,” Allen said, “if you really want to have your voice heard in those kinds of conversations. And that’s probably going to be how you change the dynamic in a lot of these conversations.”

Allen said electing politicians is about building a coalition of people who can make change happen. While electing one politician who may make promises, it is hard to fulfill them without people around to support legislation and actions. He said it can be discouraging to elect people who consistently fail to maintain campaign promises and initiatives, but people just have to keep voting.

“The only way you’re going to convince people that this movement is real is to continue showing up. Continue to vote, continue to seek people out in the streets, continue all of this pressure from different directions,” Allen said. “And that’s going to have an impact both on the kind of social pressure, but also on convincing elected officials that they need to behave in different ways,” Allen said.

According to the New York Times polling, both presidential candidates Biden and Trump might not be the ideal candidates who students voted for in the primary elections, but Allen still encourages people to vote in the fall.

“Students probably want to think about how they are going to feel if they don’t vote, and will they [be] really upset with the outcome?” Allen said.

Popular artist Kanye West may have also come on the radar for people’s vote in November, as he announced his run for president via Twitter on July 4, 2020. However, he missed the deadline for several large state ballots. Allen said he does not expect West to continue his campaign, but no matter what, people should vote on what the candidate advocates for over anything else.