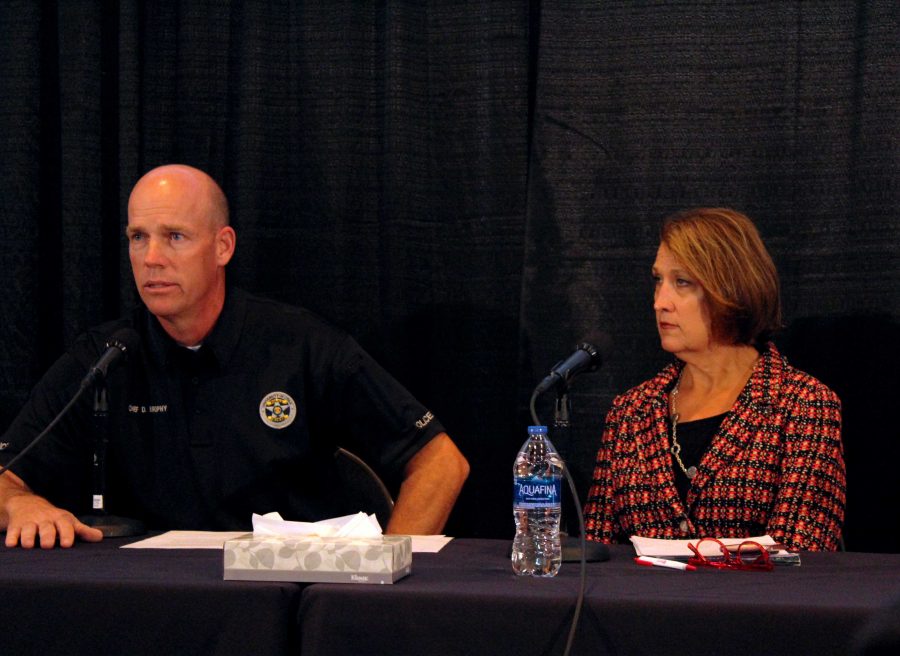 University of Utah President Ruth Watkins and University Police Chief Dale Brophy spoke at a press conference on the investigation into the death of student Lauren McCluskey on Oct. 25, 2018 | Chronicle archives.

During my junior year at the U, I had the opportunity to sit with our university’s recently appointed president, Dr. Ruth Watkins, while attending the Utah Day of the Girl. Watkins was honored at the event as a “girl champion” for her investment in girls and women throughout her career in education. I remember clapping as she walked to the stage to receive the award, unaware that less than two years later I would be calling for her resignation for failing to utilize her power as president to protect students.

The same day Watkins’ was honored for championing women, Lauren McCluskey reported Melvin Rowland to the University of Utah Police Department for the first time. Ten days later, she was murdered by Rowland. When investigating why the UUPD failed to protect McCluskey despite her multiple reports, independent investigators initially discovered ineptitude within the department and university. Additional investigations later revealed that the UUPD has mistreated female victims and mishandled their cases prior to McCluskey’s death.

While Watkins inherited this misogynistic and unresponsive police department, she chose to shield officers and the U from accountability by announcing McCluskey’s death may not have been preventable. Though it is impossible to know if the 30 public safety recommendations made by the independent review team would have saved McCluskey’s life, it is clear that officers’ inaction and misconduct at the very least did nothing to protect her. By refusing to discipline individuals for failures outlined in the independent report, Watkins treated McCluskey’s death as simply a learning opportunity for the university and excused university failings instead of addressing them.

After declaring McCluskey’s death unpreventable, the Watkins administration lost much of its credibility among students. This mistrust was only exasperated by the U’s motion to dismiss Jill and Matthew McCluskey’s lawsuit last fall claiming “there is no clearly established constitutional requirement that a University protect its students from … visitors to campus who are not under University control.” Student anger over this filing was immediate, the ASUU Assembly voted in support of a resolution rebuking the U and students protested in front of the Park building.

Instead of addressing raised concerns, the U’s general counsel dismissed these student leaders and gaslighted the student body, suggesting that if students took the time to read the motion, not just news articles, they would learn that the university does feel responsible for their safety. I did read the full document, and I agree the U believes its “officers had no obligation to protect McCluskey from her attacker.” This two-faced approach to addressing campus safety concerns not only alienates student stakeholders but also demonstrates that the Watkins administration values preserving the school’s image and financial integrity over its actual integrity.

When the Salt Lake Tribune initially reported that Officer Miguel Deras, a UUPD Officer, showed intimate photos of McCluskey obtained during the investigation to his co-workers, university spokesman Chris Nelson was quick to deny the allegations even as the University of Utah’s new police chief, Rodney Chatman, reopened the investigation. Since Utah’s Department of Public Safety confirmed the Tribune’s investigation and Chatman announced that three involved UUPD officers will be disciplined, Watkins herself has been conspicuously silent.

Perhaps with the pandemic, protests for Black lives and the presidential election dominating the news cycle, university leadership hoped students and community members would not notice the report. This damning report was Watkins’ last chance to change her administration’s legacy and stand up for students. As Deras’ revictimization of McCluskey and the continued revelation of systemic misogyny within UUPD was not enough to initiate an apology for officers’ behaviors, the department’s culture and the administration’s role to subvert accountability, any future apology made by Watkins now will seem politically motivated.

Watkins is no champion for women nor is she a champion for students. She is unfit to lead the university as she repeatedly failed to utilize her influence to protect students, and instead has focused her efforts to save face and insulate the U from accountability. For the campus community to heal, Watkins needs to resign, and the next president needs to prioritize systemic change to ensure the U is accountable for student safety.