Soter: Curiosity and Compassion Can Help Us Heal from Trump’s Polarizing Presidency 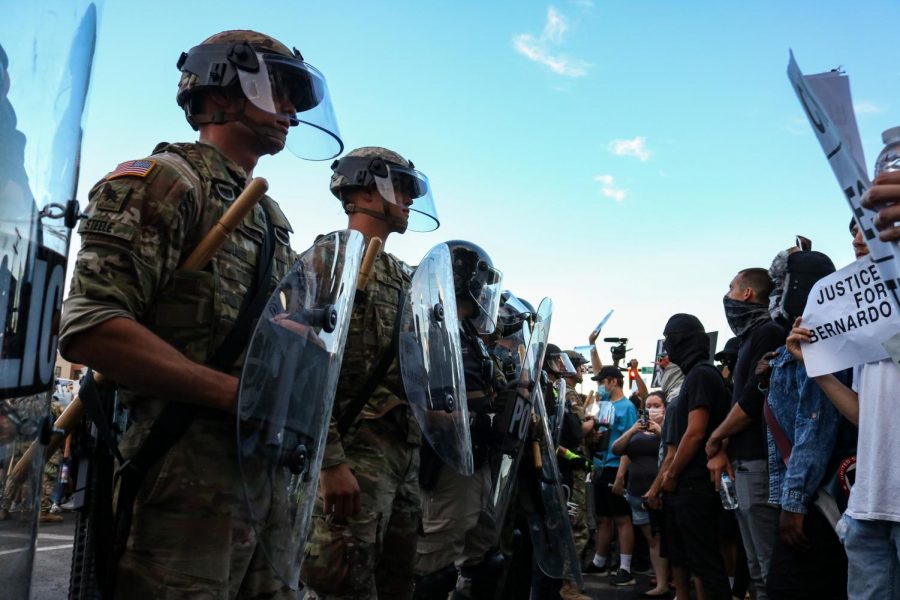 Protesters for the Black Lives Matter movement confront National Guard on 500 S. 200 East in Salt Lake City chanting "why are you in riot gear? I don't see no riot here!"(Photo by Ivana Martinez | The Daily Utah Chronicle)

I recently locked my keys inside my car. Within an hour, a man from AAA stood outside of my house, and I walked out with my mask on to tell him about my thoughtless mistake. He walked up to my car and noticed the Black Lives Matter sticker in the lower right-hand corner. “Who’s the activist in the family?” I responded, “Well I am, but I guess we all are,” and gestured to the sign with the same slogan on the front lawn. He questioned me again: “You know where the worst place for a Black person is?” I responded, “Where?” He answered without thinking twice. “Their mother’s womb. Those women abort by the thousands.”

I didn’t know what to say. I wanted to respond with statistics and point out that the reason BIPOC have disproportionately high abortion rates is because of social forces, like the racism he was displaying right then — but it was clear to me that he, like so many others, was not looking to have a constructive conversation. He was trying to be combative and add to the undeniable division between liberal and conservative Americans. So I bit my tongue. I nodded my head complacently, and spent days feeling guilty about it. Right now, when the country is so politically polarized, we must continue to speak our own opinions and listen to others with respect, openness and curiosity.

Since President Trump’s election in 2016, the country has become undeniably more divided than it was during the Obama administration. This is partly due to his extremist policy goals, like building a wall at the Mexican border and his flippant, often false tweets and statements. Thanks in large part to Trump’s questionable handling of COVID-19, it has become a political statement to adhere to science and wear a mask. And the president’s response to the Black Lives Matter movement has also been antagonistic and divisive, exacerbating tension in the country as some Americans side with Trump and some side with facts.

Division in American politics is nothing new, though. The Civil Rights Movement and Vietnam War protests split the nation in the 1960s and 1970s  and even then, issues around race and equity were centuries old. The problems polarizing us today are simply the manifestation of the inequitable systems, put in place in 1776 and even earlier, in which women are abused and mistreated, the deaths of Black, indigenous and people of color are minimized and only the rich are ever rewarded. The Trump administration has simply perpetuated these and other injustices, posing a fatal threat to democracy in the process.

So what can we do to mediate this division? We can continue to share our opinions openly and honestly — but in a respectful way. We can respond with curiosity and compassion when someone expresses a perspective we don’t understand. I should’ve asked the man from AAA why he said the things he did and shared what I knew rather than remained silent, or done what I was tempted to do and attack him in the same way. Maybe if we both had acted from a place of curiosity rather than our personal egos, we could have taught each other something. As George Eliot put it, “It is a narrow mind which cannot look at a subject from various points of view.” And isn’t narrow-mindedness really just a synonym for ignorance?

Open, compassionate dialogues critical not only to growing as individuals but to healing the country from the last four polarizing years of Trump’s presidency. And they’re possible when we approach others with humility and a genuine desire to understand, rather than a desire to be right.