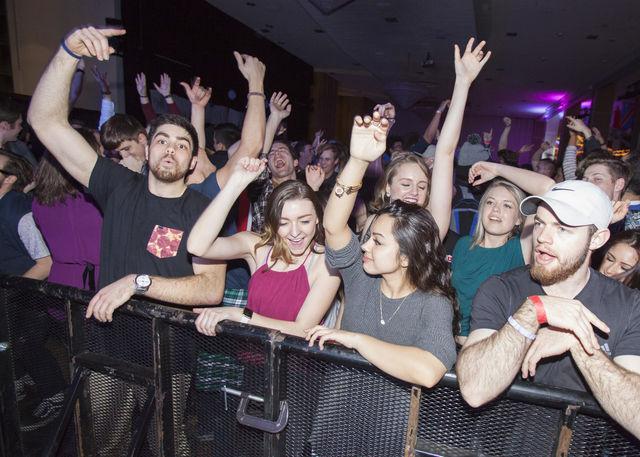 The University of Utah began hosting Crimson nights in 2003. Originally, the school held them monthly and opened them to the public. Similar to more recent Crimson Nights, the first ones offered music, activities, performers and free food to all those in attendance.

In 2008, the committee overseeing Crimson Nights changed the event from a monthly to a biannual occurrence, and it has remained that way ever since. They also closed the event to the public, keeping it open to Utah students and their guests only.

Since their founding in 2003, Crimson Nights have been a popular on-campus activity, even through its changes over the years. Last year, the event was a huge success for then-freshman, now sophomore, Elise Beller who had only positive comments about the experience.

“I don’t have a single complaint about Crimson Night. It really reminded me of a school dance — it was just like a mosh pit with dancing. And it was really fun… and sweaty,” Beller said.

Due to COVID-19 and social distancing measures, the event had to be altered from its usual format. While it took place fully online, the committee tried to maintain some normalcy by providing live music streams, a craft tutorial and bingo and trivia rooms.

In anticipation for the event, Beller commented it might not be as fun as last year. “There are just some things you can’t do virtually and this is one of them. But I give the university a lot of credit for trying,” Beller said.

Kayla Miller, a sophomore attendee of one of the Bingo rooms, outlined her personal experience with the event. “I went to bingo and I thought it was really cool how Swoop played alongside the other students. It was really well organized, and everyone was super interactive and talkative throughout the game,” Miller said.

Freshman Miranda Nicholson commented on the James Violet and The Kage Hughart Project live stream with praise for the two performers. “I have missed listening to live music so much, thank you for this! Your song choices and voice are incredible,” Nicholson said.

In past years, Crimson Night has served as a large social gathering for students. “We walked down from the dorms to the Union. And there were a ton of other people walking down there. I feel like it was just the thing everyone was doing,” Beller said.

The first Crimson Night of the year, which is historically the most popular, usually hosts around 1,500 students. Despite the event’s popularity in the past, the number of students in attendance on Friday was significantly less than it has been in past years. This year the total number of students who attended did not exceed 200.

According to Ben Chenot, the executive director of the Union Programming Council, one of the event’s goals is to provide students with an opportunity to socialize with their fellow students. Chenot attributes this massive drop in numbers to the online forum and accessibility of the event.

“The main reason for that I think is just the format when it’s an in-person thing it’s a lot more attractive an opportunity. When it’s virtual it’s harder to get the word out and it’s harder to make people remember it,” Chenot said.

Chenot did not feel it was a failure though.

“If there are students on campus that don’t have the opportunity to engage with other students or feel included on this campus through their own means, then we kind of provide those connection opportunities for them and give them the social resources they have to feel like this campus isn’t just like a place to do classes and study,” Chenot said. “So that’s our goal, and if we accomplish that for 10 people at an event, we still consider that a success.”

The Union Programming Council is working on more ways to market events to freshmen. They plan on working with the Resident Advisor Marketing team in order to broadcast future Crimson Nights and other events more fully.

“We really want to look out for them and what that might mean is trying to go into the new residence hall and really trying to engage in marketing there. We are trying to spark collaboration with the RAs, to kind of work with their marketing team and work on our marketing team and see how we can really effectively ensure that everyone in that new dorm is at least aware of this event, even if they don’t go to it,” Chenot said.

While COVID may limit events and opportunities, it also fosters innovation and new ideas. Friday’s Crimson Night was merely the tip of the iceberg in terms of the many activities the university will offer students throughout the course of this year.

“Our entire team is really optimistic about the year… We’re excited to see what new ideas and concepts we can come up with,” Chenot said.