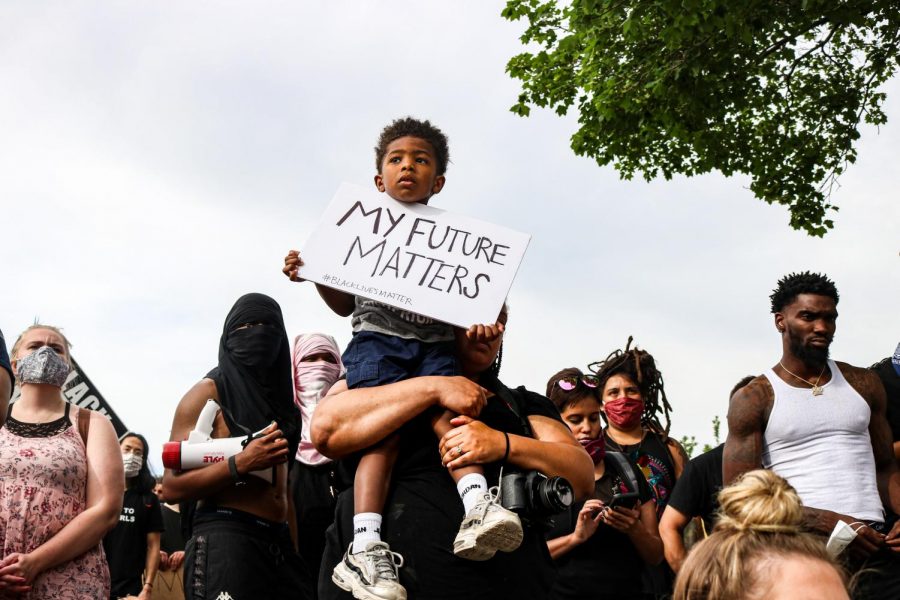 Julius Rowe Jr. and his mother Danielle Rowe at the Black Lives Matter Protest at the Utah Capitol in Salt Lake City on June 4, 2020. "He wanted to come and show his support and show that he is a little Black boy and he wants to have a future," Danielle Rowe said. (Ivana Martinez I Daily Utah Chronicle)

Utah’s largest police union, the Fraternal Order of Police, recently demanded that the Utah State Board of Education decry the “political indoctrination” of school children, citing an alleged incident where a teacher wore a Black Lives Matter shirt and disparaged law enforcement in front of her class. FOP further characterized all “anti-policing sentiment,” which appears to include any discussion of racial biases in policing, to be teacher-sponsored indoctrination. While an investigation led by Jordan School District found no district or state policies had been broken by teachers, FOP’s definition of indoctrination still needs to be definitively struck down by state leaders. Sharing facts that challenge students’ world views or their parents’ beliefs is not political indoctrination; it is education.

FOP is not alone in their efforts to characterize fact-based education as the brainwashing of proud, young Americans. Standing in front of Mount Rushmore on the Fourth of July, President Donald Trump depicted history classes as anti-American. “Our children are taught in school to hate their own country, and to believe that the men and women who built it were not heroes, but that were villains,” Trump said. The gathered crowd booed — a rallying chorus for leaders threatening schools over historically accurate curriculum adoption, for TV personalities misrepresenting BLM protests and for citizens continuing to equate American exceptionalism with patriotism.

In reality, what Trump has deemed “the radical view of American history” is simply a history class that is focused on more than just honoring historical figures. By asking students to consider our country’s origin and founders’ biases, we are inviting them to identify what still needs to be done to form a more perfect union. A similar curriculum is commonplace in Utah’s classrooms, where educators are required to teach students to think critically and adapt to new information. Sadly, when fulfilling this standard, some teachers experience pushback. My mother, a fifth-grade teacher, had a colleague accused of being unpatriotic for reading her class “George vs. George: The American Revolution as Seen from Both Sides.” Opposition to teaching material which contradicts cultural beliefs is not unexpected — research shows that most people would rather remain ignorant than face uncomfortable truths and perspectives — but state leaders who ask educators to teach critically must be willing to strongly defend the presentation of new, and sometimes uncomfortable, information.

In the era of fake news and alternative facts, the vilification of educators was inevitable, but it cannot be allowed to continue. When teachers are painted as propagandists, education is devalued along with the educated. According to Tom Nichols, author of “The Death of Expertise,” Americans who reject the advice of experts do it to assert autonomy and demonstrate their independence from “the educated elite.” But this so-called autonomy is costly. During the pandemic, Americans’ unwillingness to trust healthcare officials contributed to the United States’ unprecedented death toll. In Utah, around 20% of people do not wear masks in public despite evidence that this simple precaution is key to preventing the spread of COVID-19. Similar to the virus, ignoring experts has allowed misinformation about COVID-19 to spread. These inaccuracies are nearly impossible to address without societal faith in experts because “fact-checking” begins to rely on individuals’ feelings, emotions and personal experiences instead of actual evidence.

Allowing fact-based education to be depicted as political indoctrination will continue to hurt our community and country. While Sydnee Dickson, the State Superintendent of Public Instruction, has noted that current conflicts in our community can have a place in teachers’ curriculum, Dickson, the Utah State Board of Education and Gov. Gary Herbert need stronger language denouncing FOP’s claims. Such a statement from our state’s leaders would both affirm support for teachers and serve as an important reminder that facts are not debatable and cannot be ignored simply because they are uncomfortable.