Reese: Sorry Conservatives, the First Amendment Doesn’t Care about Your Feelings Either 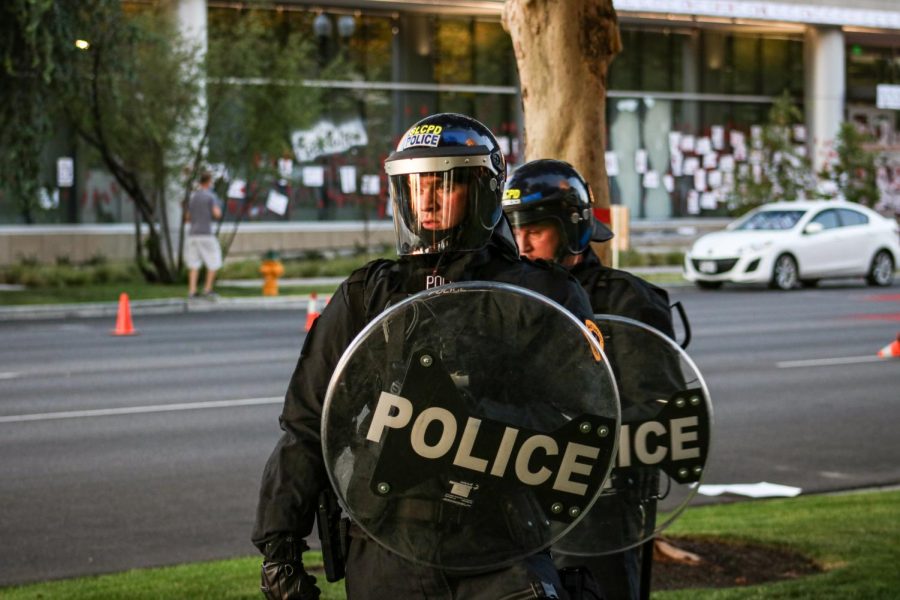 Police in riot gear surround and block in protesters in the streets of Salt Lake City on July 9, 2020. (Photo by Ivana Martinez | Daily Utah Chronicle)

In a recent cartoon for the Salt Lake Tribune, political cartoonist Pat Bagley called attention to the high number of white nationalists that occupy law enforcement roles in the United States. This cartoon brought a protest to the Salt Lake Tribune’s printing center organized by right-wing groups such as Utah Business Revival, an anti-mask group and Blue Line Unites Everyone, an anti-Black Lives Matter group. One Facebook page, Concerned Citizens of Utah, wrote that “[the Tribune needs] to stick to reporting, not publishing their personal beliefs” — apparently unaware that a political cartoon in the opinion section of a newspaper is supposed to convey an opinion that will evoke an emotional reaction in readers. Conservatives have often claimed to be the defenders of free speech, but their attack on Bagley’s First Amendment rights demonstrates their tendency to pick and choose which speech they will allow. Racists and political conservatives cannot arbitrate when the First Amendment matters just because someone disagrees with them.

Conservatives have often harped on their support of free speech, especially on college campuses. Well known conservative commentator Ben Shapiro has even made it central to his character, saying things like “facts don’t care about your feelings” to defend his anti-LGBT, anti-POC and anti-women rhetoric. Despite being seen as the face of the conservative free speech movement, Shapiro continues to police the opinions of those who oppose him. He picks and chooses who gets to express what opinions, much like the Bagley protesters hoped to accomplish with their demand that the Salt Lake Tribune take down Bagley’s cartoon. This demand disregards both the Tribune opinion section’s and Bagley’s rights, yet these protesters were allowed to exercise their First Amendment rights to express outrage over the September 1 illustration. This group only wants to hear voices that agree with their point of view.

Liberals and leftists also challenge conservatives’ speech, but for very different reasons and without trampling their First Amendment rights. Typically, conservatives face backlash for their words not because of disagreement over policy, but for saying sexist, racist, homophobic and discriminatory things. Arguments against conservatives’ language are typically not about whether they can say something but whether they should, relying on social norms to regulate speech. In my experience, conservatives often retort that freedom of speech warrants their comments and that liberals are being too “politically correct,” yet here they seem to believe their own sensitivity deserves to be accommodated.

I don’t think conservative Utahns are upset about Bagley’s cartoon, though. They’re upset because they still refuse to acknowledge that racism is deeply rooted in the United States, in Utah and in themselves — despite abundant evidence. Even Lt. Governor Spencer Cox has said that he has “not met a racist cop in this state,” totally disregarding reporting on racist police officers in Price and Murray. This remark, while disappointing, is unsurprising given that Cox had a former KKK member on his podcast, Cox & Friends, and still has yet to comment on his relationship with this individual.

On the flip side, Bagley’s cartoon is not hateful or problematic — it is based on well-sourced data and historical facts. It points out that many white nationalists and white supremacists have infiltrated law enforcement — a system of policing with origins in the slave patrols that would hunt down escaped slaves from southern plantations. Racism in law enforcement is well known. A 2019 investigation into hate groups on Facebook found that many police officers are members of misogynistic, Islamophobic or pro-Confederacy hate groups. In 2006, the Federal Bureau of Investigation released a report stating that white nationalists have infiltrated law enforcement to further their racist agenda.

Despite the facts behind Bagley’s cartoon, State Rep. Mike McKell and many other Utah Republicans attacked Bagley for his artwork on Twitter. Utah’s Department of Public Safety went so far as to issue a press release criticizing Bagley — apparently, the government can now use taxpayer money to attack the free press. While some of Utah’s elected officials may disagree with Bagley’s factual assessment, they should not attack him for voicing his opinion or ask him to retract or apologize for the cartoon. It is blatantly inappropriate that a public department would engage in criticizing the free press or an individual Utahn, especially given that Bagley was well within his constitutional rights.

The backlash that Bagley is receiving is outlandish. Asking him to apologize for something because it is upsetting is hypocritical of the conservative free speech argument we often hear on Twitter, in the media and in our classes from conservative peers. Neither conservatives nor liberals should be able to pick and choose how the Constitution and the rights it recognizes should apply to individuals. Importantly, it is not the opinion in the cartoon that is upsetting to conservative Utahns but its revelation of facts about law enforcement’s longstanding entanglement with white supremacy.