McGrath: Rep. Curtis, Can We Be Done Holding Your Party’s Hand on Climate Change? 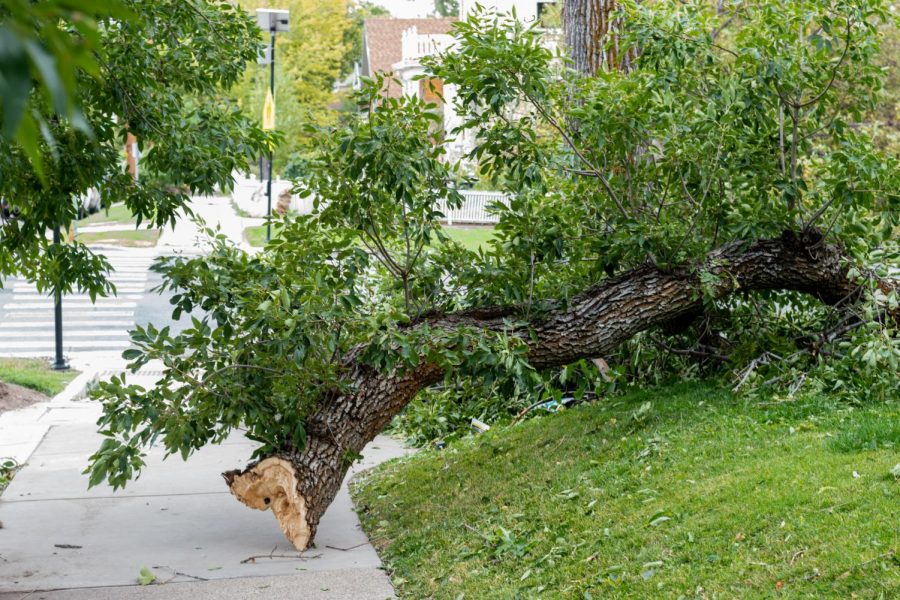 Fallen trees and other debris strewn across Salt Lake City's East Central neighborhood after a powerful windstorm on Tuesday, Sept. 8, 2020. Some streets are completely blocked and cars crushed. (Photo by Jack Gambassi | The Daily Utah Chronicle)

When Republican Representative John Curtis imagines a bipartisan response to climate change, he sees two previously bickering children dropping the politics and finally getting along — picking up trash and recycling their shared pop bottles and pizza box lids under sunshine and rainbows. He has made multiple comments regarding both parties’ approach to the climate crisis, essentially stating that Democrats need to drop the “extremism” while Republicans need only do the bare minimum: believe in science and climate change. He suggests that the left uses “science, shame and fear” when expressing concern, which turns Republicans off to the idea of acting to minimize the climate crisis. In tandem, the Republican senators that blocked and voted against the Green New Deal have accepted $55 million in donations from fossil fuel interests. I get it — tangible science and evidence would turn me off too if I was being paid millions of dollars to deny it.

Republican leaders can stop playing the part of the doe-eyed, confused child — they know climate change is happening, but they benefit from ignoring it. Don’t let the GOP persuade you that their inaction is because of their hostility toward the left. When protecting the environment from the climate catastrophe becomes as profitable as fossil fuels and big oil, the GOP will make changes.

It’s unacceptable that Republican leaders need to be bottle-fed scientific evidence and are willing to destroy the planet before losing a paycheck from fossil fuel lobbyists. Yet Rep. Curtis turns a blind eye to this blatant corruption in picturing a bipartisan path forward, asking Democrats to compromise and not use shame as a motivator for climate action, when Republicans’ behavior has been downright shameful.

In an August 24 webcast, Curtis painted a picture of a happy agreement by asking, “Can we all agree that less pollution is better than more? Less carbon in the air is better? Less plastic in the ocean is better? Cleaner water is better? Cleaner air is better? Can we agree that we shouldn’t waste resources and we should be more efficient?” He went on to describe the possibility of America’s blue and red children playing nicely in the sandbox. This imagery distracts us from how corrupt “climate deniers” are.

Republican leaders know climate change is real. The problem is that they don’t care as much about it as they do about their payout from fossil fuel companies. Nearly 80% of America’s energy comes from fossil fuels. These giant energy companies are the “leading sources of campaign financing” for Republican candidates and the leading sources of CO2 emissions worldwide. In fact, they account for 71% of global emissions — quite a large slice of the apocalyptic pie. By funding Republican campaigns and keeping the GOP in power, these corporations keep the disastrous use of coal, oil and gas as a main source of our energy — and continue to profit from it. Multinational fossil fuel companies have spent $1 billion to greenwash their image and be seen as climate allies, all while investing $110 billion in new fossil fuels.

Keep in mind that in addition to refusing climate-preserving policy measures, the Republican party wants less and “legal” immigration. What do they expect to do with the billion climate refugees expected by 2050? The GOP doesn’t believe in “government handouts” or aid for its constituents. What will they do when we experience major food shortages because of climate change, causing us to starve? And of course, the party doesn’t believe in (or admit to) climate science. What about the abnormal wildfires, hurricanes and rising heat taking American lives right now, or even the freak windstorm that recently tore through Salt Lake City? We can’t accept Republican leaders’ refusal to act on this issue. The stakes are too high.

Republicans have argued that the Democratic Party’s choice to frame this situation as a “crisis” is a way of weaponizing fear and shame, all while receiving personal checks from oil, gas and coal companies. Their hypocrisy and lack of concern for human life couldn’t be clearer. They are trying every tactic to keep their funds coming, and quite literally watching the world burn. Last year, Republican Senator John Barrasso commented that the Green New Deal would lead to the government taking “control of our lives,” as if big oil doesn’t control our lives and futures by lobbying these politicians.

Republican officials expect fossil fuel lobbyists to keep them in power using funds from dirty energy sources. This election, we need to show them the power of our votes. Curtis thinks that if both sides would focus on making changes instead of “worrying about the politics behind climate change, it would lead to steady improvements.” He’s right. The problem here is the politics that keep the US dependent on fossil fuels. It is too late to worry about Republicans’ feelings of “shame” or wait for them to care about the climate and the environment. Like anything else we care about, sticking to your Republican values will be impossible with a climate genocide. Listen to Curtis: drop the politics by voting for change and action, not the GOP.