Fall Break Cancelled at the U, Students React 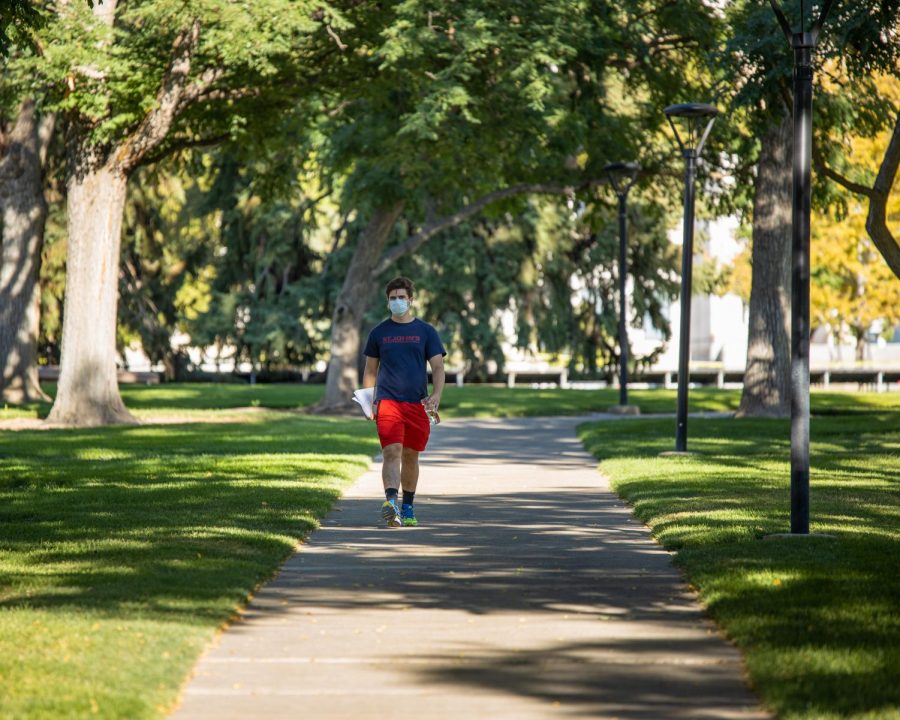 Students at the University of Utah are following the COVID-19 guidelines by wearing masks while working on campus. (Photo by Abu Asib | The Daily Utah Chronicle)

COVID-19 has altered how people interact, students learn, and adults work, and society has had to adjust accordingly. Before this year, it was uncommon to see people wearing masks. Now Salt Lake has a city mask mandate, and the University of Utah’s annual fall break at the beginning of Oct. has been canceled.

The University of Utah announced its first change to the fall break dates because of the Vice Presidential Debate being held in Kingsbury Hall on Oct. 7. This decision was made to allow more students to be able to volunteer and intern at the event. However, the arrival of a worldwide pandemic made it necessary to alter the calendar once more.

On June 1, the U canceled fall break entirely in an attempt to control student travels to and from campus. Professors will continue to teach courses through what would have been fall break, but rather than having any of those in-person, they will all be online from Sept. 28- Oct. 9.

This is similar to other schools in the state of Utah, including Utah State University and Westminster College, who canceled their fall break as well. These schools, like the U, will only offer classes online after Thanksgiving.

The U has repeatedly stated its top priority is the health of students and staff, citing that as the reason the university decided to cancel fall break and end in-person classes after Thanksgiving.

Students Camille Breiholz and Thomas Wilson said they think the university is doing its best.

“I think they’re trying to set an example for the students because they’re canceling a lot of on-campus events and encouraging students to take it more seriously. I guess the university itself is doing well because there’s the hand sanitizer in all the classes and the in-person classes are small,” Breiholz said.

However, they have doubts as to whether the U’s efforts will make a difference in the spread of Covid-19  across campus.

“When you put classes online for two weeks, I feel like it almost encourages people to travel because they have no obligation to be on campus. And telling kids not to go anywhere is not going to actually make them not go anywhere,” Breiholz said.

While neither Breiholz nor Wilson had set plans for fall break, they had each hoped to travel out of the state.

“I kind of wanted to go to Yosemite in California with a group. But I didn’t have any definite plans. I feel like during this time with COVID and everything it’s kind of difficult to make long-term plans anyway,” said Wilson.

“It’s hard because I don’t think COVID is spreading while we are on campus in class. It is spreading because kids are going to parties. And the University can’t really control that,” Breiholz said.

“I don’t know if the university could do this, but I think if there is one area that they can improve is like controlling off-campus events. I think that that’s where most of the numbers are coming from,” Wilson said.

Despite not having set plans, both Breiholz and Wilson expressed disappointment at the thought of not having a break from school. Breiholz said the University is robbing students of a necessary break from the rigors of a full class schedule.

“16 straight weeks of school is a long time. And it’s important to take time to decompress,” Breiholz said.