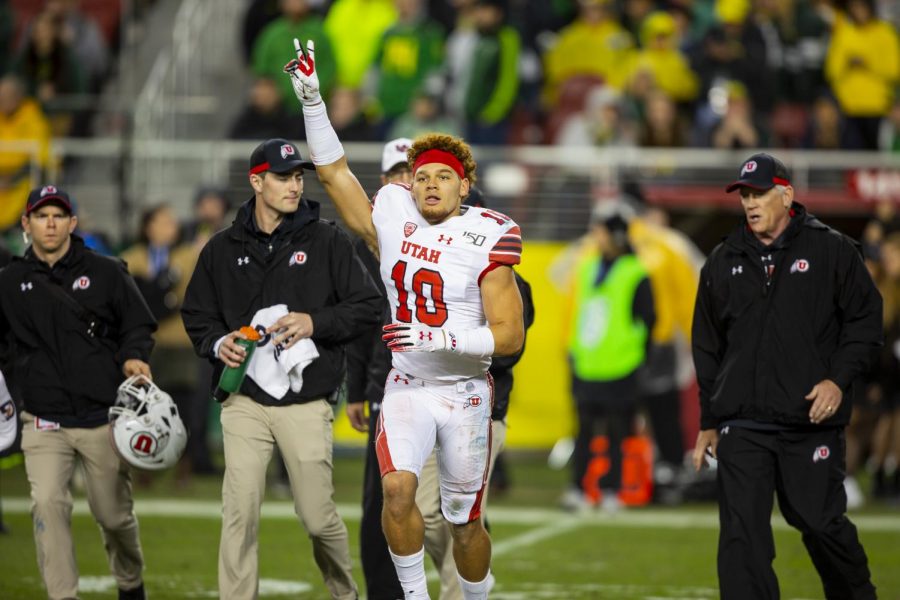 University of Utah sophomore defensive back R.J. Hubert (10) signaling an ok to the Utah side of the stadium after stopping the clock for an injury in the Pac-12 Championship Game vs. University of Oregon at Levi's Stadium in Santa Clara, CA on Friday, Dec. 6, 2019.(Photo by Curtis Lin | Daily Utah Chronicle)

According to the PSAC website, this committee is focused on “assisting the chief safety officer with the development of the strategic direction of the department in order to enhance the safety and overall quality of life for the U community. The committee will offer advice and constructive criticism to the CSO and will assist in educating the U community about programs, services and initiatives offered by the department.”

“We are pleased to have Cristal Isa and R.J. Hubert appointed to the Public Safety Advisory Committee, and extend our thanks to Marlon Lynch for including student-athlete representation on this important committee,” said Director of Athletics Mark Harlan in a press release.

The pair will be the faces of the athletic department on the council.

“R.J. and Cristal will represent their fellow student-athletes and classmates while serving on the PSAC to further enhance the safety and overall quality of life in the community. Our student-athletes have all the necessary leadership qualities to make valuable contributions to the committee and will continue to make everlasting impacts on our campus community,” Harlan said.

The committee also includes faculty, staff and students from a diverse array of departments across the university with the goal of making the university a safer place where students can live and learn.

Isa and Hubert are no slouches when it comes to academic and athletic accomplishments.

Isa — a junior from Henderson, Nevada — earned All-American honors last season with the Red Rocks. Her specialties include the uneven bars and the balance beam, and Isa put up an impressive 9.925 and 9.95, respectively, on each event on her way to winning first-team All-Pac-12 honors on both events. Isa is pursuing a degree in computer engineering, and as a stellar student, she earned her spot on the Pac-12 Winter Academics Honor Role last year. Her resume gets more impressive — Isa is also involved with Crimson Council and the UTAH group, along with several other extracurricular engagements.

Hubert — a junior from Longdale, Nevada — was an integral part of Utah Football’s 2020 Pac-12 South title. Hubert played in 13 games in 2019 — including three starts. Hubert posted a career high with seven tackles in last year’s game against Washington State, but Hubert’s highlight of the season was when he forced a fumble in the Utes’ key road comeback of 2019 against Washington. Last year, Hubert earned a spot on the Pac-12 Fall Honor Roll. Hubert, a communications major, has been on the AD Honor Roll four times and the Dean’s List three times while also volunteering as a part of the Ute Academy while participating in job shadows, workshops and network nights.

On the PSAC website, the most important functions of the committee include considering initiatives to make the campus a safer place to attend and becoming more knowledgeable and educating others on pertinent public safety topics. PSAC aims to “create greater awareness among key stakeholders about the ways in which the department works to protect the safety of the university, specifically people, property and reputation.”