Burton: Activists and Religious Groups Should Be Allies, Not Opponents 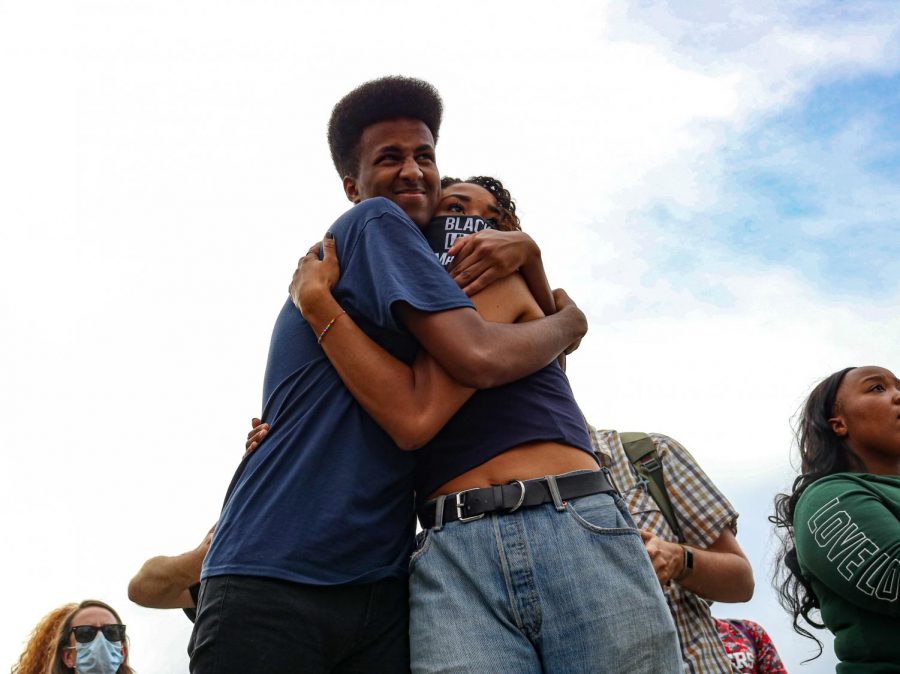 Speakers Daud Mumin and Abena BakenRa have a moment after speaking at the Black Lives Matter Protest held at the Utah Capitol in Salt Lake City on June 4, 2020. (Ivana Martinez | Daily Utah Chronicle)

With protests over police brutality and discrimination still in full swing, hundreds of protestors are taking to the streets. Despite the universal ideas championed by these protestors — namely fighting racism against Black, Indigenous and people of color — reception to these protests is split. Some praise the protest efforts and others deride it. Both proponents and critics of the growing Black Lives Matter movement compare and contrast it with the Civil Rights Movement of the 1950s and 1960s. A key difference noted is the lack of engagement from religious institutions in today’s movement. Whereas the Civil Rights Movements was very religious, with churches being important community centers for Black Americans, today there is a decreased number of religious participants in current protests. Some activist organizations cite grievances against religious people’s lack of activism. But before we can make progress on including churches in social justice movements, we have to consider the reasons behind this phenomenon.
Red vs. Blue
It is very apparent that ongoing protests against racism have brought out strong political divisions among different demographics. Though these contending groups may agree on the concept of racial justice, they simply cannot align on adjacent policy issues and beliefs, which has led to a deadlock. Black Lives Matter, for example, carries considerable partisan associations. Conservatives frequently refer to BLM as a “Marxist” organization. BLM’s list of beliefs can be read as implying that they lean toward this persuasion, and Black Lives Matter has been propped up by left-leaning funders. In reality, it is hard to tell whether or not BLM is a definitively leftist organization since it is comprised of so many people of different beliefs. But the leftist association is there, and this alienates religious organizations that lean right.

On the other side of the coin, conservative religious organizations have several negative associations attached to them. Evangelical Christians have an undeniable connection to Donald Trump. Others, such as The Church of Jesus Christ of Latter-day Saints, are closely tied to the GOP because of stances on abortion, LGBT+ rights and other issues — though they aren’t necessarily fans of the president. All these organizations have beliefs in common regarding racial justice, but because of their associations, they end up in conflict with each other.
What Is Racism to These Groups?
Yet there is one point of contention that is actually quite critical — conservative religious types and mainstream activists don’t quite agree on what constitutes racism. A more conservative religious person may consider racism to be “a belief that race is a fundamental determinant of human traits and capacities and that racial differences produce an inherent superiority of a particular race.” This definition frames racism as a conscious individual choice. On the other hand, mainstream activists focus on racism in a more hierarchical and institutional way, where racial discrimination is subtler and less top-of-mind. On the flip side, anti-racism means to look and fight beyond how individuals treat people of different races and actually confront institutions. Under these definitions, a white, conservative, religious person may consider themselves not racist, and in terms of individual racism, they may not seem problematic. But they can still be considered racist given their inaction in dismantling racist policies. Understandably, when a person like this is criticized for being racist, they might be irritated or even angered because they don’t share their critic’s definition of racism. Given this distinction, it is difficult to imagine how religious groups and activists could meaningfully collaborate to address racism.
Bridging the Divide
So how do we make progress toward racial justice and engage those different from us as partners in that process? In order to overcome the divide between churches and activists, people need to overcome their polarized views of opposing groups. On top of electoral changes, individuals can bridge gaps as well. Each of us has a responsibility to break down the stereotypes we believe about the other side, just as we have to check our racial biases. For example, we should not assume that a BLM activist is a Marxist anarchist, or that an Evangelical Christian is an ignorant and callous racist. Once we tear down these prejudicial assumptions, divided groups can start actually communicating with each other — not with the intent to debate, but to have a productive dialogue. The labels we arbitrarily give each other will become less and less meaningful as we engage in these conversations.

As I was writing this article, I continually thought of a project by my favorite musician, Gabriel Kahane. A leftist of the social democratic leaning, he embarked on a cross country Amtrak trip soon after the November 2016 election. His intent was to divorce himself from social media and engage with strangers in the cars, some of whom held views very different from his own. Through the songs he has written based on his trip, Kahane discovered the healing power of interpersonal dialogue. This experience showcases a pertinent lesson that applies to church organizations and activists as well. They should not be opponents, but allies in the making against the universal evil of racism.