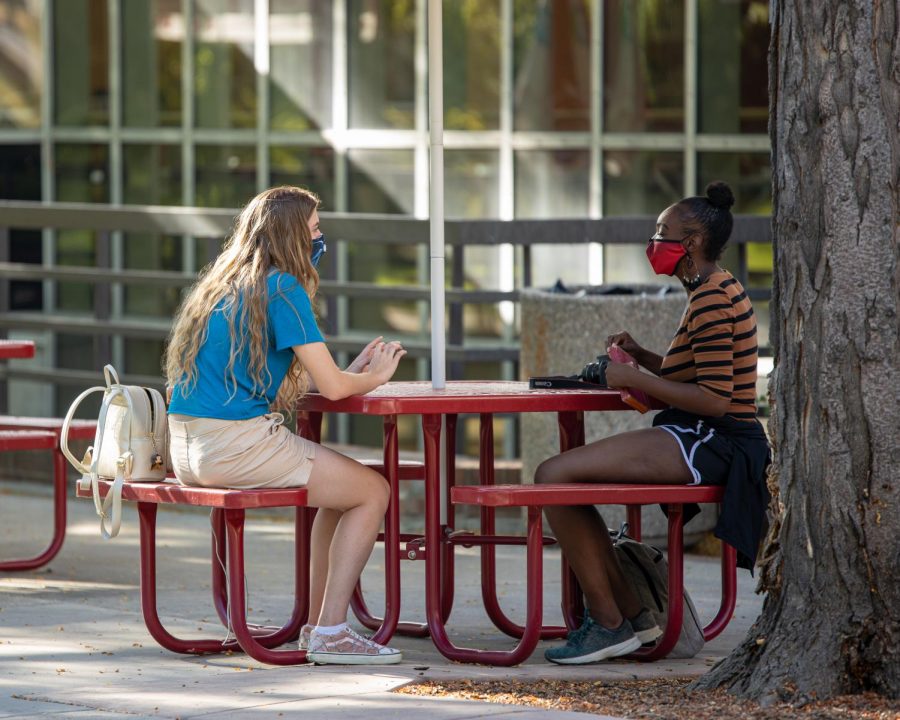 Students at the University of Utah are following the COVID-19 guidelines by wearing masks while working on campus. (Photo by Abu Asib | The Daily Utah Chronicle)

Universities all over the nation — from Alabama to New York to Iowa — have experienced dramatic spikes in COVID-19 cases since fall semester began. According to a New York Times survey, colleges and universities have reported over 88,000 cases, with 61,000 of those coming in late August. University officials often blame these numbers on students’ selfishness and lack of personal responsibility.

“Do you really want to be the reason that Tulane and New Orleans have to shut down again?” scolded the Dean of Tulane University in an email addressing the “indefensible and truly shameful behavior” of student partygoers. Similarly, a Cornell University Vice President berated students in a letter after a cluster of COVID-19 cases on campus. However, public health experts disagree with administrators, instead of placing the blame on universities’ inadequate testing and unrealistic expectations for students. “A lot of school administrators are blaming their students for their failure of their own public-health plan, which I think is unconscionable,” Julia Marcus, an epidemiologist at Harvard Medical School, said to NBC News.

As a freshman this year, I’ve seen students acting like they’re immune to the pandemic: partying, not wearing a mask, being less than 6-feet apart and so on. I can understand the appeal of attributing these spikes to young adults — it’s easy, and fits the narrative that we’re all irresponsible, risky and selfish. However, when administrators decided to reopen campuses this fall semester, they essentially guaranteed a safe environment for students and faculty. College students shouldn’t bear the sole responsibility of keeping campuses safe during the COVID-19 pandemic; it’s also up to universities to safely accommodate us and enforce realistic standards.

Researchers have found that only 27% of US universities required testing for undergraduates arriving on campus this fall, and only about a fifth planned to test students on a regular basis. So it’s unsurprising that colleges’ COVID-19 mitigation strategies haven’t sufficiently addressed typical student behavior. It doesn’t take a health expert to realize that sending students back to school under inadequate conditions and after months of social isolation was a mission doomed to fail. In fact, administrators were warned prior to the semester that college-aged people were less likely to follow virus-combatting measures than other demographics. And even with the CDC’s questionable recommendation against entry-testing, university officials should’ve known the risks of reopening and developed substantive strategies to prevent campus outbreaks.

Likewise, the government should be held responsible for its failure to appropriately respond to the pandemic. Thanks to poor federal leadership, universities don’t have the funding to provide adequate testing — outbreak control would mandate students to be tested every two to three days — and are left to fend for themselves with minimal resources. On top of that, local governments’ decisions to open their economies prematurely has allowed young people to be exposed to high-risk environments. Given that the majority of retail and restaurant workers are young adults, it makes sense that rapid outbreaks have occurred within my age group.

Now, this is not to absolve my peers of basic responsibility. We still have our part to play, and partying in large groups shouldn’t be condoned. However, shuns and threats will not stop students from rebelling nor will it compensate for nation-wide failures. Joshua Salomon, director of Stanford University’s Prevention Policy Modeling Lab, has argued the opposite: that shaming will reduce the likelihood that students will “cooperate with testing or contact tracing efforts.” Empathy goes a long way, and high rates of anxiety and depression were already prevalent among college students even before the pandemic. Now add social isolation, loss of income and instability into the mix.

University officials need to consider other safe alternatives for social interaction while strictly enforcing rules. One way to lessen outbreaks among students is to implement a harm-reduction approach across campuses. Accommodating more in-person, socially-distanced outdoor events will make students less inclined to go against unrealistic expectations. This strategy would be much more effective than schools’ current “all or nothing” methods, similar to how abstinence-only education doesn’t prevent teen pregnancies — teaching students about safe sex and contraception does. This more flexible approach will give options for socially deprived students to participate in safe, in-person events rather than going straight to risky activities that aren’t moderated, such as casual partying.

Meanwhile, administrators need to motivate students around the goal of returning to normal. We know it’s not an ideal school year, but rallying us together with positive messages will go a long way. Personally, the hope of being able to attend indoor concerts, go to dances and travel freely again is ultimately what’s driving me to follow health and safety measures through this uncertain school year.

Blaming and shoving responsibility onto college students won’t make up for the lack of accountability from universities. If administrators couldn’t provide a safe environment for students while also enforcing practical rules, then they had no business reopening in the first place.