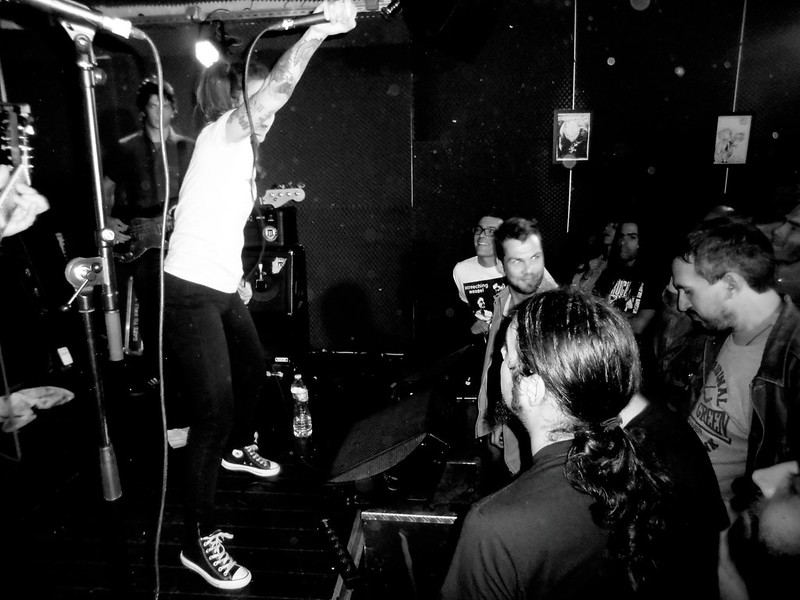 California indie-rock band The Neighbourhood has ushered in a new era with the release of their latest album “Chip Chrome & The Mono-Tones.” The band first teased the album back in August of 2019 with the single “Middle of Somewhere.” Now, over a year later, the highly anticipated album is finally here in all its silver, chrome fashion.

Formed in Newbury Park, California, in 2011, The Neighbourhood consists of frontman Jesse Rutherford, guitarists Jeremy Freedman and Zach Abels, bassist Michael Margott and drummer Brandon Fried. The band broke through onto the mainstream scene in 2012 with the release of their EP “I’m Sorry…”, featuring the hit single “Sweater Weather.” Mixing moody hip-hop, ‘90s alt-rock and electronic elements, their genre-fusing music garnered a massive teenage fanbase at the beginning of the Tumblr era.

Since the release of  “I’m Sorry…,” the band has released three albums titled “I Love You.,” “Wiped Out!” and “The Neighbourhood.” “Chip Chrome & The Mono-Tones” marks The Neighbourhood’s fourth studio album. With each album, The Neighbourhood has grown, shown their range and become more comfortable with their experimental sound. This new album is their most experimental and conceptual work to date.
“Chip Chrome & The Mono-Tones”
Inspired by David Bowie’s persona “Ziggy Stardust,” frontman Jesse Rutherford spent three years developing and conceptualizing his silver-clad, spandex-wearing persona known as “Chip Chrome.” While developing this persona and the album, Rutherford took a break from social media and the internet for almost nine months. It was in this isolation that “Chip Chrome & The Mono-Tones” was born — a modern, yet futuristic twist on Rutherford’s life experiences. In drawing inspiration from Bowie, Rutherford told Apple Music, “Bowie was Ziggy, and Ziggy was a character very addicted to cocaine — and I would say that Chip is addicted to the internet, a product of addiction from social media for so many years.”

Spanning 11 tracks and clocking in at just 32 minutes, “Chip Chrome & The Mono-Tones” is The Neighbourhood’s most cohesive, self-realized album yet — and my personal favorite. “I wanted to speak in a different way with music,” said Rutherford in an interview with Variance Magazine. “At the end of the day, I’ve been trying to figure out what it really means. Sometimes, it’s hard for me to put it into words — even though it’s supposed to be my job with the lyrics. Chip helped me find that voice. He’s the best leader I could be for this project, for the boys and for my friends.”

Further explaining the project, he continued, “The Mono-Tones are the voices in my head that are always there. They can be a bit haunting and keep me up at night, but I trust their taste. In the same way I want to make the guys happy, I want to make the fans happy. To do that, I shut everything out, sat alone, found what makes me happy, and discovered my voice. The funny thing is it takes the piss out of being so serious. I don’t want to be brooding. A lot of these songs are based on major chords, so it might be a happier version of The Neighbourhood.”
Tracklist
Opening with “Chip Chrome,” a futuristic, electronic track, the tale of Chrome falling to Earth begins. Next, the album transitions into “Pretty Boy,” a tender love song reflecting on the importance of having a significant other, set to a psychedelic rock track. It’s in the music video where listeners encounter the first sighting of Chrome as he wanders through Los Angeles with his silver guitar in hand, struggling as an artist.

Chrome makes his second appearance in the “Lost in Translation” music video, where the band performs the song in a futuristic TV set-up inside a disco ball. This happy, funky pop track is offset by introspective lyrics hinting at communication problems between Chrome and his partner. He sings, “I’ve been gettin’ lost in translation / Trouble keepin’ up communication / We were havin’ fun, now I can’t wait to be done / Feels like I’m the only one that’s sick of playin’.”

The majority of the tracks on “Chip Chrome & The Mono-Tones” offer insight into The Neighbourhood’s rise to fame and Rutherford’s personal struggles. The alt-rock track “Devil’s Advocate” finds Rutherford singing about fame and slowing down. “It’s about getting back to being a simple man rather than trying to chase a designer brand,” he said. “I’m attracted to designer stuff, diamonds and the good life, but there’s nothing like finding greatness in the simple things.” Themes of slowing down and taking time to reconnect as a band is further explored on “Tobacco Sunburst,” an acoustic heavy, western track.

Rutherford’s personal struggles and insecurities are put on full display on “Cherry Flavoured,” “BooHoo” and “Middle of Somewhere.” “Cherry Flavoured” finds Rutherford tackling his drug use, singing, “I’ve been getting high / It’s keeping me low now / I’m doing it alone now / I think I gotta slow down.” “BooHoo” sees Rutherford learn how to be a partner.

In describing the track, Rutherford said, “It’s me dealing with my insecurities in my relationship with my girlfriend, who’s very popular. I was kind of like the main character before she came into my life.” He added, “I had to learn how to be a co-star, and that was, for me personally, a thing I had to learn. It’s a team.”
Verdict
“Chip Chrome & The Mono-Tones” has become one of my favorite album releases of 2020 overnight. The futuristic, sci-fi concept behind the album makes it a cinematic listening experience. The Neighbourhood maintains their melancholic, sad-boy vibes injected with glittery synths fans first fell in love with while entering into a new era of experimentation.