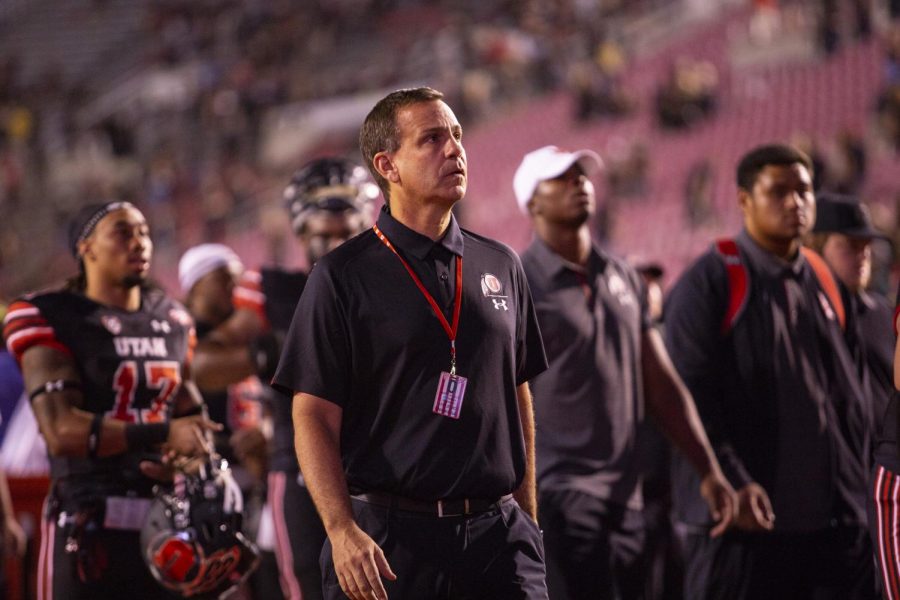 University of Utah Athletic Director Mark Harlan walks into the locker room with the University of Utah Football team after a 21-7 loss against the Washington Huskies at Rice Eccles Stadium in Salt Lake City, Utah on Sat. Sept. 15, 2018.(Photo by: Justin Prather | The Utah Chronicle).

After a joyous day for the Pac-12 yesterday, University of Utah Athletic Director Mark Harlan addressed the media on Friday about the conference’s announcement on return to play as well as what the athletic department went through.

Harlan said in the conference that delivering the news about the return to play was one of the best moments of his career.

With the announcement of the return to play, people are wondering if the Pac-12 should be eligible for the College Football Playoff given that they are scheduled to play fewer games than others.

“We might have scheduled fewer games but it doesn’t mean we will be playing fewer,” Harlan said. Harlan addressed teams like Houston who have been scheduled to play games for weeks but have yet to see the field. “We go into this eyes wide open, knowing that we hope to get all those games in just like any other conference. I do believe that if we have a particularly strong team, whether that’s an undefeated team or a maybe one loss type team that wins our conference the way our schedule is laid out, I think they should absolutely be considered [for the College Football Playoff].”

The furloughs that have been in effect for the department will still be in place according to Harlan but some dates will be shifted depending on how involved the staff member is with football operations.

Harlan also addressed the locker room situation at Rice-Eccles Stadium since the south end zone which held both locker rooms is no longer standing.

“I’ll start with a text from a fellow AD, who said if you put up a tent it will be better than the previous locker rooms,” Harlan said.

He also stated that they might have extend halftime to accommodate players walking to a temporary locker room.

In regards to scheduling, Utah will maintain the originally scheduled in-division home games of Arizona, USC and a division crossover game that is yet to be determined. In addition, they will travel to Colorado, UCLA and Arizona State. Harlan stated that the final schedule for the season should come out next week sometime.

All three coaches who have been given the green light for their sport to resume come November are ready to get to work with their teams.

“Our players have done a great job staying focused over the course of the past several months and have worked extremely hard through all of the uncertainty,” head football coach Kyle Whittingham said in the statement. “We’re excited that we’ve been given the go-ahead to play football this fall and look forward to getting the season underway.”

Harlan stated that fall camp for Utah should open either on Oct. 9 or 10 but the final decision will be up to Whittingham.

Both Utah basketball coaches have been in less of a limbo spot than Whittingham as well as the other fall sports coaches but are still ready for the season to tip off.

“With all of the unknowns student-athletes from around the country have faced this year, it is exciting to officially be one step closer to our team getting to compete in the sport they love. I have been really impressed with our team and how they have managed this situation,” women’s basketball coach Lynne Roberts said in a statement. “I know they are chomping at the bit to compete again, and we can’t wait to get the season started. We will continue to work with our university and the Pac-12 to ensure the health and safety of our student-athletes as we continue to move forward together.”

On the men’s basketball side of things, even though the team has been working out since school has resumed, they are ready to see some game action.

“It’s a big day for our basketball program, fans and league as a whole. Our team has been working tirelessly at home during this whole pandemic and I couldn’t be more proud of the hard work they’ve put in. It’s been great having them back on campus together and getting them connected for the upcoming season,” men’s basketball coach Larry Krystkowiak said in the joint statement with Whittingham and Roberts. “There hasn’t been a lot of good news since this whole thing started back in March, so this is definitely a win for everyone involved. I know the staff and our players are thrilled and eager to hit the court full swing and get ready for the upcoming season. There is still a lot of work to be done until then, but we’re just happy as everyone else in our conference to know we’ll be playing some basketball come Nov. 25.”