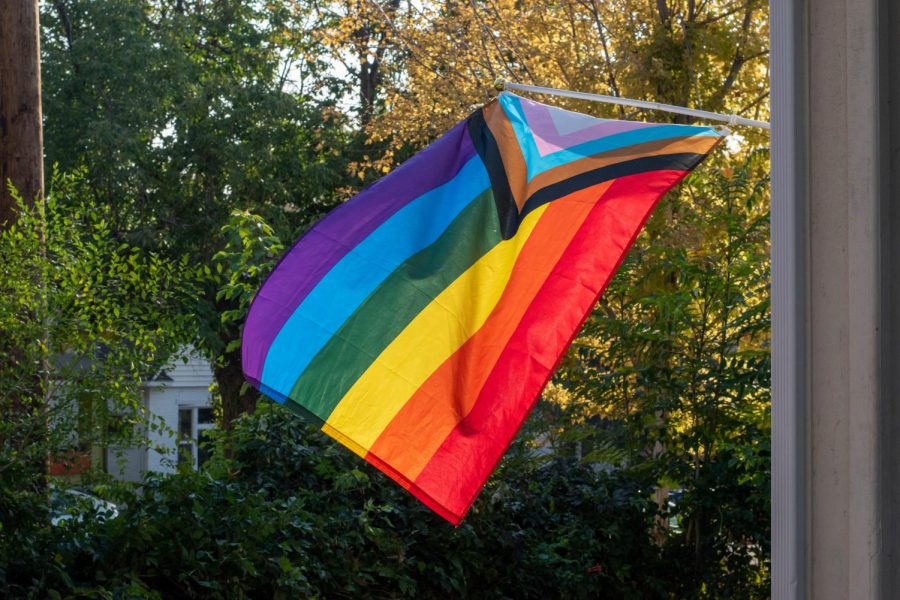 A pride flag hangs from a house in Salt Lake City, Utah on September 21st 2020. This design of the pride flag includes Black, Brown and trans pride. (Photo by Gwen Christopherson | The Daily Utah Chronicle)

It seems counterintuitive given the prominence of the Church of Jesus Christ of Latter-day Saints in our state, but Utah ranks 2nd in the nation for supporting laws that protect LGBTQ people. Salt Lake City is the 7th most queer city in the US, with 4.7% of residents identifying as LGBTQ as of 2015. Despite all of this, Senator Mike Lee is currently pushing a bill that would waive LGBTQ anti-discrimination laws for faith-based adoption, claiming it would “boost foster and adoption services.” Lee claims that some churches and faith-based groups have stopped offering adoption and foster services in states that require them to place children with same-sex couples because it conflicts with their religious beliefs. “It is difficult to know for sure what the effect of losing faith-based adoption and foster care providers has been,” he stated, without evidence.  “But it is likely to be substantial.”

If Lee truly cared about children, he would condemn hateful churches and be supportive of state adoption agencies and foster homes. This bill is not about finding homes for children — it’s about giving religious organizations leeway to discriminate against the LGBTQ community.

The bill, called the First Amendment Defense Act, was first introduced to the Senate in 2015. Sadly, five years later, Lee is still pretending that being hateful and homophobic is the same as exercising first amendment rights. As LGBTQ activists groups noted, the bill is discriminatory. After its poor reception, Lee made changes to the bill, framing it as protecting any federal marriage, including same-sex marriages. No matter what changes he makes to make the bill a bit more palatable, it doesn’t change its discriminatory nature.

Whether or not it passes, creating and pushing for this bill sends the message that LGBTQ parents are unfit to raise children. Why do religious entities need the right to deny adoption rights — it’s not like they have the best record at looking out for children. The catholic church has a controversial and extensive history of child sex abuse and cover-ups and the LDS faith was accused of using abuse victims hotline to hide sexual and abuse claims. It’s bafflingly hypocritical for faith-based organizations (and Lee, through this bill) to condemn LGBTQ parents when sexual abuse is rampant within organized religion.

Research shows LGBTQ parents “tend to be more motivated, more committed than heterosexual parents on average because they chose to be parents.” Children raised by same-sex couples fare just as well as those raised by heterosexual couples as well.  The “children loving” rhetoric is an excuse to push his theological ideals to legally discriminate against the LGBTQ community. “The need for foster and adoption families is great,” Lee admitted in his own report. “In 2018, more than 400,000 children were in foster care, and 18,000 left foster care without a permanent home.” 50% of these former foster children will end up homeless after aging out of the system. At the same time, roughly two million people in the LGBTQ community are interested in adoption — far more than enough to give every one of those children you’re advocating for a stable home and family.

Why isn’t Lee pushing for support and funding for existing Utah adoption agencies rather than hoping this discriminatory bill will cause church groups to “hop” in and find these children homes? With the religious demographic in Utah, Lee does bring a valid point about the number of adoptions faith-based agencies could provide. But why not advocate and ask for churches to practice tolerance, acceptance, and love — to work towards bettering the adoption and foster system? Ironically enough, those actions are supposedly the core beliefs and purposes of some of the most intolerant religions.

Using foster children to block a marginalized group from adopting is blatantly prejudicial and doing so on religious grounds is even worse. Mike Lee, I’m sorry you can’t openly discriminate against the LGBTQ community in this age without retaliation, but your bill speaks loud enough. Work on getting these children into homes and stop policing gay parents.