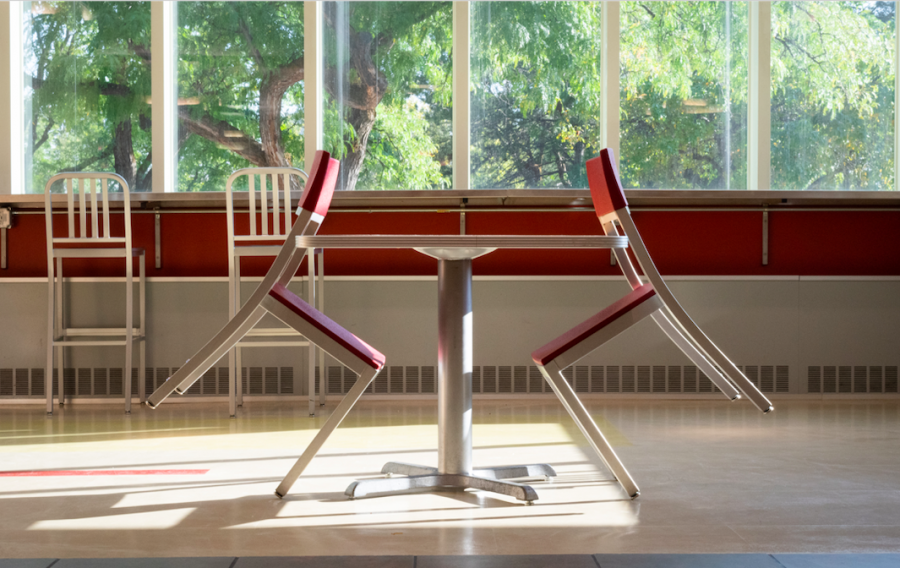 The coronavirus pandemic has changed the whole functionality and purpose of the A. Ray Olpin Student Union, with top-down changes being made in order for the community center to stay open.

According to the Union website, it is a place “Where parties and events draw thousands,” and “where academic and local communities come together.”

This goal, though, has had to change because of the pandemic, with all spaces reduced to half capacity and limits of 20 students, faculty, or staff allowed in certain rooms.

Almost all in-person events have been moved online, including the U’s weeks of welcome events, but Union administrators and other Union organizations plan to stay involved with the student community as mush as health restrictions will allow.

The Union has seen a large reduction in student traffic, with the number of students actually going to the recreation area or food courts being compared to the summer semester.

Second-year recreation assistant Tyler Birchenough said their main focus is to be there for students and people on campus to take time out of their day to relax from the stresses of school.

“With COVID and everything with the regulations, a lot of people don’t like wearing masks, there have been so many issues and complications, and people just stop showing up to the Union,” Birchenough said.

Along with ASUU and the Office of Fraternity and Sorority Life, the UPC is a main group within the Union that gets involved with student activities around campus. Lead this year by junior Ben Chenot, the UPC team has had to adapt the way they operate in order to follow coronavirus guidelines while also maintaining their relationship with the campus community.

“It’s changed significantly because our entire focus is event programming and we’ve had to make more than half of our events virtual,” Chenot said. “It’s completely new ground for us, so we’re kind of exploring creative ways to have that same community-building aspect of our normal programming to a virtual platform and try and maintain the value of those events.”

The UPC plans to do as many events as they can move online, such as bingo night, however, some events are difficult for them to move online. The Union Scholarship Celebration, which raised over $200,000 last year for need-based scholarships, was one event that had to be held virtually.

“So I think that’s one of the biggest things that like whenever you have a virtual event, it’s just really not the same socially. You don’t have the benefit of being able to kind of work together as much as we can transition virtually but obviously, a lot is lost,” Chenot said.

While the Union does generate money by selling space, advertisements, and receives some funding through facilities fee students pay, the Union, along with other affiliated organizations, have seen budgets decreases as a result of limited usage, forcing them to make cutbacks in several areas. The Crimson View restaurant and U-market at the Union have both closed until the next semester.

“Over the summer immediately that was just a lot of folks either canceling advertising packages or tweaking them to be a little bit smaller. Everyone was just making sure that their budgets, we’re going to stay on track,” Wilkerson said. “We just started taking a look at our budget and figuring out what exactly can we take off and ultimately we prioritized keeping as many jobs as possible.”

The Union employs many student jobs through the service desks, recreation areas, and building managers as well as employing some full-time staff members. While jobs have been retained, there have been cutbacks in other budget areas.

“There have been a lot of cuts in pay for the staff all around campus, but because of that, as far as a worker goes and as far as the other workers, we are unable to get raises at the moment just because we don’t have the funding coming into the, into the university, and I’d say that’s an effect caused by COVID but it’s kind of separate and affects us in a different way,” Birchenough said.

The lack of funding has also lead to some positions being understaffed and made it more difficult to maintain equipment like the lanes in the bowling alley or other maintenance areas.

“The University is going to do what they have to do to keep the Union running, and in doing so we are able to keep open and I’m still able to have a job which I’m very grateful for. A lot of people don’t have that opportunity,” Birchenough said. “Obviously it’s kind of frustrating and it kind of sucks, but it’s the world we live in right now.”

A  full list of the Union’s coronavirus safety measures and restrictions can be found at their website here.