The NFL’s Strange Saga in Response to Racial Justice 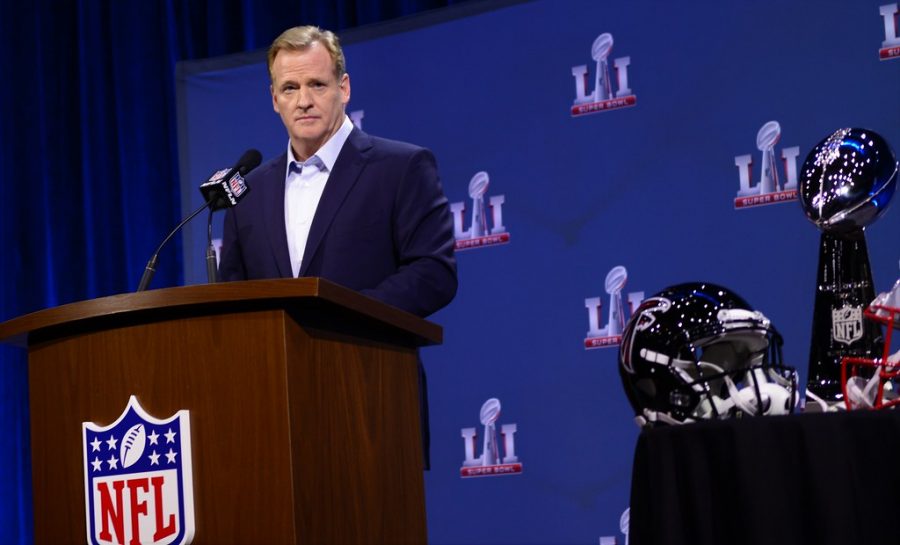 Roger Goodell taking questions at his State of the League press conference. (Image via Flickr)

Even though our own sporting events at the University of Utah have been put on hold, there is no shortage of professional sports to watch at the moment. Traditionally the fall favorite, in its first three weeks NFL football has had to compete with the NBA, NHL, MSL, NWSL and Professional Tennis. Not only has it hurt the NFL’s ratings, but it has exposed glaring issues with how the league has responded to social upheaval, particularly racial justice.

On June 5, the NFL tweeted a video from commissioner Roger Goodell in which he apologized for the NFL’s poor response in the past to players’ concerns—Colin Kaepernick’s specifically—over police brutality.

In the video, Goodell says, “We, the NFL, condemn racism and the systematic oppression of Black People. We, the NFL, admit we were wrong for not listening to NFL players earlier and encourage all to speak out and peacefully protest. We, the NFL, believe Black Lives Matter.” The post came a day after a video from players called out the NFL for not standing up sooner when players first voiced concerns over the league’s silence.

Another aspect of the NBA playing concurrently with the NFL is being able to witness differing strategies for addressing racial justice in real-time. The NBA’s 2020 playoffs were postponed in May after the World Health Organization declared COVID-19 a global pandemic. When the NBA brought back the playoffs in August, the league’s support for starting a conversation about racial justice in the wake of George Floyd’s death was overt. Supporting messages were painted on the floor for each game, players donned jerseys with social justice messages approved by the league. The Utah Jazz’s Donovan Mitchell wore the words “Say Her Name” in reference to the lethal police shooting of Breonna Taylor in Louisville, Kentucky where Mitchell played college basketball.

In a statement in the July lead up to the playoffs resuming, NBA Commissioner Adam Silver said, “The league and the players are uniquely positioned to have a direct impact on combating systemic racism in our country, and we are committed to collective action to build a more equal and just society.”

Some argued that it was an empty PR move for the league to embrace social justice now. Then came the shooting of Jacob Blake in Kenosha, Wisconsin. The Milwaukee Bucks would go on to boycott Game 5 against the Orlando Magic, with the Magic refusing a forfeit win and the rest of the teams following suit and walking out. The players received full support from their team owners, coaches and the NBA.

In contrast, the NFL has shown far less unified support for players voicing social justice concerns. In the NFL’s season opener, fans could see messages of support painted near the sidelines, and the pregame ceremonies paid tribute to victims of police violence. But there was no definitive strategy for what happened during the traditional playing of the National Anthem. Some players knelt while others stood linking arms. Some players and whole teams took to the locker room to avoid the issue altogether.

The gridiron is for football, but its influence travels many yards in all directions beyond the 32 field houses of the NFL. The late support the NFL is now showing is hard to not see as ill-prepared, feigned and hypocritical, and is about maintaining relevance in an evolving social culture. It’s not heartfelt or earnest. Trying to imagine a world where the NFL embraced teams refusing to play post-season games until their off-field concerns are heard is just that, imaginary.

This is a battle that will be fought elsewhere, on the streets of Portland, Minneapolis, Houston, Kenosha and elsewhere. But what the cause needs are allies to change hearts and minds. The NBA is honoring that role far better than the NFL.