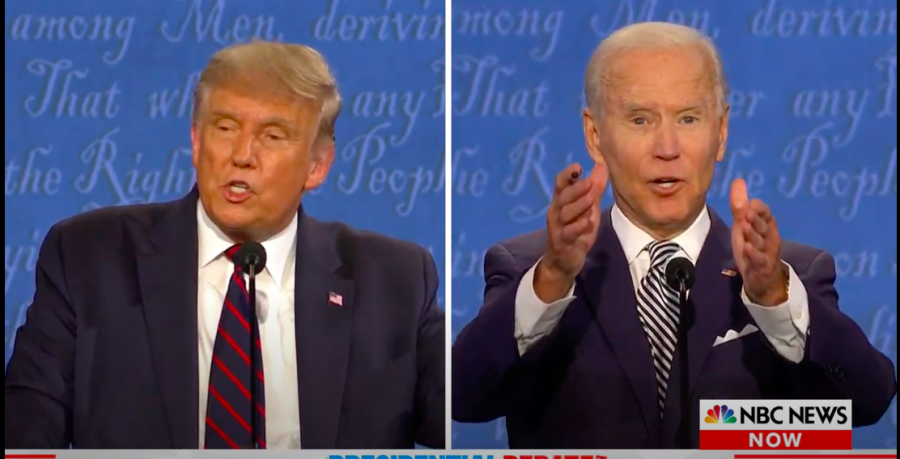 By Natalie Colby and Jack O'Leary

On Sept. 30 at 7 p.m., former Vice President Joe Biden and President Donald Trump met on stage for the first time in Cleveland, OH. to debate issues people will be voting on in Nov. While people tuned in to see what the candidates for 2020 had to say nationally, students at the University of Utah did the same. Some students gathered in Kahlert Village, on campus, to watch the debate together.

The debate lasted 100 minutes and was split into six topics selected by moderator Chris Wallace of Fox News. These topics included the candidates’ records, the Supreme Court nomination, COVID-19, the economy, race and violence within the U.S. and election integrity.

Each candidate originally agreed to two minutes of uninterrupted response to a question and then a set time for open debate.

Student watch-parties varied from a small group of friends to whole clusters gathered in common rooms to watch Trump and Biden enter the debate stage. After the first two minutes, many students were disappointed, but not surprised by the lack of respect illustrated from both nominees and the quick divergence into name-calling.

Freshman Alex Thibodeau said he did not feel like they were having a debate, rather politicians arguing over each other.

“I don’t really like it because it’s just like too immature. People just arguing and not like having a civilized debate about something. They’re not talking about the problems and the issues of the country and [figuering] out how to solve them,” Thibodeau said.

Each candidate called the other a liar. Trump periodically interjected to say  “wrong”  to Biden’s statements, and Biden told viewers they could not trust anything Trump said.

The New York Times compiled a list of statements from the debate which determined whether statements were true, false, misleading, or exaggerated.

Freshman Storey Peacock echoed similar sentiments of the debate. Peacock said both candidates kept speaking over each other during the debate.

“My favorite quote of the night was: ‘Will you shut up, man,’” Peacock said.

Biden spoke in a similar tone several times when asking Trump to let him speak. “It’s hard to get in any word with this clown,” Biden said in the debate.

“It’s quite comical the lack of respect on screen,” freshman Maggie Hammer said about the words exchanged.

Issues that were specifically addressed included the COVID-19 response, voter fraud, the economy and racial tensions in the country.

While every question may not have been fully answered, Freshman Garret Slack said some of the issues raised were important and the people have the right to know politicians’ stance.

“There were too many personal attacks against each other rather than attacking each other based on their policies. It was definitely expected— people knew it was gonna happen. But a good debate is attacking based on policy, nonpersonal opinions and things.” Slack said

The recent nomination of Amy Coney Barrett to replace late Justice Ruth Bader Ginsburg on the Supreme Court was a point of interest. On the topic, Biden was asked whether he would support ending the filibuster or packing the court, as his Democratic colleagues have suggested.

“Whatever position I take on that, that’ll become the issue,” Biden said. “The issue is, the American people should speak. You should go out and vote.”

Following the debate, freshman Trevor Coyle was left unsatisfied and wanted Biden to expand on his plans for law enforcement, the Green New Deal, among other things.

“I want Biden to expand on his plans for climate [change]  because he said that he does not believe in the Green New Deal, but then [he proposed his Biden plan]… so I want to know what he wants, what he would do specifically like I want him to lay it out and I want him to do that without being interrupted,” Coyle said.

Another moment that garnered attention on social media was Trump’s answer to being asked if he would condemn white supremacists and militia groups and tell them to stand down.

“Proud Boys stand back and stand by. But I’ll tell you what somebody’s got to do something about Antifa and the left,” Trump said.

There was also outrage from students on comments from Trump referring to the coronavirus pandemic as the “China Plague,” with students crying out and sighing, visibly frustrated.

Candidates directly contrasted the other’s answer on several occasions, including the final questions regarding the election and voter fraud.

While Biden said mail-in ballots were an accurate and safe way to vote, Trump insisted they are committing voter fraud by sending people two ballots and dumping ballots in the river.

According to BBC News while mail-in ballots may give an opportunity for fraud, “numerous nationwide and state-level studies over the years have not revealed evidence of major, widespread fraud.”

The debate concluded with Wallace asking if candidates would not declare preemptive victory and encourage supporters to stay calm while ballots are being counted.

Biden said he would, while Trump did not.

“If I see tens of thousands of ballots being manipulated, I can’t go along with that,” Trump said.

Musical theatre major Aathaven Tharmarajah said while the debate was horrifying to watch, he learned more about Biden’s plans and did not change his decision to vote for the Biden/Harris Ticket.

“I learned absolutely nothing about Trump’s plan for the future concerning anything… It honestly is just embarrassing to consider this guy the President of the United States. Now, I may not agree with everything Biden’s platform is about, but in my eyes, he won the debate,” Tharmarajah said.

U students will have the opportunity to experience a debate first hand, on Wednesday, Oct. 7, as Senator Kamala Harris and Vice President Mike Pence are set to debate inside Kingsbury Hall.