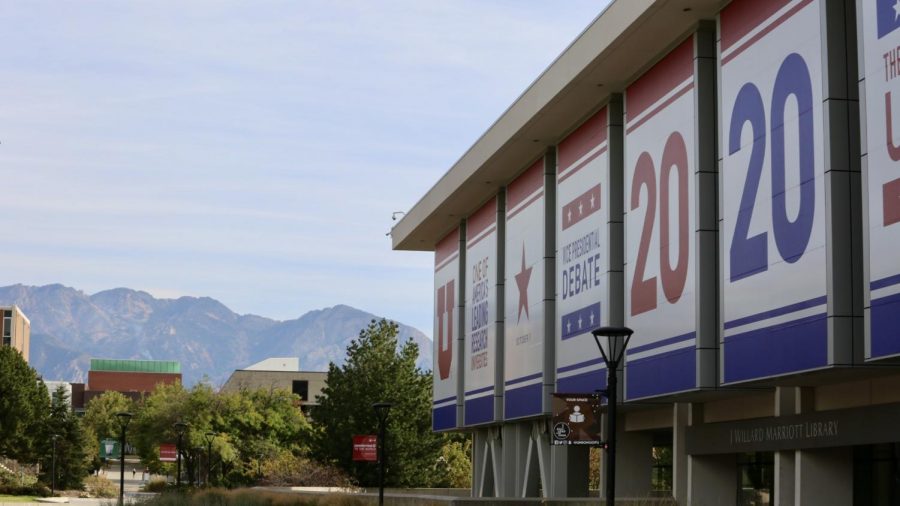 Advertisement for the 2020 Vice Presidential Debate on the Marriott Library at the University of Utah campus in Salt Lake City on September 28th 2020. (Photo by Camille Rousculp | The Daily Utah Chronicle)

As the University of Utah prepares to host the vice presidential debate, they held two events on Oct. 5, 2020 to inform students and fulfill final announcements. At 12 p.m., the Hinckley Institute of Politics hosted a forum titled: The Vice President, and at 1 p.m. the U live-streamed the drawing of tickets for viewing the debate via their Instagram.

Moderated by Jennifer Napier-Pearce, award-winning journalist and former editor of the Salt Lake Tribune, Juliet Carlisle, a political science professor, James Curry, another political science professor, and Boyd Matheson, the opinion editor of the Deseret News and host of KSL Radio, discussed the evolving role of the vice presidency, how this debate could affect the election, and Vice President Mike Pence and Senator Kamala Harris’ roles.

Panelists discussed the increasing significance of the vice president in the election, with both candidates being in their upper to late 70s.

Carlisle said, as the executive branch itself has increased its role, the president now comes in with an agenda and policy plans and has a greater emphasis on policymaking. This has caused the vice presidency to take on greater responsibility, one of the most notable examples being Bill Clinton giving Al Gore a wide variety of responsibilities, more than previous presidents.

“So we’ve seen that carried out throughout subsequent presidencies… there has been a lot of speculation in particular that with the age of the current candidates that the role of the vice president is going to have exceeding importance because of their advanced age, but typically the role of the vice president is to do a lot of fundraising for the tickets,” Carlisle said.

Despite the vice president pick not having much influence on elections in the past, Matheson believes this year it could be different, and maybe change the importance of the role.

“Historically, I don’t know that [the VP] has ever really determined the outcome of election, just doesn’t seem to have that kind of sway, I think this year may be a tipping point in that… with the age of both of the top of the ticket members…also with the recent health of the President, that these two nominees for vice president suddenly are very relevant and very important in terms of both stabilizing their political bases to make sure ‘hey there’s going to be a steady hand at the helm,’ and a positive influence regardless of what the health of the President might be,” Matheson said.

They also talked about why each candidate picked their running mate and what Pence and Harris bring to the table.

“You want somebody who reflects a part of the party that maybe the nominee doesn’t reflect and you want somebody that can also work well with the president,” Curry said.

In addition to those aspects, Curry also said Harris and Pence were chosen because they are different from their presidential candidates in many ways; Pence has more experience, knowledge of policy-making and an identifies as an evangelical Christian, and Harris is a woman of color, with differing views and strengths from Joe Biden.

“For most of American history presidential and vice-presidential nominees were selected because they came from opposite wings of their party,” Curry said.

While only 14 past vice presidents have become president, eight from succession after the president dies while in office, and five from being elected, panelists agreed Biden’s previous position as the vice president is a benefit to him for several reasons.

“[Biden] is running really as perhaps a healer-in-chief, he’s somebody who has a long career… I think he’s pulling on the idea that ‘Listen, I’ve never been at the extreme I’m somebody you can trust and somebody stable,’” Carlisle said. “So in a lot of ways, his connection to Obama and Obama’s popularity probably isn’t a liability at all. I think there’s still a lot of fondness for sort of these normal times, and I think that will really serve him.”

With Donald Trump’s recent coronavirus diagnosis, they answered an audience question about what will happen if the elected candidate dies before the inauguration.

Curry said if Trump or Biden were to die before election day, the party heads would meet to pick a new nominee and any votes cast towards either ticket would still count.

If they die after election day but before the electoral college meets, Curry expects the electors would simply vote for the vice-presidential nominee, but after that, they are in a place with no historical precedence.

“Long story short, is you really don’t want a presidential nominee to die, not only because they’re a human being and we shouldn’t want anyone to die, but because it is a very messy process, in part because of the way our presidential elections are run,” Curry said.

Viewers of the debate should not expect a debate similar to last week’s presidential debate, according to panelists.

“I think it will be much more of a policy discussion, which which is really interesting because I think they will probably layout better than the presidential debates what the first hundred days or what the first 500 days of an administration will look like in terms of policy,” Matheson said.

Carlisle also said this could be the last debate before Nov. 3, due to Trump’s health.

“I think there’s particular attention on the vice presidential debate than you might normally expect usually it’s sort of, you know, something that’s done but I think there’s probably going to be a lot more attention to the VP debate,” Carlisle said.

Looking beyond election day, Carlisle said if Trump wins reelection there will probably be no change in how the administration operates, however, she expects there will be a real partnership between Biden and Harris if they win.

Following the forum, the U went live on their Instagram account at 1 p.m., where U President Ruth Watkins and Swoop announced the students who will be in attendance in Kingsbury Hall on Wednesday, Oct. 7.

Out of all students that applied for a spot, 300 students were chosen and given a number, to protect student privacy. 60 numbers were chosen to attend the debate and five alternates were also chosen in case another cannot attend during the live-stream. Each student will receive an email with information about the next steps before the debate on Oct. 7.